At least 28 people, including JNU Students' Union (JNUSU) president Aishe Ghosh, were injured as chaos reigned on the campus for nearly two hours. 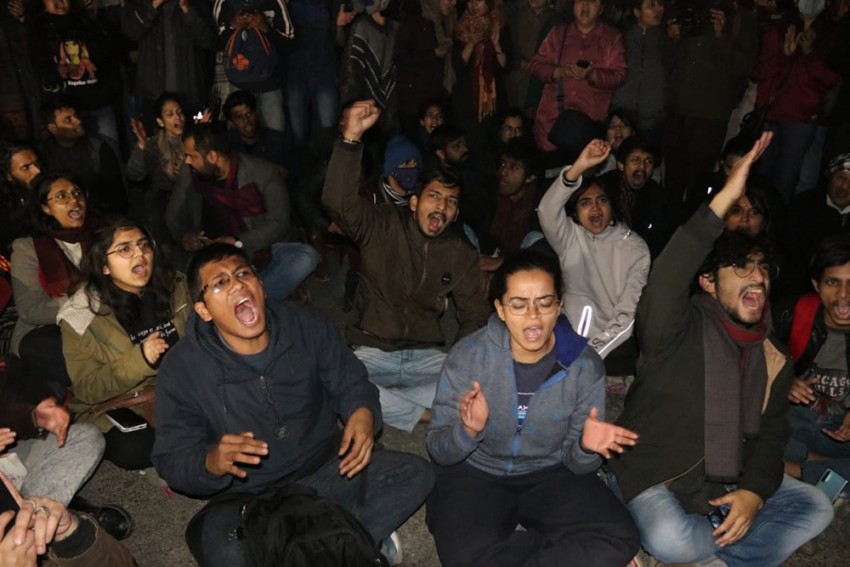 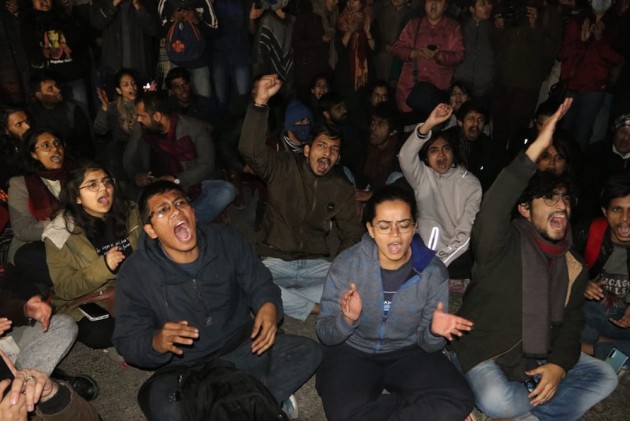 Tensions prevailed at Jawaharlal Nehru University (JNU) on late Sunday night following the violence on students and teachers by a group of unidentified masked men and women who entered the campus armed with sticks and stones.

With broken glass doors, windows and terrified students, the Sabarmati Hostel in JNU looked ravaged, solemn, on the night of January 5. The streets near the Sabarmati hostel were strewn with shards of glass. Cars were seen with damaged and broken windows.

JNUSU President Aishe Ghosh received a head injury after she was beaten up, she said. Video emerged of Ghosh bleeding. JNUSU Convener Apeksha Priyadarshini had a hand injury and her forearm was plastered. A few professors were also injured, including Sucharita Sen, who had to be taken to AIIMS.

At least 28 people were injured as chaos reigned on the campus for nearly two hours.

A blind student, pursuing M.Phil in Sanskrit, told Outlook on condition of anonymity that he was beaten up by unknown men inside his room in the Sabarmati hostel. He showed the windowpane above his door was broken. He said he received injuries on his left arm and back and was on a painkiller after visiting the hospital.

"Around 6:50 pm some people entered the hostel. They were hurling abuses. I locked my door as soon as I heard shattering of glasses. But they broke the windowpane above my door and beat the door so hard that the lock broke," the student said.

"They beat me even after I told them I was blind. I asked what have I done to you? Don't beat me. But they kept beating me and saying that I was lying about being blind. Then one of them said I was actually blind and asked them not to beat me anymore," he said, alleging that the attackers smelled of alcohol.

While JNU administration admitted to miscreants rampaging the campus and attacking people, it asked the police to tackle the situation.

However, the JNUTA alleged the police watched while the incident was taking place and did not help. They also accused the administration of being complicit in the incident.

"The way 70-80 people entered the campus, it was not possible without the administration's help," said a JNUTA member as the teachers' organisation demanded the resignation of VC Mamidala Jagadesh Kumar.

He said there was an earlier scuffle between students on Saturday, following which teachers had called a meeting around 4 pm near Sabarmati hostel. "After our meeting was over, one of our teachers was attacked by the 'goons' near Periyar Hostel. after that the goons came towards Sabarmati and pelted stones, beat students and teachers with rods."

After the incident civil society members, activists and students from other colleges gathered at the North Gate. Swaraj India leader Yogendra Yadav was manhandled here amid heavy police presence. A protest was also held at ITO outside police headquarters against alleged police inaction during the attack in JNU.

The Police carried teargas ammunition and rifles apart from batons outside JNU campus. Streetlights were turned off for hours while roads leading to the main gate were barricaded, restricting the movement of people and vehicles.

"It is after we repeatedly asked the police that they turned the lights on again," said JNUTA member, Prof. Avinash Kumar.

ABVP members blamed Left students for the incident and protested outside the main gate counter-sloganeering against other protesters and left-leaning JNUSU members.

A small scuffle broke out between ABVP cadres and other protesters, whose identity could not be ascertained.

After more than four hours of protest outside the main gate, the police opened the gate and students and protesters marched in.

"Delhi police is under Home Ministry. Amit Shah should be held accountable for what is happening in JNU," said D Raja, CPI General Secretary, who was present at the protest. He added, "I am here as a concerned citizen and the father of a student. Every concerned citizen in the country should worry about what is going on in JNU, how it is being destroyed by rightwing extremists and fascists."

Delhi Congress leader Nadeem Javed, who also arrived at the protest, said, "Counter debates with debates. But the way goons have been sent inside the campus to suppress dissent with the help of sticks and rods, is very saddening and disturbing." He added that Congress will stand beside the students in their fight.

Deputy Commissioner of Police (Southwest) Devender Arya told the media, "The situation inside the campus is normal. Extensive flag march conducted by police. All hostel areas have been secured. Police deployment has been done at strategic points."

However, around 1 am JNU students gathered near the gate to protest police presence and demanded they leave and stay outside the campus. They said they did not feel safe around the police after alleged incidents of police violence on students of Jamia Millia Islamia on December 15, 2019, during anti-CAA protests.

Asking why the police were in riot gear, JNUSU member Priyadarshini asked, "Why have you come like this? Are we going to hit you with books?"

The students also accused the police of not having a standing order to be present there at the time.

"Shockingly, the armed goons, with lathis and stones, were allowed to enter the campus and to freely run amok on campus, identifying and attacking students and teachers, pelting stones on teachers' houses, vandalising cars and property and entering women's hostels even as the campus security has silently stood by," their statement said.

The university has been under a near lockdown as students have been protesting for over two months against a massive fee hike in hostel, mess and security charges which could affect around 40% of the students whose families belong to low-income groups. Many of them have boycotted the semester examination December last year even after the administration said they would risk losing their studentship because of it.

'Must Be Traced, Hunted Down': Anand Mahindra On Mob That Attacked JNU