The 80-Km new road inaugurated by Defence Minister Rajnath Singh on Friday is expected to help pilgrims visiting Kailash-Mansarovar in Tibet in China as it is around 90 kms from the Lipulekh pass. 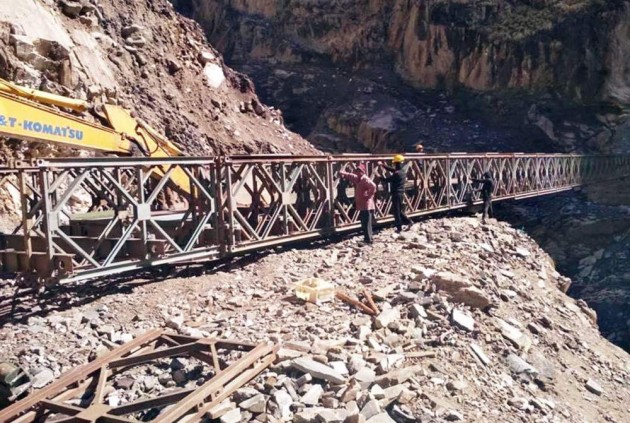 Nepal on Saturday raised objection over India inaugurating a strategically crucial link road connecting the Lipulekh pass at a height of 17,000 feet along the border with China in Uttarakhand with Dharchula, saying this "unilateral act" runs against the understanding reached between the two countries on resolving the border issues.

Nepal's Foreign Affairs Ministry in a statement said the government "has learnt with regret" about the inauguration of the link road connecting to Lipulekh pass, which Nepal claims to be part of its territory.

The 80-Km new road inaugurated by Defence Minister Rajnath Singh on Friday is expected to help pilgrims visiting Kailash-Mansarovar in Tibet in China as it is around 90 kms from the Lipulekh pass.

After inaugurating the road through video-conferencing, Singh said pilgrims going to Kailash-Mansarovar will now be able to complete their journey in one week instead of up to three weeks. The road originates at Ghatiabagarh and ends at Lipulekh pass, the gateway to Kailash-Mansarovar.

The Kailash-Mansarovar yatra involves trekking at high altitudes of up to 19,500 feet, under inhospitable conditions, including extreme weather and rugged terrain.

Raising objection to the construction of the link road, Nepal's Foreign Ministry said, "This unilateral act runs against the understanding reached between the two countries including at the level of the Prime Ministers that a solution to boundary issues would be sought through negotiation."

Lipulekh pass is a far western point near Kalapani, a disputed border area between Nepal and India. Both India and Nepal claim Kalapani as an integral part of their territory - India as part of Uttarakhand’s Pithoragarh district and Nepal as part of Darchula district.

"The Government of Nepal has consistently maintained that as per the Sugauli Treaty (1816), all the territories east of Kali (Mahakali) River, including Limpiyadhura, Kalapani and Lipulekh, belong to Nepal," the ministry said.

"This was reiterated by the Government of Nepal several times in the past and most recently through a diplomatic note addressed to the Government of India on November 20, 2019 in response to the new political map issued by the latter," it said.

It said that Nepal had expressed its disagreement in 2015 also through separate diplomatic notes addressed to the governments of both India and China when the two sides agreed to include Lipulekh pass as a bilateral trade route without Nepal’s consent in the Joint Statement issued on May 5, 2015 during the official visit of Prime Minister Narendra Modi to China.

"With this in mind, the Government of Nepal has proposed twice the dates for holding a meeting of the Foreign Secretaries of the two countries, as mandated by their leaders, for which the response from the Indian side is still awaited," it said.

"The Government of Nepal remains committed to seeking diplomatic solutions to boundary issues on the basis of the historical treaty, documents, facts and maps in keeping with the spirit of close and friendly ties between the two countries," the ministry said.

The ministry has also noted that the reports prepared by Nepal - India Eminent Persons Group (EPG) formed with a mandate to recommend measures and institutional framework with a view to elevating the existing relations, if implemented, will pave way to address outstanding issues left by the history.

Meanwhile, Nepal Police on Saturday detained dozens of youths and students as they held a demonstration near the Indian Embassy here to protest the inauguration of the link road.

The protesters, including student activists of the All Nepal National Free Students Union (ANNFSU) affiliated to the ruling Nepal Communist Party and youth leaders urged the government to take steps to stop India from using the road.

"The recently inaugurated road section in Pithoragarh district in the state of Uttarakhand lies completely within the territory of India. The road follows the pre-existing route used by the pilgrims of the Kailash Mansarovar Yatra," MEA spokesperson Anurag Srivastava said.

"Under the present project, the same road has been made pliable for the ease and convenience of pilgrims, locals and traders. India and Nepal have established mechanism to deal with all boundary matters," Srivastava said.

He said the boundary delineation exercise with Nepal is going on and India is committed to resolve outstanding issues with the neighbouring country through diplomatic dialogue and in the spirit of close and friendly ties.

Lipulekh pass is a far western point near Kalapani, a disputed border area between Nepal and India. Both India and Nepal claim Kalapani as an integral part of their territory.

Srivastava said both India and Nepal are in the process of scheduling foreign secretary-level talks which will be held once the dates are finalised after the two governments successfully deal with the COVID-19 crisis.

The new road is expected to help pilgrims visiting Kailash Mansarovar in Tibet as it is around 90 km from the Lipulekh pass. The road originates at Ghatiabagarh and ends at Lipulekh Pass, the gateway to Kailash-Mansarovar.

The construction of the road began in 2008 and was scheduled to be completed in 2013, but it got delayed due to the tough terrain in the portion between Nazang to Bundi village.