There is a forecast of moderate to heavy rain/thundershowers in the city and suburbs with the possibility of very heavy to extremely heavy rainfall in isolated places. 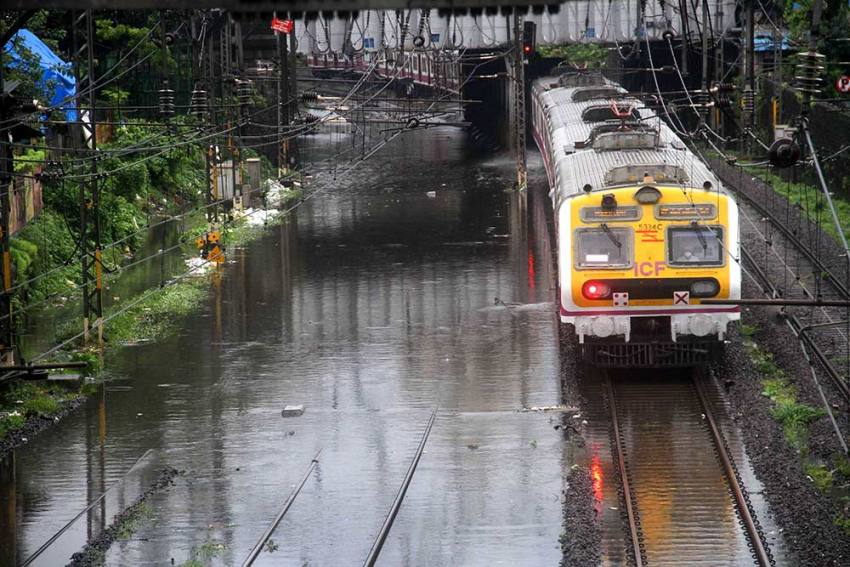 After a brief spell of reduced intensity, the rains in Mumbai picked up pace again, causing inundation in some areas and to disrupting local train services, officials said.

On Sunday, 30 people were killed in the metropolis in rain-related incidents, including 19 in Mahul area of Chembur where a retaining wall collapsed on some houses after a landslide.

On Monday, no fresh death was reported, an official from the Brihanmumbai Municipal Corporation (BMC) said.

Local train services of the Central Railway were affected due to water-logging on tracks between Vikhroli and Bhandup following heavy showers in parts of the suburbs, CR's chief spokesperson Shivaji Sutar said.

The suburban train services were suspended in that section of the main line from 10.35 am to 10.50 am as a precautionary measure, he said.

Trains are being run at a cautious speed between Kanjurmarg and Vikhroli stations due to heavy rain," Sutar said.

The station yard in neighbouring Thane was also water-logged and as a result, trains were running slow, railway sources said.

In the Kasara Ghat section, located about 130 km from Mumbai, a mudslide occurred on one of the three rail lines early Monday morning, Sutar said.

Traffic was affected only on the down line due to the mudslide, but trains were running on the middle and up lines, according to the Central Railway.

According to BMC officials, there is a forecast of moderate to heavy rain/thundershowers in the city and suburbs with the possibility of very heavy to extremely heavy rainfall in isolated places.

According to civic officials, bus services of the Brihanmumbai Electric Supply and Transport (BEST) were running normal.

Thackeray had directed the agencies to remain more alert and asked authorities to keep a watch on landslide-prone areas and dilapidated buildings.