The camps will be held between November 25 and December 15 across 1,059 mandals in the state. 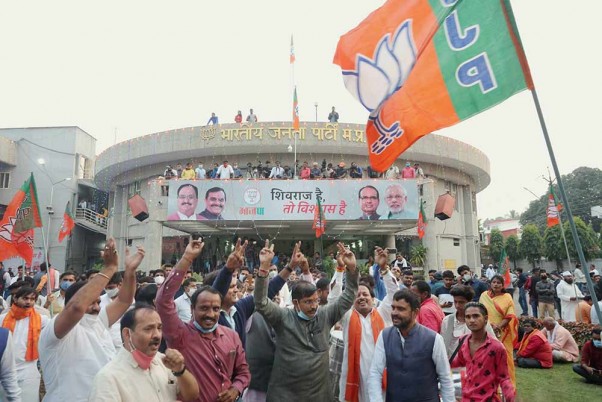 Buoyed by the impressive showing in the recent Madhya Pradesh Assembly bypolls, BJP's state unit has decided to hold training camps for its cadres starting this month with the aim of expanding its support base, a party office-bearer said on Saturday.

The camps will be held between November 25 and December 15 across 1,059 mandals in the state.

After senior leader Jyotiraditya Scindia quit the Congress and joined the BJP earlier this year, scores of his followers also joined the saffron party.

When asked whether these camps are being held primarily for such workers, Vijayvargiya denied saying that such training programmes are held in the BJP every two years.

"Nothing should be read into it," he said.

"Such programmes strengthen and expand the organisational base and encourage partymen to work with dedication towards promoting ideology," he added.

Out of the 28 Assembly seats in MP where the bypolls were held on November 3, the ruling BJP won 19, while the opposition Congress bagged nine.

In March this year, 22 Congress MLAs, mostly loyalists of Jyotiraditya Scindia, had resigned from the party and from their Madhya Pradesh Assembly membership.

This led to the collapse of the Kamal Nath-led Congress government in the state and cleared the way for the BJP to regain power after 15 months in the state.

Scindia and his loyalist MLAs joined the BJP, with many of them becoming ministers in the Shivraj Singh Chouhan-led state government. Later three more Congress MLAs resigned from state assembly and joined the BJP.