Manali has topped the list of 11 Himachal Pradesh towns having cleanest air and has even taken over Shimla’s past ranking of number 1 city in the north having best Air Quality Index (AQI). 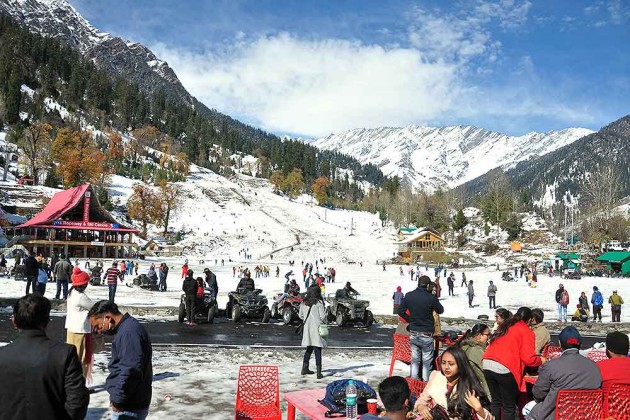 The popular hill station of Manali in Himachal Pradesh, which hit the headlines for all the wrong reasons in July after a massive surge of tourists amid Covid-19 and viral photos of crowds, has got good news for visitors hoping to breathe cleaner air and look for blue skies.

In some good news for tourists, Manali has topped the list of 11 Himachal Pradesh towns having cleanest air and has even taken over Shimla’s past ranking of number 1 city in the north having best Air Quality Index (AQI).

The AQI data released by the HP State Pollution Control Board (HPSPCB) has rated Manali at number 1 with AQI at 31 followed by Dharamshala at 41 and Shimla—the capital city - at 45.

Parwanoo –a semi-industrial town and gateway to Shimla has also recorded clean air with AQI at 44, even lower than Shimla. The air became cleaner in August 2021 when the AQI dropped significantly to 24.

Of those towns having a bad air quality, Baddi, an industrial hotspot in Himachal Pradesh has AQI at 114, which even rose to the 159-mark in April despite the Covid lockdown .

Apoorv Devgan, Member Secretary HPSPCB, said the Board has undertaken regular monitoring of the air quality in 11 major towns and setting up 25 monitoring stations under the national Ambient Air quality monitoring programme.

“We also have a plan of action in place for various interventions in towns exceeding the air quality limit. We don't have that much of an issue as far as gaseous emissions are concerned but places like Baddi, Brotiwala, Nalagarh are in the critical zones where the dust particulates cause discomfort in the breathing. Significantly, our tourist hotspots are cleaner, blessed with natural scenic beauty, greenery and cleaner skies."

Devang said the central government has recently provided funding to the board to undertake steps like improving roads and construction of pavements and even afforestation and plantation works.

With Chandigarh setting up its first air purifier in the Transport Nagar area under a pilot project, Himachal Pradesh can certainly take pride in being a state gifted with the best environment and natural green cover that can keep pollution under check to a great extent.

"The day we think of such air purifiers, it will be a bad day for Himachal Pradesh. Surely, we will not reach that stage," Devang said.

Towns like Damtal, Nalagarh, Kala Amb and Paonta Sahib have a slightly higher ratio of pollution.

Manoj Chauhan, a senior scientist at HPSPCB  said, "We sometime feel the influx of tourist vehicles will result in bad air quality in places like Manali or Shimla. But our data is showing us something else. Baddi-Barotiwala has the highest number of transportation vehicles and it is a problem area as road conditions are also not good. The new technologies being used in automobiles have also helped to reduce emissions".