In a video clip that has gone viral on social media platforms, some Nihangs are seen standing as the man lies on the ground in a pool of blood with his chopped off left hand lying next to him. 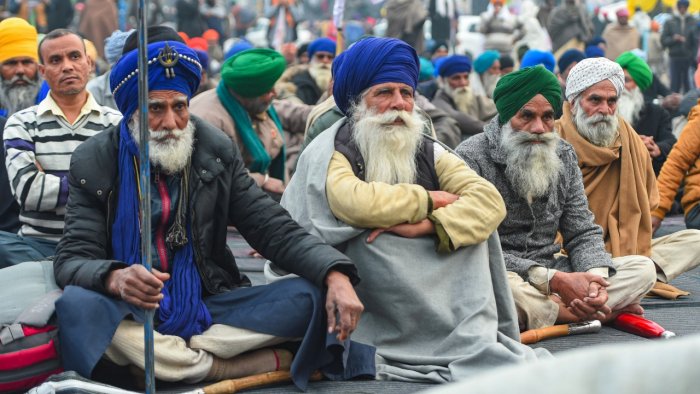 In a brutal incident, a man was found lynched with his hand chopped off while his  body was tied to a metal barricade at a farmers' protest venue at Kundli near the Delhi-Haryana border.

A group of Nihangs are being considered as the perpetrators behind this gruesome act.

The viral video clip that emerged on social media platforms showed presence of some Nihangs  around the deceased as he lies on the ground in a pool of blood with his chopped off left hand lying next to him.

The Nihangs are heard in the clip saying the man has been punished for desecrating a holy book of the Sikhs.

The Samyukta Kisan Morcha (SKM), an umbrella body of farmer unions that is spearheading the protests at Delhi's borders against three agriculture laws of the Centre, said a group of Nihangs has claimed responsibility for the brutal killing after the deceased allegedly attempted to desecrate the Sarbloh Granth, a holy book of the Sikhs.

Senior farmer leader Abhimanyu Kohar told PTI that the group of Nihangs, which allegedly killed the man, was not part of the SKM's protests and strict action should be taken against the culprits. He claimed that the victim was staying with the same group of Nihangs for some time.

The deceased, Lakhbir Singh, was a labourer from Cheema Khurd village in Punjab's Tarn Taran and was aged around 35 years, police said, adding that the body was found tied to an overturned police barricade near a stage put up by the farmers protesting at the site for over 10 months.

The farmers' protest site is located close to the Delhi-Haryana border at Singhu.

"The Kundli police station received information at 5 am that a body was found near the farmers' protest site," a Sonipat police official said.

He said the deceased was found wearing only a pair of shorts.

"We have registered a case and further investigations are on to find out the culprits," Additional Director General of Police, Rohtak Range, Sandeep Khirwar told PTI over the phone.

The Sonipat police said they tried to question some people near the protest site regarding the incident.

Initially, some people resisted the entry of the police force in the area and were not cooperating, they added.

The video clip shows the Nihangs asking the man where had he come from.

The deceased is heard saying something in Punjabi and pleading before the Nihangs. His body bears wounds.

The clip shows the Nihangs repeatedly asking him who had sent him for committing sacrilege.

One of them says the man is a "Punjabi" and not an outsider, and it should not be made into a Hindu-Sikh issue. Another raises a religious chant.

The Nihangs are a Sikh order, distinguished by their blue robes and often seen carrying spears.

A case of murder has been registered at the Kundli police station in Sonipat against unidentified persons, police said.

Asked about the video clip circulating on social media platforms, a Sonipat police official said the matter is being investigated.

The body has been sent to the Sonipat civil hospital for post-mortem.

A Haryana police spokesperson said in Chandigarh that the man died soon after the Sonipat police team reached the spot.

"Some people were standing there. When the police tried to take the body away, they protested. After some efforts, the body was brought to the civil hospital," the spokesperson said.

In a statement, the SKM said it wants to make it clear that "both the parties to the incident, the Nihang group and the deceased person, have no relation with the Samyukt Kisan Morcha".

The peaceful and democratic movement of the farmers is opposed to violence in any form, it added.

The SKM said it is against the desecration of any religious text or symbol, but that does not give anyone the right to take the law into their own hands.

"A Nihang group at the scene has claimed responsibility, saying the incident took place because of the deceased's attempt to commit sacrilege with regard to the Sarbloh Granth," the farmers' body said.

It demanded that the culprits be punished in accordance with law after investigating the allegation of murder and conspiracy behind sacrilege.

"As always, the Samyukt Kisan Morcha will cooperate with the police and the administration in any lawful action," it added.

Thousands of farmers, mostly from Punjab, Haryana and western Uttar Pradesh, have been camping at three border points of Delhi -- Singhu, Tikri and Ghazipur -- for over 10 months, demanding a repeal of the three farm laws enacted by the Centre in September last year.