Several visuals have emerged from the incident showing the sword-wielding mob barging out of the gurdwara, breaking the barricades put up by police, and attacking the policemen. 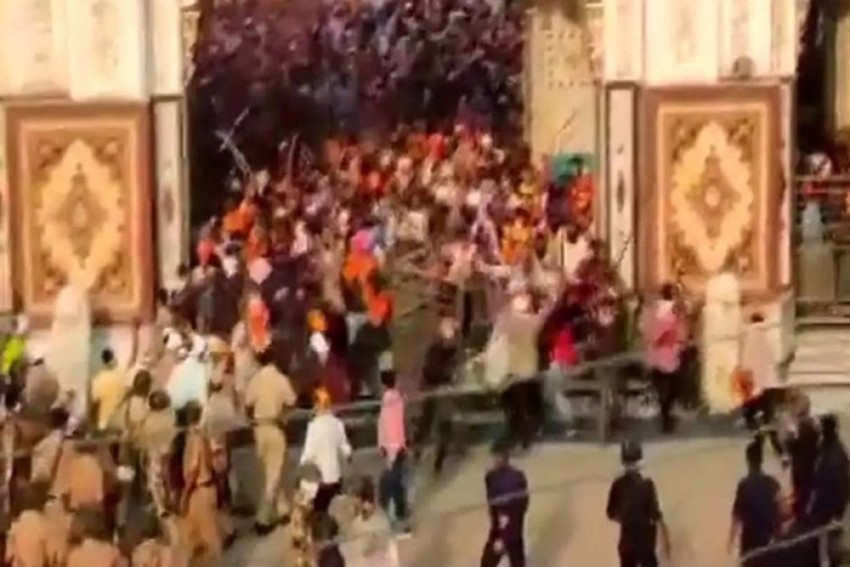 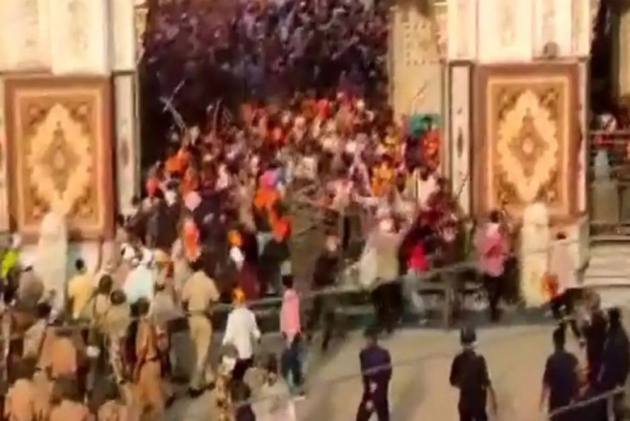 As many as 22 people have been arrested by police on the charge of attempt to murder following the attack on policemen by a mob of sword-wielding Sikhs in Maharashtra's Nanded after they were denied permission to hold a public procession due to the Covid-19 pandemic, an official said on Tuesday.

The Wazirabad police in Maharashtra's Nanded district have identified and named 74 people in three FIRs registered in connection with Monday's incident at the Sri Hazur Sahib Gurudwara, and filed cases against over 500 unidentified people.

All the arrested accused and wanted persons have been booked on the charges of attempt to murder, rioting, and under provisions of Arms Act.

Several visuals have emerged from the incident showing the sword-wielding mob barging out of the gurdwara, breaking the barricades put up by police, and attacking the policemen. Several vehicles were also damaged in the violence.

Seven policemen were injured and eight vehicles were damaged in the violence. The condition of one of the injured policemen was serious, the official said.

The police were also trying to ascertain if anyone from the gurdwara committee had any role in the incident, he said.

"We have arrested 22 people till now on charges of attempt to murder, rioting, and under provisions of the Arms Act and other sections. Around 74 people have been named in the FIRs, while search is on for others," Deputy Inspector General of Police, Nanded Range, Nisar Tamboli told PTI.

The officer on Monday said permission for the Hola Mohalla public procession was not granted due to the coronavirus pandemic.

"The gurdwara committee was informed and they had assured us that they would abide by our directives and hold the event inside the gurdwara premises," he had said.

However, when the Nishan Sahib was brought at the gate around 4 pm on Monday, several participants started arguing and over 300 youth stormed out of the gate, broke the barricades and began attacking the policeman, he had said.

Nishan Sahib is a triangular saffron-colour flag furling outside a gurdwara on a steel pole covered with a saffron cloth. The flag also has an insignia called Khanda in the middle, which includes two swords and a chakra.

Hola Mohalla (Hola) is a Sikh festival that comes a day after Holi.

Unlike Holi, when people sprinkle coloured powder on each other, Hola Mohalla is an occasion for Sikhs to demonstrate their martial skills.

Nanded is an important Sikh pilgrimage centre as it is home to the sacred shrine - the Takht Sachkhand Sri Hazur Abchal Nagar Sahib.

It was here that the 10th and last Sikh Guru, Guru Gobind Singh (1666-1708), anointed the holy book Guru Granth Sahib as the eternal Guru of Sikhism and spent the last 14 months of his life.

Fire Breaks Out At Garments Factory In Delhi’s Gandhinagar