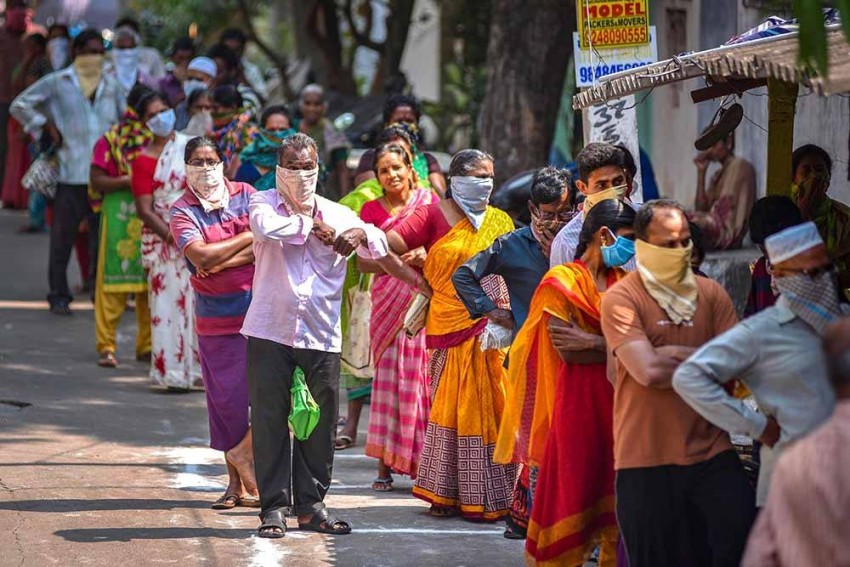 People stand in a queue to receive ration, supplied by the government, during a nationwide lockdown, imposed in the wake of coronavirus pandemic, in Vijayawada
PTI Photo
PTI 2020-03-30T11:36:20+05:30 Maharashtra: Congested Dwelling Led To COVID-19 Spread In 25 Members Of Sangli Family 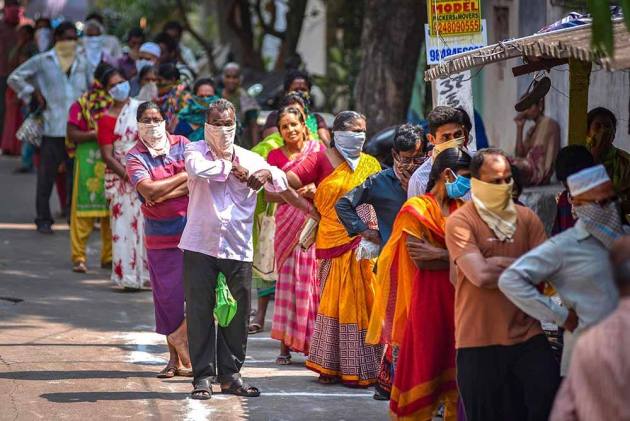 The 25 coronavirus patients reported from one family at Sangli in Maharashtra were found to be living in a congested setup, which might have led the infection to spread fast among them, officials said.

Initially, four family members who returned from Saudi Arabia tested positive for coronavirus on March 23. Within a week of it, 21 more family members, including a two-year-old boy, were found to have contracted the infection.

The district administration, however, maintained that so far there is no 'community transmission' of the viral infection, as only known contacts have been exposed to it.

"These 25 patients from Islampur tehsil belong to a big family living in a congested housing set up and because of that, they got infected," Collector Abhijeet Chaudhari told PTI on Sunday.

District civil surgeon C S Salunkhe said all the patients are from one big family and they live "side by side" in Islampur.

"Majority of the family members were in touch with each other round-the-clock, that is why the exposure took place," he told PTI.

The family's secondary contacts have not been infected, so community transmission is ruled out, he said.

"If a coronavirus positive person coughs in the house, his droplets spread on objects in the room. The common objects are handled by everyone in the house and this is the way the
virus spreads," he explained.

He, however, said since all the positive cases are from one "vertical" (family), it is actually better from the control point of view.

"Following the detection of initial cases, we admitted several people from the family even if they did not have any symptoms and that proved beneficial as we could detect a large
number of cases," said Salunkhe.

In fact, the detection of the large number is good because if they remained undetected, all these coronavirus positive people could have been roaming in the community, he
said.

"After the detection of all these positive cases, the issue got highlighted in the town and people chose to stay indoors," he added.

When Chaudhari was asked about any lapses in quarantining the four family members who returned from Saudi Arabia, he said they arrived at the Mumbai airport on March 12
and that time, the stamping process was not started.

"The four family members should have taken precaution by remaining in home quarantine after they came back to Sangli," he said.

The list of Sangli residents returning from foreign locations which was shared with the district administration, did not have names of these four passengers in it.

"These four people were traced during our own checking here on March 18," he said.

The collector said a 'containment zone' has been created in one-km radius of the area where the family lives in Islampur and 325 of their 'non-close contacts' have been home quarantined to further check the spread of infection.

"There is no community transfer as exposure to the virus has taken place only among known contacts. But as a precautionary measure, we have set up a containment zone in one km radius where the cases were found and health screening of people is going on," he said.

Samples of 47 family members and their close-contacts were sent for testing and 25 of them turned out positive for coronavirus.

"All the 25 family members are currently admitted at an isolation facility in Sangli. They are undergoing treatment and their health is stable," Chaudhari said.

"Though the remaining family members have tested negative, we have kept them under institutional quarantine and they are being monitored," he said.

At least 325 non-close contacts of the family have also been traced and home quarantined and a medical team is monitoring their health, he added.