Mahagathbandhan Leaders Should Clarify If They Support Ram Mandir Or Not: Shah

Amit Shah said Rahul Gandhi will also not reply to such questions but will look for a way to increase the dates in this case. 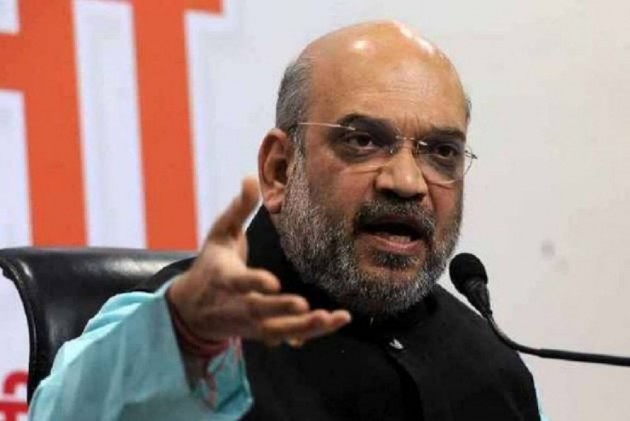 With general elections around the corner, BJP National President Amit Shah once again raked-up Ram Mandir issue and asked ‘Mahagathbandhan’ leaders to clarify if they support construction of temple in Ayodhya or not.

While addressing a party workers’ rally at Budha Talab indoor stadium, Raipur on Thursday evening, Shah opined that after the air cross-Loc air strike, the Indian borders were safer.

Referring to past incidents when heads of Indian soldiers were chopped, he said BJP government after Uri attack did surgical strike and after Pulwama attack blew up terrorist camps in Pakistan.

“After this incident (air strike) a strong signal went across globe that one cannot play with boundaries of India,” he said.

Revisiting the disputed Ram Mandir issue he said- “Bhartiya Janta Party is committed to build Ram Mandir in Ayodhya,” and alleged that advocates inclined towards Congress party ideology are delaying the case in court.

“Mahagathbandhan leaders should make it clear that whether they support the construction of Ram Mandir in Ayodhya or not,” Shah said while adding that Rahul Gandhi will also not reply to such questions but will look for a way to increase the dates in this case.

According to Shah, through National Register of Citizens (NCR) the BJP government on prima-facie basis has identified 40 Lakh intruders in North East.

“They are no vote bank for us, this is a matter of national security for us,” he claimed.

He also questioned the decision of Chhattisgarh government to ban CBI entry in the state and charged that the intention of current state government was to engage in corrupt activities.

He also criticized Congress government in state for changing name of schemes in Chhattisgarh and claimed that BJP had never done such acts.

“Rahul Baba (Rahul Gandhi) had announced hike in paddy procurement prices, but now they are having sweats in cold. The condition is that the government has to take loan from Reserve Bank of India,” Shah quipped.

Mentioning liquor ban in Chhattisgarh as promised by Congress in its election manifesto during the last assembly elections, Shah said that they (Congress) are now saying that it is complicated task.

“Congress had promised to half the power tariff in state but they have stopped only at 400 units,” Shah added.