The polling for the third phase of Lok Sabha elections has begun. Follow us for live updates.

The polling for the third phase for seven phase Lok Sabha elections has started. Polling is being held in the 116 seats, spread across 14 states and Union Territories.

Besides, polling is also being held in four seats in Assam, five in Bihar, seven in Chhattisgarh, one in Jammu and Kashmir, 14 in Karnataka, 14 in Maharashtra, six in Odisha, 10 in Uttar Pradesh, and five in West Bengal.

3:20 pm: Man standing in a queue to vote killed in clashes between Congress and TMC workers in  West Bengal's Murshidabad.

12:39 pm: Supreme Court issued a notice to Rahul Gandhi after not being satisfied with his response. Next hearing on April 30.

11:57 am: Actor Sunny Deol arrives at Bharatiya Janata Party office, he will join the party shortly.

11:25 am: Veteran actors Mammootty and Mohanlal cast their votes in Kochi and Thiruvananthapuram respectively.

11:17 am: 6% of 92.56 lakh voters exercised their franchise in the first two hours of polling Tuesday in six Lok Sabha and 42 assembly constituencies of Odisha.

11:05 am:  Moradabad: BJP workers beat an Election Official at booth number 231 alleging he was asking voters to press the 'cycle' symbol of Samajwadi party.

11:00 am: "I really want to contribute something to the country & whatever our PM has done in the last 5 years, I want to take that legacy forward," Gautam Gambhir.

10:43 am: Kashmiri Pandits cast their votes at a Special Polling Station in Udhampur, for Anantnag parliamentary constituency.

10:39 am: West Bengal: Three TMC workers injured after a crude bomb was hurled at them. The incident took place in Domkal municipality in Murshidabad.

10:33 am: Younger brother of Mulayam Singh Yadav, Abhay Singh Yadav after casting his vote at a polling booth in Saifai, Mainpuri.

10:09 am: Numerous complaints of malfunctioning EVMs reported across Kerala.

Earlier in the day, some attempts were made to capture a booth in ward number 7 of the Domkol municipality in West Bengal's Murshidabad.

9:57 am: BJP will come third in this fight: Pinarayi Vijayan.

"The election fight in the state is between LDF and UDF. The BJP will be be at the third position at all the constituencies in the state. The over-ambitions of many in Kerala will come to an end with this elections" Pinrayi Vijayan.

"Elections have happened a number of times, but this election is not an ordinary one. It will decide whether the rule of those who destroyed the Constitution will prevail or that of those who want to preserve its samman (sanctity). It has to be decided that, whether those destroying the society will govern or those who take the country on the right track will get the reins of power," Gandhi said.

8:49 am: PM Narendra Modi after casting his vote in Ahmedabad says, " The weapon of terrorism is IED, the strength of democracy is voter ID."

8:35 am: PM Narendra Modi casts his vote at a polling booth in Ranip, Ahmedabad.

8:07 am: Your vote is precious and will shape the direction our nation takes in the years to come, says Narendra Modi.

Urging all those voting in today’s Third Phase of the 2019 Lok Sabha elections to do so in record numbers. Your vote is precious and will shape the direction our nation takes in the years to come.

I’ll be voting in Ahmedabad in a short while from now.

8:04 am: Kerala CM Pinarayi Vijayan queues up to casts his vote. 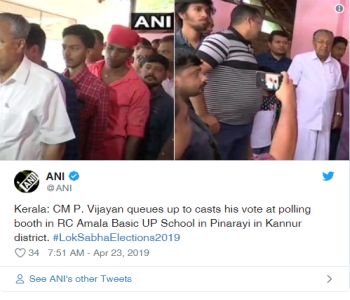 7:30 am: Prime Minister Narendra Modi meets his mother at her residence in Gandhinagar today. 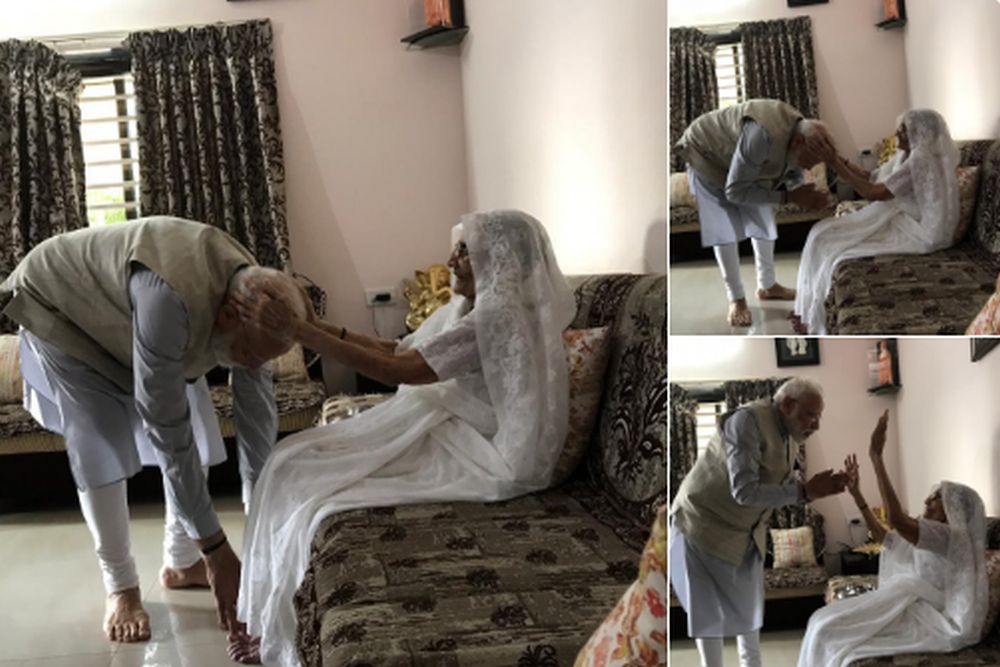 People are voting to make Narendra Modi the prime minister once again. The issue right now is in whose hands the country is safe. The BJP will win 26 out of 26 seats in Gujarat. The kind of development that has happened in the last 5 years did not happen in 50 years: Gujarat Chief Minister Vijay Rupani

6:55 am: Visuals of a polling booth in Wayanad

#Kerala: Visuals from a polling booth in Kalpetta, in Wayanad; All 20 Lok Sabha constituencies in the state go to polls today in the third phase of #LokSabhaElections2019 pic.twitter.com/SCrZ1QI3jK

6:50 am: Visuals of prepration from a polling booth in Vadodara

Gujarat: Visuals of preparation from polling booth number 162 in Sayajigunj of Vadodara. Voting for the third phase of elections begins at 7 AM today. #LokSabhaElections2019 pic.twitter.com/TyqtOi4Zj7

In Maharashtra, the prominent seats in the third phase include Jalna, where state BJP president Raosaheb Danveis in the fray against Vilas Autade of the Congress, and Baramati, where Supriya Sule, the daughter of NCP chief Sharad Pawar, is contesting against BJP's Kanchan Kul.
Among the key contestants in the fray are BJP president Amit Shah who is contesting from Gujarat’s Gandhinagar, Congress president Rahul Gandhi, who is contesting from Wayanad in Kerala and Samajwadi Party patron Mulayam Singh Yadav from Uttar Pradesh’s Mainpuri.