During a discussion on the PM Cares Fund, Thakur 'threatened to expose' those in the Gandhi family who benefited from the PM National Relief Fund. 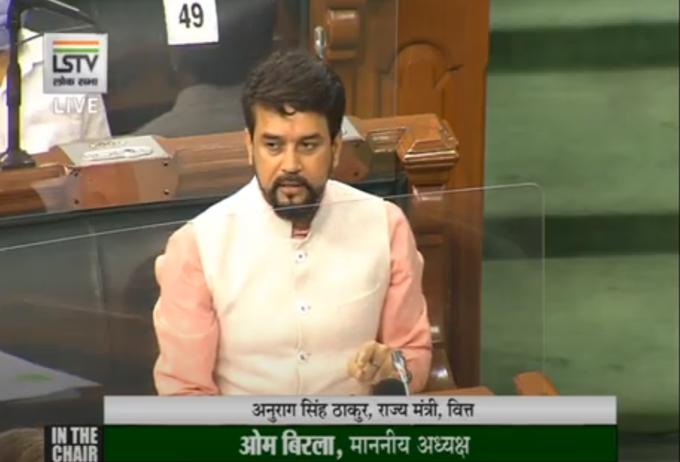 Lok Sabha has been adjourned after protests over MoS Finance Anurag Thakur's remark on Jawaharlal Nehru and Gandhi family.

The ruckus happened during the introduction of the Taxation and Other Laws (Relaxation and Amendment of Certain Provisions) Bill, 2020.

After speaking for sometime, Finance Minister Nirmala Sitharaman said that her deputy Anurag Singh Thakur will talk about PM-CARES Fund.

Opposition members raised concerns about the fund and while speaking, Thakur alleged that the Congress had misused the PM Relief Fund.

During a discussion on the PM Cares Fund, Thakur "threatened to expose" those in the Gandhi family who benefited from the PM National Relief Fund.

"Nehru ji ordered the creation of Prime Minister's National Relief Fund in 1948 like a royal order but its registration has not been done even till today. How did it get FCRA clearance?" said Union Minister Anurag Thakur in Lok Sabha.

"PM-CARES Fund is a public charitable trust which has been set up for the people of India. You (Opposition) created trusts for Gandhi family. Nehru and Sonia Gandhi have been members of PM's National Relief Fund. There should be a debate on this," he added.

Speaker Om Birla warned members against standing up and speaking, saying that then they would be suspended from the House.