Home  »  Website  »  National  »  Lies, Biases, Denials: Why Police Do Not Care About Their Image

The violence on Jawaharlal Nehru University (JNU) campus on Sunday evening and the alleged police inaction against the perpetrators, who rampaged through the campus and beat students, has once again raised many a question on the police force. 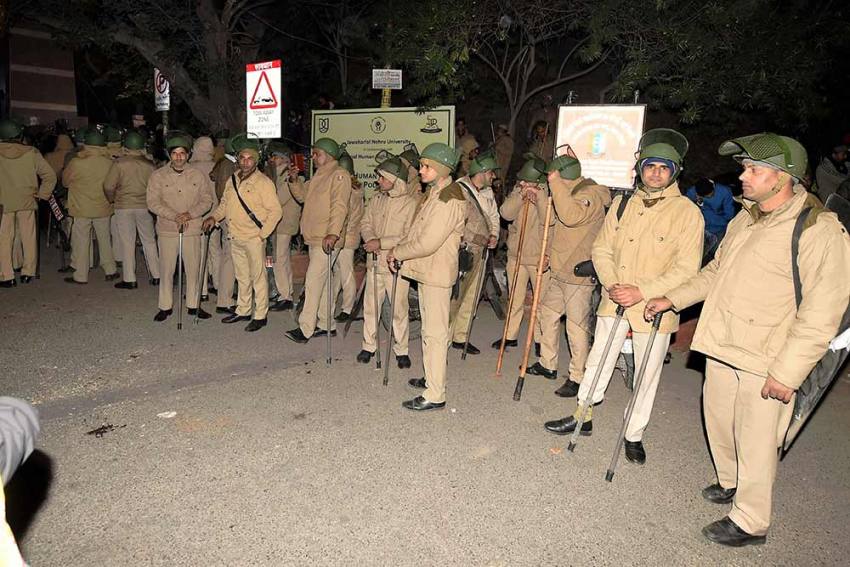 Policemen at out side of the JNU after some masked miscreants attacked in the campus, New Delhi.
PTI Photo/Shahbaz Khan
Salik Ahmad, Mirza Arif Beg January 06, 2020 00:00 IST Lies, Biases, Denials: Why Police Do Not Care About Their Image 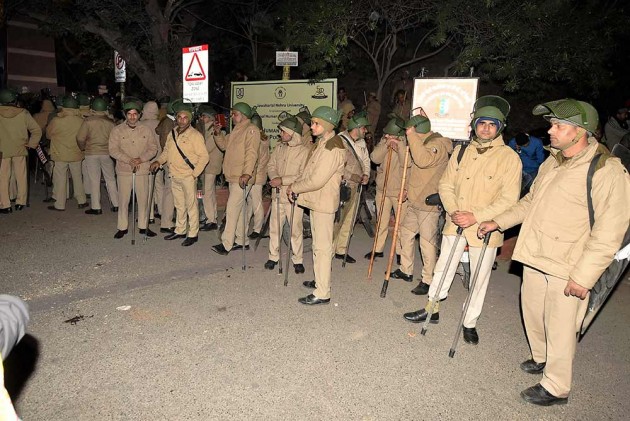 Denial is almost always the first response and they think they will get away once the dust settles on the issue, says Vibhuti Narain Rai, a retired IPS officer, when asked why the police are always inconsistent with their narrative and don't care about their image.

The violence on Jawaharlal Nehru University (JNU) campus on Sunday evening and the alleged police inaction against the perpetrators, who rampaged through the campus and beat students, has once again raised many questions on the police force.

Their crackdown on students of Jamia Millia Islamia, Aligarh Muslim University (AMU) and people in different cities of Uttar Pradesh for protesting against the controversial Citizenship Amendment Act (CAA) and National Register of Citizens (NRC) is a case in point.  Numerous accounts of excesses, including assault under detention, in Uttar Pradesh, have also surfaced.

Even though at least three students -- two at Safdarjung Hospital and one at the Holy Family Hospital -- alleged they had suffered bullet injuries, the police repeatedly denied they had opened fire on protesters. Three weeks after that claim, The Indian Express reported that an investigation into the violence revealed that three bullets were fired by two police personnel in "self-defence".

On Sunday, January 5, a group of masked men and women, armed with sticks and stones, entered JNU and brutally assaulted students and teachers. All this in the presence of Delhi Police. The group, eyewitnesses allege, acted with impunity, while the police stood there as  mute spectators.

"They do it to flatter the ruler of the day. For example, they overreacted in Jamia Millia Islamia and didn't act at all, it seems, during a mob attack on JNU," Rai told Outlook over the phone.

When asked why does the police force always lie initially, Rai said we shouldn't forget they are part of a society that thrives on lies. "The Indian society lies and they are part of the same community. Even when a culprit is caught red-handed, their parents maintain that they have been framed," he said.

Similarly, the police also try to get away by giving inaccurate information, he said. "Of course, it's not that easy anymore since everything gets recorded on camera phones these days."

Rajiv Gupta, a former professor of sociology at the University of Rajasthan, says the police would worry about their image only if the "state was worried".

"The police are a state apparatus and the state clearly has given legitimacy to violence and atrocities... If the character of the state was truly welfarist, it would reflect in the attitude of the police with the civilians," he said.

Gupta added that at JNU, the police just stood and watched while in AMU and Jamia, they actively perpetrated the violence.

"The police have become subordinate to the state, not the constitution. The state's behaviour is partisan and so is the behaviour of the police.

"The state has steadily polarised institutions and created social divisions. All democratic norms have not just been undermined but disintegrated. It's a stark element of fascism and Nazism and was witnessed in Germany," he said.

Another former IPS officer Prakash Singh, who rose to the post of Director General of Police and has been pushing for reforms in the institution, disputes that the police don't care about their image and adds that a number of variable factors determine their action on the ground in a given situation.

"Police are always forced to defend the action of the government and in that process, it gets thrown -- voluntarily or involuntarily -- in a situation of confrontation with the public," he said. "Among all the government agencies," Singh says, "The police is the most convenient punching bag."

Speaking of denial, Singh says, "Defensive mechanism is always used first because which it's becoming tougher by the day."

"No thief accepts he or she has stolen something. It's a standard response that you get," he said.

Dilip Cherian, a communications consultant and a political campaign advisor, says the police are perhaps under the impression that "given the circumstances, the choices they have are very few. They, therefore, want to buy into a narrative, whatever the narrative is visible."

"They believe that the dominant narrative is going in a different direction and many of the officers have unwillingly or unwittingly purchased the narrative. And therefore, they are not conscious of the fact that they might be damaging their own cause," he said.

On Monday, 34 people, including students and faculty members, who were admitted to the trauma centre of the All India Institute of Medical Sciences, were discharged on Monday morning, officials at the institute said.

Meanwhile, students in universities across India and even abroad staged protests, condemning violence on their counterparts and teachers at JNU.