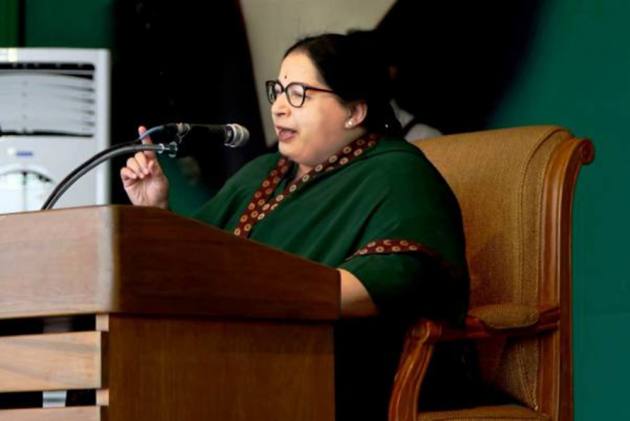 Wednesday, February 24 marks the 73rd birth anniversary of Jayalalithaa, Tamil Nadu’s film heroine-turned-political leader, who went on to become chief minister four times. The strong woman of Tamil Nadu politics ruled more like an empress as ministers fell at her feet and even felt happy just touching the front tyre of car reverentially, giving birth to the derisive term of “tyre lickers” to denote spineless sycophants.

True, Jayalalithaa’s tenure got sullied by corruption scandals that saw her being unseated twice. And its remnants were felt early this month along the Bengaluru-Chennai highway when her friend turned “non-biological” sister Sasikala Natarajan drove back home triumphantly --- after serving four years in jail for corruption. Jayalalithaa could escape going back to jail on the same charge only because she passed away in December 2016.

Sasikala’s road show was aimed at reclaiming her position as the true political heir of Jayalalithaa – which she had usurped by becoming the AIADMK general secretary first and almost becoming chief minister in February 2017 before she was halted by the Supreme Court and sent to jail. In her absence, the AIADMK split into two as Jayalalithaa’s stand-in O. Panneerselvam and Sasikala’s nominee Edappadai K. Palaniswami joined hands and took control of the party and the government.

In the last four years, the EPS-OPS duo had firmly established themselves as the true legatees of Amma while Sasikala languished in jail and her nephew floated a new party to keep her flag flying – though with little impact. The return of Sasikala, called Chinnamma by her followers, was generally expected to result in a patch-up between the two sides so their combined might could take on a resurgent DMK. But that was not to be as EPS said a firm no to making peace with Chinnamma. Now her supporters want her to retake the AIADMK from the hands of these two – a tall order.

The AIADMK’s ruling duo and their ministers are averse to giving even a toehold to the Sasikala family knowing their past history of spreading their tentacles to reestablish their mafia-like hegemony in the AIADMK. So EPS, with OPS firmly backing him, has chosen to project himself as the true inheritor of Jayalalithaa’s political legacy leaving no space for Sasikala. The legacy war saw a few collateral damages --- the closure of memorials of Jayalalithaa at the spot where she lived and was buried – to prevent Sasikala from making that symbolic visit.

On Wednesday, AIADMK leaders led by EPS and OPS would pay their homage to Amma by garlanding her statue they had erected in front of the party headquarters in Chennai. Sasikala, who has not stirred out of her relative’s house, may choose to pay her respects to her elder sister Jayalalithaa by showering flower petals on Amma’s photo which would be duly telecast by her family-run TV channel. Such an underwhelming birthday show by the once powerful Chinnamma will show the world that she still has an uphill battle to claim her late friend’s legacy.

The real battle for Jayalalithaa’s political legacy though would be fought in less than two months when Tamil Nadu elects its next Assembly. If the EPS-OPS duo manages to stave off 10 years of anti-incumbency and recapture power they would be the undisputed heirs of Amma. Even if they fall short of coming to power but still win a substantial chunk of seats to emerge as the main Opposition party that would firmly relegate Sasikala to the sidelines, especially if her nephew’s party fails to open its account.

When Jayalalithaa’s political mentor MGR died in 1987 he had left behind a similar fractious political legacy between his widow and Jayalalithaa. But after Jayalalithaa’s faction emerged as the number two in the Assembly in 1989, MGR’s widow withdrew from the scene and let the two factions merge to become a unified AIADMK. Jayalalithaa’s legacy may not appear so tattered but the coming elections will put a stamp of authority on who actually inherits Amma’s legacy.