During the second round of talks to discuss draft agreement and operationalisation of the Kartarpur corridor at Wagah, India asked Pakistan to permit not just Indian nationals but also Persons of Indian Origin (PIOs), holding OCI cards. 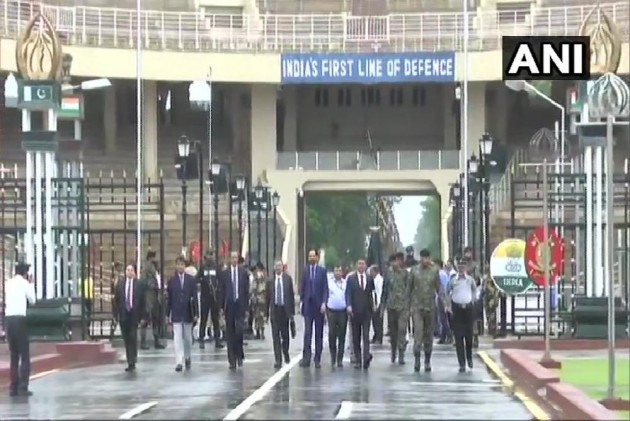 Pakistan agreed in-principle to allow visa-free, year-long travel for Indian passport holders and OCI card holders to the Kartarpur Sahib Gurdwara using the Kartarpur Corridor, after a bilateral meeting between India and Pakistan in Wagha to decide the modalities of the pilgrimage concluded on Sunday. Pakistan has also agreed to allow 5,000 pilgrims, every day,  to visit the Gurdwara on foot, both as individuals or in groups, Home Ministry's Joint Secretary (Internal Security) S.C.L. Das told reporters in a press conference.

India had initially put forth a demand to allow at least 5,000 pilgrims to visit Gurdwara Kartarpur Sahib and had also asked that the corridor should be open for not just Indian nationals but also Persons of Indian Origin (PIOs), holding OCI cards.

Indian had also raised the demand of allowing 10,000 additional pilgrims to visit the Kartarpur Sahib Gurdwara on special occasions.

To this, the Ministry of External Affairs has said that Pakistan highlighted the infrastructural constraints on their side and conveyed that they may be able to accommodate many of the Indian proposals in a phased manner.

India has conveyed its apprehensions about the possible flooding of "Dera Baba Nanak and adjoining areas in India as result of earth filled embankment road or a causeway that is proposed to be built by Pakistan on their side," according to news agency ANI.

"Details of the bridge that India is building on its side were shared and Pakistan was urged to build a bridge on their side.

"This would address flooding related concerns and ensure a smooth pilgrimage. Pakistan agreed, in principle, to build the bridge at the earliest," Ministry of External Affairs in a statement said.

Dr Mohammad Faisal, Spokesperson for Pakistan's Ministry of Foreign Affairs said that the two countries had agreed to almost 80% of provisions during the talks and another meeting might take place to discuss pending concerns.

Since the construction of the bridge over the old Ravi creek is still pending, India has also offered to make temporary arrangements to ensure the corridor becomes operational in November 2019, give the significance of 550th Birth Anniversary of Guru Nanak Dev Ji.

The Kartarpur shrine in Pakistan's Narowal district across the Ravi is where Guru Nanak Dev, the founder of Sikhism, spent his final days, and is highly revered by the Sikh community. It is about 4 km from the Dera Baba Nanak shrine in Gurdaspur.