In Karnataka bye-elections, the battle is between the loyalists and the defectors. 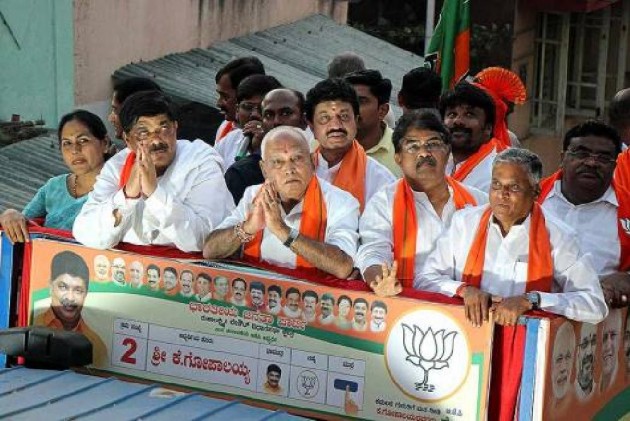 Here’s the story in a nutshell – The BJP is in power in Karnataka, having defeated the previous government, a Congress-Janata Dal (Secular) coalition, in a trust vote in July this year. But that took place in a truncated assembly with 17 ruling coalition legislators (and a couple of independents) absent. These 17 legislators were subsequently disqualified by the Speaker and so the seats fell vacant.

To settle in comfortably for the remaining three years, the BJP needs a majority in the full house. The party has 105 seats currently in the 224-member Karnataka Legislative Assembly. It needs eight more seats for a simple majority. So, all eyes are on these 15 seats (polls in the 2 other vacant seats haven’t been announced yet).

Now, some details – The 17 disqualified MLAs had moved the Supreme Court challenging the Speaker’s order but the verdict upheld their disqualification. Since there’s no bar on contesting the bypolls, most of them are now in the fray to win their seats back. Not surprisingly, the BJP has handed party tickets to 13 of the defectors whose ‘sacrifice’ helped the party come to power.

The confusing part – Former Congress and Janata Dal (S) legislators are defending their constituencies and are contesting on BJP tickets. The BJP’s own partymen, who were their rivals in the last election, have either turned rebels or switched parties.

The case in point is Kagwad assembly constituency where the same two rivals are facing each other but in a reversal of roles: Shrimant Patil, who held the seat for Congress before he was disqualified, is now the BJP candidate; and Raju Kage, the local BJP leader, is now the Congress candidate.

Karnataka Deputy Chief Minister Laxman Savadi is in a similar predicament. In Athani, where he hails from, Savadi had lost the 2018 election to Mahesh Kumathalli of Congress. Now, with Kumathalli in the BJP fold, Savadi has to ensure that his former opponent wins.

In Hoskote, the BJP has fielded (MTB) Nagaraju, another disqualified MLA. But that didn’t go down well with Sharath Bachegowda who was the party’s face in 2018. Bachegowda is now contesting as an independent against BJP’s Nagaraju. The JD(S) hasn’t fielded a candidate in this seat, in a gesture of support to Sharath. Interestingly, in 2008, Sharath’s father B N Bachegowda had quit the JD(S) and won the Hoskote on a BJP ticket, defeating Nagaraju who was then with Congress.

More confusion – The rumbles in the short-lived Congress-JD(S) coalition – and there were many – were often at their loudest in Belgaum where local strongman Ramesh Jarkiholi chafed at the coalition set-up. Jarkiholi, then a minister from Congress party, gave the coalition a scare or two early on and was subsequently dropped from the cabinet, only to be replaced by his brother Satish Jarkiholi. Now, he’s in the BJP, contesting the bypoll at his pocket-borough Gokak. Fighting him is the other sibling Lakhan, now the Congress candidate.

The Jarkiholis are among Belgaum’s many powerful families and have always had a presence across political parties. Siblings Ramesh and Balachandra are in the BJP while Satish and Lakhan are with Congress.

Finally, the implications – Predictably, there are other facets to all the action. Naturally, the BJP needs the numbers to prove majority.

Political analysts reckon that Chief Minister B S Yediyurappa, pushing 77, will need an emphatic win to re-assert himself in his party. So too will Congress leader Siddaramaiah, currently Leader of the Opposition. Meanwhile, the JD(S) is hoping to land smack in the middle of the number game and play a decisive role yet again.