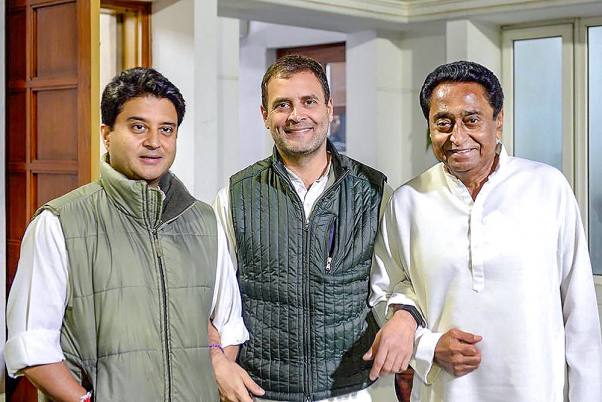 It took the Congress party 15 years to return to power in Madhya Pradesh in December 2018 but just 15 months to let the hard-earned victory slip away. With Congress leader Jyotiraditya Scindia joining the BJP later on Tuesday, the fall of the Kamal Nath government in M.P is a foregone conclusion.

So far 21 MLAs from Scindia's camp have resigned from the Vidhan Sabha after the erstwhile Gwalior royal's recent meeting with Prime Minister Narendra Modi and Union Home Minister Amit Shah. Scindia drove to meet Modi at the Prime Minister's 7, Lok Kalyan Marg earlier on Tuesday and is likely to formally announce his decision to join the BJP.

The resignation submitted by Scindia is dated March 9. Congress sources say it had not been formally submitted to party president Sonia Gandhi.

Gandhi met AICC General Secretary KC Venugopal on Tuesday morning at the time when Scindia was meeting PM Modi. She had decided to expel Scindia from the Congress for "anti-party activities".

Sources say the discussion between Scindia and the BJP had been going on for some months now. While Union minister Narendra Singh Tomar handled the negotiations from the BJP's side, a confidante of Scindia told Outlook that a senior member of Gujarat's erstwhile Baroda royal family too was roped in to convince the Congress leader to defect. Scindia's wife, Priyadarshini Raje, is a Baroda royal and her family is learnt to have close ties with the BJP and Modi. In 2014, when Modi had contested his first Lok Sabha poll from Baroda (he had also contested simultaneously from Varanasi, the seat he later retained), the Rajmata of Baroda's Gaekwad dynasty was among the four proposers of Modi's candidature.

Outlook had reported earlier that Scindia was seriously weighing his options on severing ties with the Grand Old Party ever since he lost out to Kamal Nath in the race for becoming MP chief minister. In May last year, when Scindia lost the Lok Sabha poll from his Guna constituency, his patience with the Congress began running thin. While many of Scindia's loyalists in MP had urged him to launch a regional party, the former Union minister felt joining the BJP served his political interests best.

Scindia's decision to quit the Congress coincides with the 75th birth anniversary of his father, the late Madhavrao Scindia. Madhavrao Scindia was a Congress stalwart who served as Union minister under different Congress regimes and was elected to the Lok Sabha for nine terms, without ever losing an election. In 1980, Madhavrao's defection to the Congress from the Jana Sangh - the BJP's earlier avatar co-founded by Vijayaraje Scindia - had helped the Congress consolidate it's position further in the Gwalior-Chambal region and came as a major embarrassment to the Jana Sangh and Vijayaraje Scindia, the then Rajmata of Gwalior.

Sources say Scindia has been assured of a Rajya Sabha nomination from MP and induction into the Modi cabinet with an important portfolio as a reward for his defection from the Congress. In MP, his loyalist legislators - including six cabinet ministers -  who had flown to Bangalore on Monday will, however, need to resign from their Vidhan Sabha seat before they can switch to the BJP to avoid being slapped with the anti-defection law. Whether the BJP rewards these defectors in the near future will depend on their own success in getting re-elected to the MP Assembly.

However, six of the legislators returned to Bhopal over the weekend and asserted full support for the Congress government. Two Congress legislators - Hardeep Dang and Raghuraj Kansana - are still missing and there is speculation that they might join ranks with the Scindia loyalists and quit to bring down the Nath government.

Both Scindia and Digvijaya are eyeing a Rajya Sabha seat from their home state. Additionally, Scindia had also been lobbying to be named the state Congress president with immediate effect - a position currently held by Nath. Digvijaya and his loyalists, who outnumber Scindia's in MP, did not want the MP Congress chiefs post to go to the Gwalior royal. Sources say Scindia had communicated to the Congress high command that his patience with the party is fast running out and his loyalty to the party which his father, the late Madhavrao Scindia, had also served dedicatedly should not be taken for granted.

For the Congress, Scindia's defection could trigger a larger crisis too as it may encourage his contemporary from Rajasthan - deputy chief minister Sachin Pilot - to follow suit. Pilot's unease within the party ever since he was overlooked for the chief minister's post in December 2018 in favour of old warhorse Ashok Gehlot is common knowledge. Though Pilot continues to be Gehlot's deputy and also Rajasthan Congress chief, he wants a greater say in party matters and a position commensurate with that. Speculations about Pilot toying with the idea of launching a regional party in Rajasthan have been made several times over the past year. Revolts from leaders like Milind Deora in Maharashtra and Jitin Prasada in UP cannot be ruled out either.