Thousands of JEE and NEET aspirants at Kota, India's biggest coaching hub, continue to protest on social media with videos demanding the postponement of exams till the coronavirus pandemic shows a decline in numbers. 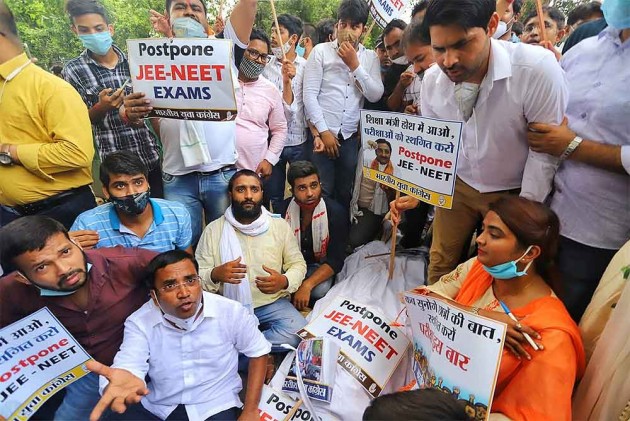 Thousands of Joint Entrance Exam (JEE) Main and the National Eligibility and Entrance Test (NEET) aspirants at Rajasthan's Kota, India's biggest coaching hub, continue to protest on social media with videos demanding the postponement of exams till the coronavirus pandemic shows a decline in numbers.

After the National Testing Agency (NTA), which conducts the exams, clarified that the JEE and NEET will take place as scheduled, students, as well as the coaching institutes in Kota, have registered their disagreement. They called the move to conduct the exams, meant for admissions to engineering and medical colleges, "insensitive."

"I still remember those restless two weeks in April when hundreds of students like me wanted to go back to their hometown in Uttar Pradesh in the middle of the pandemic. And finally, we left Kota in buses. But most of us had to return to Kota fearing that exams might be slated any day and we had opted for Kota as the test centre," said  18-year-old NEET aspirant Ranjit Singh Rajput. "But thousands of our batchmates who studied here with us in the coaching centre are unable to reach their centres. And especially with the rise in deaths due to the Covid-19, it's scary to take exams right now", Rajput, who hails from Uttar Pradesh and is presently in Kota, told Outlook.

Most of the students who underwent coaching from Kota institutes are also protesting on social media and posting their videos on Facebook and Twitter against the arrangements done by the government.

"Not every city has an exam centre. Students along with their parents will have to move to another city for the examination centre. Also, how can they ensure the social distancing aspect? Moreover, it's inhumane to appear for exams with masks on for three hours," another NEET aspirant Jaya, who is presently stuck in Kota, told Outlook. "Unlike JEE, the NEET exam requires pen and paper, which again is a threat of spreading of this deadly virus", she said.

Echoing Jaya's concerns, JEE aspirant Manas said, "What about those students whose family members have contracted Covid and are in quarantine? How will they appear for exams? The examination authorities have been insensitive all this while. There will be movement of lakhs of students as well as their parents which will lead to more Covid cases."

Meant for admissions in medical colleges and IITs, JEE which is a computer-based test, is slated to be held between September 1 and 6 while the NEET (UG), a pen- paper-based exam, will be held on September 13. However, the government has said that they have made all arrangements to ensure a smooth conduct of both exams. The Ministry of Education (MoE) has reiterated its commitment to go ahead with the exams next month.

Reacting to the ongoing debate across the country over the postponement of entrance tests, the coaching centres of Kota, which cater to almost 1.5-2 lakh students every year, are of the opinion that the exams should be delayed. The coaching-centre owners have urged that multiple exams should be held in order to allow each aspirant to appear at their convenience.

"For the privileged class, it won't be an issue but for those who live in remote areas, reaching an examination centre will be risky. There is no transport facility in villages. Everyone should get a fair chance to appear in the exams", Pramod Maheshwari, Director at Career Point, told Outlook.

Stressing the change in the pattern of exams Maheshwari added, "The exams should be postponed for now and NAT should come up with multiple chance exams on the lines of SAT (scholastic assessment test) in which there are multiple sittings for a student to appear for a test at his convenience. Also, there shouldn't be any hurry as there will be delayed counselling and no colleges at the moment. So, delaying an exam should not be an issue."

In its statement on Tuesday, the NTA said it has ensured that more than 99 per cent of the candidates get their first choice of city with regard to exem centres. The number of examination centres has also been increased to 660 from 570 for JEE and 3,843 from 2,546 for NEET, it added. For the year 2020-21, as many as 8.58 lakh candidates have registered for JEE (Main) and 15.97 lakh for NEET (UG).