‘It’s Clear Who They Were’: A JNU Teacher’s Account Of What Happened Inside Campus

"A part of the same group had gathered outside the university gate and were shouting their usual slogans: kill the leftists, kill the anti-nationals, desh ke gaddaron ko, goli maaro saalon ko. The mob outside that was doing it was joined by ABVP students from inside the campus also. So who they were is clear." 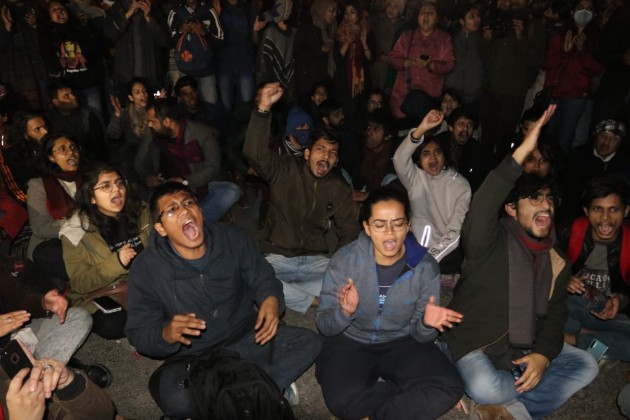 It all started on Saturday. A bunch of ABVP students suddenly started beating other students in the campus. And it happened again Sunday, first at the Admin Block, then the hostels, and then the goons ran amok in the campus.

In the evening on Sunday, we were having a public meeting for peace when they came and started assaulting the teachers and students. They even pelted stones. The miscreants then went around doing more of it in the hostels. And it just went on. There were people from outside too, and it was certainly an organised attack. Some four or five teachers are hurt, of which two are hurt severely. The number of injured students could well be over a hundred.

It was clearly a gang mobilized by the RSS, the BJP and the ABVP. A part of the same group had gathered outside the university gate and were shouting their usual slogans: kill the leftists, kill the anti-nationals, desh ke gaddaron ko, goli maaro saalon ko. The mob outside that was doing it was joined by ABVP students from inside the campus also. So who they were is clear.

Police has only been a mute spectator throughout. The only thing they have done is that they did not allow the mob to come inside. Students are telling me police was present in the hostels while they were being beaten up by the masked mobsters. They were just standing there, watching, not intervening, not stopping. People were beaten up brutally. Somebody was thrown from the first floor.

The university administration had tried everything to break the strike but failed. When nothing else worked, they brought in their goons. This VC has been unable to run the university, and is now resorting to such cowardly acts.

And the violence in JNU can’t be looked at in isolation. The incidents of violence in Jamia, AMU, and now JNU, make it crystal clear that the government is trying to crush the voices of reason arising out of universities. Universities are the places where people study, discuss, debate, and are naturally going to ask questions. That’s something this regime doesn’t like and that is why the universities have become their prime target.

(Vikas Rawal is a professor at Centre for Economic Studies and Planning, Jawaharlal Nehru University)