'It Was Necessary To Boost Sagging Morale Of Police': Former UP DGP On Vikas Dubey's Killing

Former Uttar Pradesh DGP, Arvind Kumar Jain, in an exclusive interview tells Outlook why the elimination of gangster Vikas Dubey, responsible for killing eight policemen in Kanpur, was necessary to boost the morale of the police force. 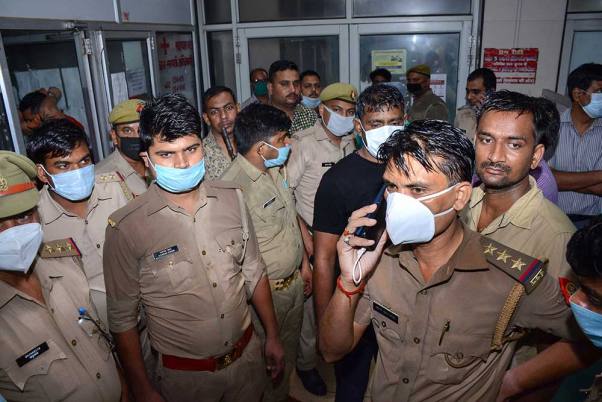 UP Police personnel at the Hallet Hospital where the body of gangster Vikas Dubey was brought for post-mortem in Kanpur.
PTI Photo
Jeevan Prakash Sharma July 11, 2020 00:00 IST 'It Was Necessary To Boost Sagging Morale Of Police': Former UP DGP On Vikas Dubey's Killing

Former Director General of Police (DGP) of Uttar Pradesh, Arvind Kumar Jain, who himself oversaw the encounter of notorious dacoit Shivkumar Kurmi alias Dadua at Chitrakoot in 2006, backs the UP Police's claim that gangster Vikas Dubey’s encounter was genuine. In an interview with Outlook’s Jeevan Prakash Sharma, the 1979-batch IPS officer says that Vikas Dubey was killed when he tried to flee and that it was necessary to boost the morale of the police and public. Excerpts:

Q: Do you think a judicial enquiry is required to look into the allegations that Vikas Dubey’s encounter was fake?

A magisterial enquiry has already been ordered and if there is a need for judicial enquiry, it can also be ordered.

Q: But when the UP Police and the state government are so certain that the encounter was genuine, what purpose will any enquiry serve?

No, a magisterial enquiry is compulsory. Whenever a death takes place in police custody, a magistrate conducts an official enquiry into the cause of death. A team of doctors will conduct a post-mortem report -- all this is videographed. There are guidelines of the National Human Rights Commission (NHRC) which need to be followed. The government has to follow all these guidelines. There is no other option.

Q: Are you 100% convinced that it was a genuine encounter?

How can anyone say if I am 100 per cent convinced? But yes, I have looked into it, I have talked to people and it seems that an accident had taken place which led to the encounter.

Q: Why do you think fingers are being raised on the genuineness of the encounter?

I think one person was shot dead almost in a similar fashion earlier. That is why fingers are being raised on this encounter. You have to realise one thing: eight policemen were butchered by Vikas Dubey. He was a dreaded gangster and a terrorist. You know his mindset. Anything was possible. He could have snatched the weapon also. He could have shot fires at policemen. He could have run away. It was the duty of the police that if they had taken him for a police remand from Ujjain court, he should have been produced in a court in Kanpur. The Ujjain court had handed over his custody to the UP Police. The police couldn’t have said that he ran away.

Also Read : Whose Police Is It Anyway?

Q: So what about the widespread speculation that Vikas Dubey was killed in a fake encounter?

Some people always raise questions when there are encounters in Uttar Pradesh. I was Inspector General (STF) when we had killed Dadua at Chitrakoot. People raised questions on why he was killed. Was there any possibility of surrender? Why didn’t we catch hold of him? Hamari zindagi faltu hai kya? (Are our lives worthless?). Another notorious dacoit Thokia, had killed our six commandos. We gunned him down also. People keep questioning these encounters in UP. I was in service for 37 years and I retired 5 years ago. If an encounter doesn’t take place, fingers are raised at us. If an arrest doesn’t take place, fingers are raised at us. If a criminal surrenders, then also people ask why did he surrender and that why wasn’t he arrested.

Q: But some people had predicted on social media that Vikas Dubey would be eliminated. Your take?

People keep on suggesting things. They keep on imagining. It is the track record of UP Police that it doesn’t spare criminals.

Q: There are reports that the vehicle in which Vikas Dubey was being brought from MP was not the one that met with an accident. Did you look into those aspects also?

No, I was very busy with the interviews and discussions on television. I couldn’t go deep into all that. But I did hear that the car was changed, clothes were changed etc. There are so many things. Now since an enquiry is underway, everything will come out.

Q: Where do you see politicians’ role in the rise of such criminals?

Politics is very dirty. All the parties are responsible for harbouring such criminals.

Q: How do you respond to reports of informers thriving within the UP Police who help these criminals?

There have been moles in the police department also, like what happened in this (Kanpur ambush) case. I haven’t heard of moles on such a large scale in any other police force. Station Officer and so many constables were involved. A circle officer (CO) tried to put Vikas Dubey behind bars and he was going there to arrest him, the station officer (chowki in-charge) alerted the mafia and, instead of running away, he took up a position on top of the roof and started firing at police with his associate. I have never heard of such an incident. It is very demoralising for the police.

You see, at times people also get demoralised, they also get very disturbed that if a criminal has killed eight policemen, then he can do anything with them too. I completely agree with what the police have done. It was necessary to boost the sagging morale of the UP Police and the public. A lesson to all the gangsters and mafias of UP that ‘If you dare to raise your hands on police, if you dare to misbehave, dare to kill the policeman, you will suffer the same.’