According to the government, the shots will be offered first to an estimated one crore healthcare workers and around two crore frontline workers. 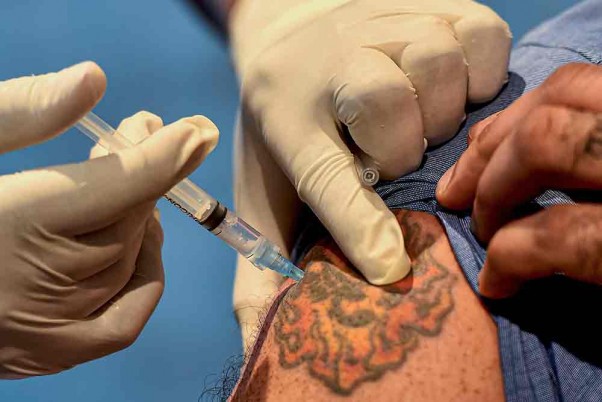 A total of 2,24,301 beneficiaries have been inoculated with Covid-19 vaccine so far. Out of these 447 cases of adverse effects following immunisation (AEFI) were reported, the Union Health Ministry said on day two of the nationwide vaccination drive on Sunday.

During a press briefing, the ministry's Additional Secretary Manohar Agnani informed out of the 447 adverse events following immunisation, only three were hospitalised.

He said -"Today being Sunday, only six states conducted vaccination drive and in 553 sessions a total of 17,072 beneficiaries were vaccinated."

Agnani said a total of 2,24,301 beneficiaries have been vaccinated till January 17 as per provisional reports, adding that 2,07,229 of them received the jabs on day one of the drive.

The number of people vaccinated in the country on day one of the drive is the highest in the world. "It is higher than (the numbers in) the US, UK and France on day one," he said.

"A total of 447 AEFI have been reported on January 16 and 17, out of which only three required hospitalisation. Most of the AEFI reported so far are minor like fever, headache, nausea," he said.

Agnani said that of the three people hospitalised post-vaccination, two have been discharged from the Northern Railway Hospital and AIIMS in Delhi and one is under observation in AIIMS Rishikesh and is doing fine.

Agnani said an adverse event following immunisation (AEFI) is an unexpected medical occurrence which follows immunisation and it may or may not be related to the vaccine or vaccination process.

Noting that only a few AEFI cases may require hospitalisation which are classified under serious AEFI, Agnani said protocols are in place for reporting, immediate case management at vaccination session site, transportation and hospitalisation and further care of such cases.

"Protocols are also in place for systematic investigation and causality assessment of serious AEFI (cases)," he said.

Agnani said a meeting was held with all states and union territories on Sunday to review the progress of the drive, identify bottlenecks and plan corrective actions.

Agnani said states and UTs were advised to plan Covid-19 vaccination sessions four days in a week to minimise disruption of routine health services and some states have already publicised their weekly vaccination days.

It will be carried out three days a week in Andaman and Nicobar Islands, Nagaland and Odisha, and two days a week in Goa, Uttar Pradesh and Himachal Pradesh.

Prime Minister Narendra Modi rolled out the world's largest inoculation drive against Covid-19 on Saturday and said the two vaccines being deployed will ensure a "decisive victory" for India against the pandemic.

India has approved two vaccines -- Covaxin developed by Bharat Biotech and Covishield from the Oxford/AstraZeneca stable being manufactured by the Serum Institute of India -- for emergency use in the country.

According to the government, the shots will be offered first to an estimated one crore healthcare workers and around two crore frontline workers, and then to persons above 50 years of age, followed by persons younger than 50 years of age with associated comorbidities.