The headline reads 'India's Divider in Chief' and carries a caricature of the Prime Minister Narendra Modi. 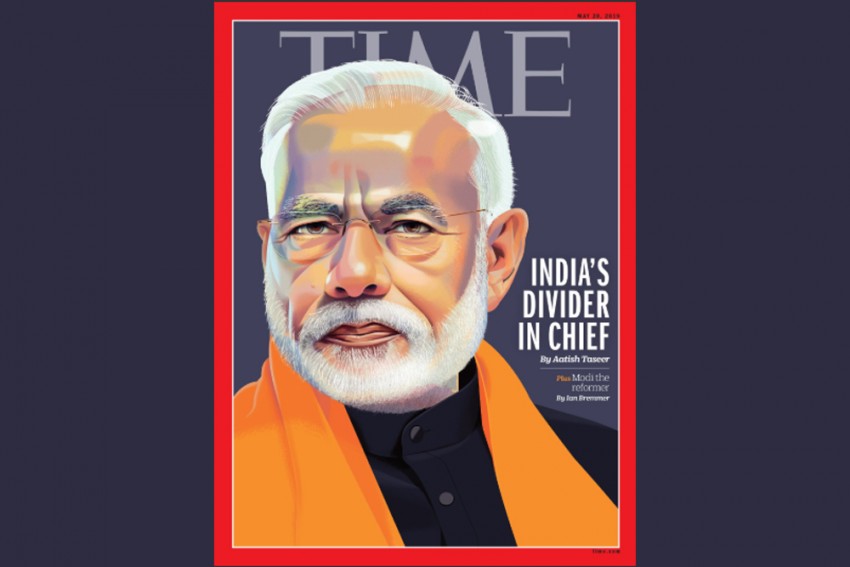 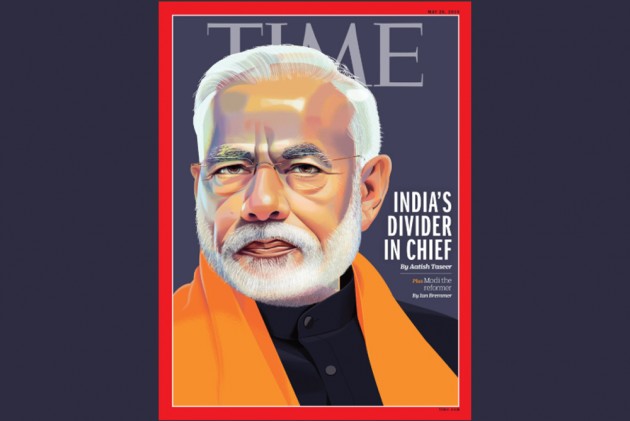 The TIME magazine has featured Prime Minister Narendra Modi on the cover of its international edition with a controversial headline and a secondary one that reads "Modi the Reformer" as the country enters the final phase of the mammoth general election.

The American magazine's May 20, 2019 international editions - the Europe, Middle East and Africa, Asia and South Pacific - feature the Modi cover story with the main headline "India's Divider in Chief" while the US edition has a cover story on Democrat Elizabeth Warren who is running for the White House in 2020.

It also said the opposition Congress party has little to offer other than the dynastic principle.

The article "Modi the Reformer" is authored by Ian Bremmer, president and founder of Eurasia Group, a global political risk research and consulting firm.

The cover depicts a portrait of 68-year-old Modi.

The articles inside the magazine have the titles "Can the World's Largest Democracy Endure Another Five Years of a Modi Government?", written by Taseer and "Modi Is India's Best Hope for Economic Reform", by Bremmer.

Taseer's article notes that "If in 2014 he (Modi) was able to exploit differences in order to create a climate of hope, in 2019 he is asking people to stave off their desperation by living for their differences alone.

"Then he was a messiah, ushering in a future too bright to behold, one part Hindu renaissance, one part South Korea's economic programme. Now he is merely a politician who has failed to deliver, seeking re-election. Whatever else might be said about the election, hope is off the menu," he says.

In 2014, Modi converted cultural anger into economic promise. He spoke of jobs and development. Taking a swipe at the socialist state, he famously said, 'Government has no business being in business'. That election, though it is hard to believe now, was an election of hope, the article says.

"Not only has Modi's economic miracle failed to materialize, he has also helped create an atmosphere of poisonous religious nationalism in India," Taseer writes.

Far from his promise of development for all, he has achieved a state in which Indians are increasingly obsessed with their differences, according to the article.

On Congress -- India's oldest party -- he said it has no more political imagination than to send Priyanka Gandhi - Rahul Gandhi's sister - to join her brother's side. It would be equivalent to America's Democratic Party fielding Hillary Clinton again in 2020, with the added enticement of her daughter Chelsea as Vice President.

"Modi is lucky to be blessed with so weak an opposition - a ragtag coalition of parties, led by the Congress, with no agenda other than to defeat him. Even so, doubts assail him, for he must know he has not delivered on the promise of 2014. It is why he has resorted to looking for enemies within," he wrote.

On the other hand, Bremmer's article notes that while Modi's economic record is mixed, "India still needs change, and Modi remains the person most likely to deliver. He has improved relations with China, the US and Japan, but it's his domestic development agenda that has done the most to improve the lives and prospects of hundreds of millions of people".

Outlining the achievements of the Modi-led government, Bremmer talks about the Goods and Services Tax enacted in 2017, the "unprecedented amounts" of money directed towards the country's new infrastructure, expansion of the Aadhaar biometric identification system that began under the previous Congress–led government.

"Modi has the instinct to dominate and the thin skin of other strongmen, but he also has a genuine track record in providing the kind of reform that developing India urgently needs," Bremmer writes.

Modi also benefits from a lack of a credible alternative. The opposition Congress party's election platform centers on a programme that would provide direct cash payments to 50 million poor families. But a promise is not a plan, the BJP controls enough states to block a Congress government's projects and Modi has already delivered for many people, according to the article.