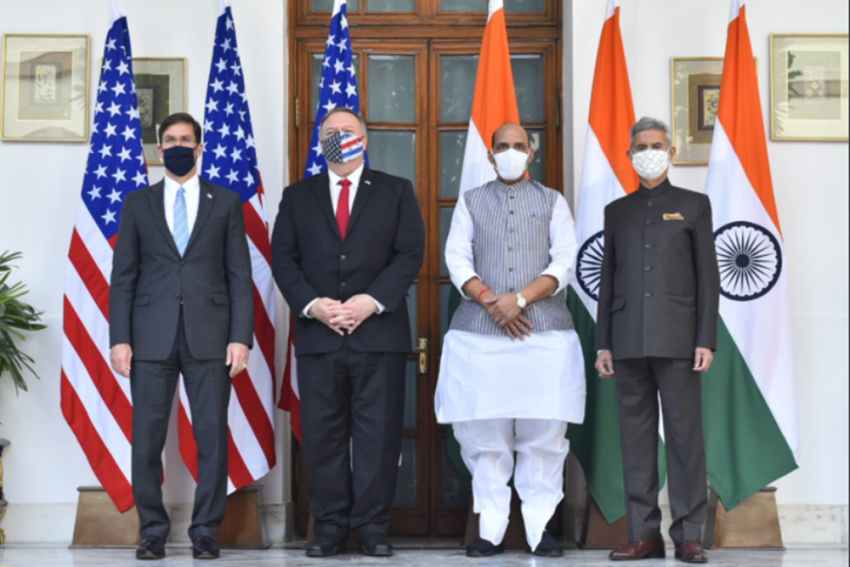 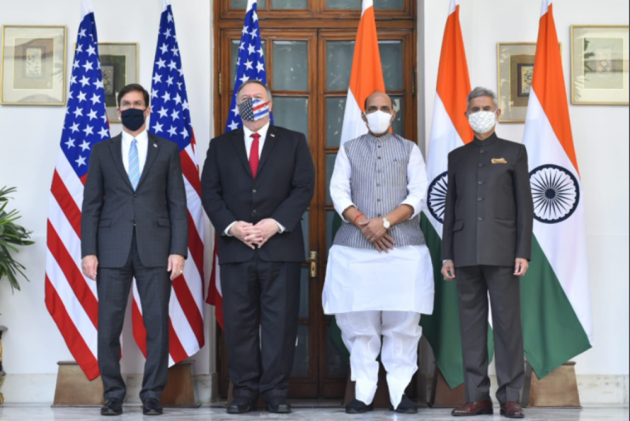 India and the US signed the landmark defence pact, BECA, that will allow sharing of high-end military technology, geospatial maps and classified satellite data between their militaries as the two countries held a high-level dialogue on Tuesday, and vowed to ramp up their security ties and boost strategic cooperation in the Indo-Pacific amidst China's growing economic and military clout in the region.

External affairs minister S. Jaishankar and defence minister Rajnath Singh held the third edition of the 2+2 talks with US Secretary of State Mike Pompeo and Defence Secretary Mark T Esper. Both sides were assisted by their top military and security officials.

The high-level interaction assumes significance as it comes at a time China is attempting to expand its economic and military clout in the Info-Pacific region, and is also engaged in a tense standoff with India in eastern Ladakh. During the talks, the US side also assured India that America stands with it as they confront threats to their sovereignty and liberty.

Addressing a joint media event along with Jaishankar, Pompeo and Esper, Rajnath Singh said the two sides held comprehensive discussion on range of key issues, and dubbed the inking of BECA with the US is a “significant move”.

“Our military-to-military cooperation with the US is moving forward very well,” he said, adding that projects for joint development of defence equipment have been identified. “We reaffirmed our commitment to peace and security in Indo-Pacific region” Singh added.

Pompeo, in his remarks, said during the visit they visited the war memorial to honour the soldiers that sacrificed their lives for the world's largest democracy, including the 20 that were killed by China's PLA forces in the Galwan Valley in June. “The US will stand with people of India as they confront threats to their sovereignty and to their liberty," Pompeo said.

Slamming the Chinese Communist Party (CCP), Pompeo said the US leaders and citizens see with increasing clarity that the "CCP is no friend to democracy, the rule of law and transparency".

The US and India are taking steps to strengthen cooperation against all manners of threats and not just those posed by the CCP, Pompeo added.

Jaishankar said the Indo-US national security convergences have grown and the Indo-Pacific was a focus of the discussion. US Defence secretary Esper noted that the bilateral defence cooperation is continuing to grow.

The inking of the BECA completes finalisation of four key pacts between the two countries which were identified as crucial to significantly expand the strategic ties.

A key pact called General Security of Military Information Agreement (GSOMIA) was signed by the two countries in 2002. The GSOMIA provides for specific measures to ensure security standards for safeguarding critical information shared by the US with India.

In a major move in 2016, the US had designated India a "Major Defence Partner" intending to elevate defence trade and technology sharing to a level commensurate with that of its closest allies and partners.

The two countries inked the Logistics Exchange Memorandum of Agreement (LEMOA) in 2016 that allows their militaries use each other’s bases for repair and replenishment of supplies as well as provide for deeper cooperation.

India and the US signed another pact called COMCASA (Communications Compatibility and Security Agreement) in 2018 that provides for interoperability between the two militaries and provides for sale of high end technology from the US to India.

About BECA, officials said the agreement will give India access to classified geo-spatial data as well as critical information having significant military applications from the US.