Though the situation is not 'adversarial', even a semblance of friendship has disappeared and that is why the Indian government is 'very careful', Former External Affairs Minister Natwar Singh said. 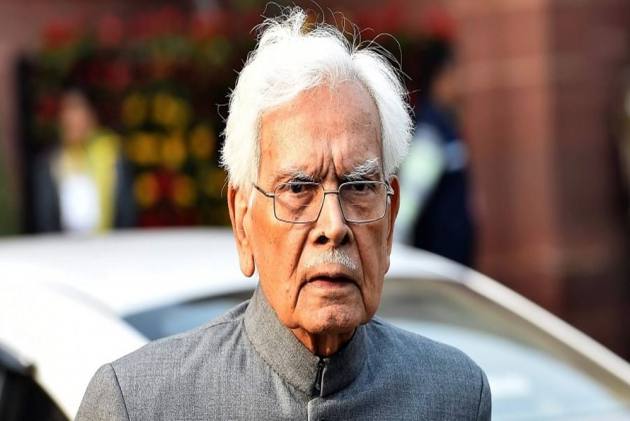 The former External Affairs Minister K Natwar Singh, 92, said that India should have publicly engaged with the Taliban before they took over Afghanistan. He also favoured establishing diplomatic ties if they function as a responsible government going forward in the war-torn country.

He said India was quite close to President Ashraf Ghani "who has run away" but the situation has "altered drastically" now.

Singh, who was the foreign minister in UPA-I and also served as India's Ambassador to Pakistan besides holding other senior diplomatic positions, said India should adopt a "wait and watch" approach for the time being but noted that the Taliban that have taken over seems to be a "better lot" than those that ruled there two decades earlier.

I’ve Heard Taliban Militants Chopped Off Hands Of 15 People For A Petty Crime: A 16-Year-Old In Kabul

Though the situation is not "adversarial", even a semblance of friendship has disappeared and that is why the Indian government is "very careful", he said.

The Americans have to take a lot of blame because US President Joe Biden, by pulling out his troops, made it easy for the Taliban to walk in, Singh said.

His remarks follow Taliban insurgents sweeping Kabul after the US-backed Afghan government collapsed and President Ghani fled the country on Sunday, bringing an unprecedented end to efforts made by the US and its allies to transform the war-ravaged nation in the last two decades.

Asked if India should have engaged with the Taliban earlier, Singh answered in affirmative and cited Americans' example of holding talks with the group.

"If I was the foreign minister, I would have had contact with them. I would have gone out of my way and told my intelligence agency to make a contact quietly," said the former Congress veteran, who was the external affairs minister from May 2004–December 2005. A few years later, he had quit the Congress.

Citing the example of Americans having contact with Cuba at Guantanamo, he said India should have engaged with the Taliban as "we can't leave the field open to Pakistan and China".

Chinese Foreign Minister Wang Yi had met Mullah Baradar at Tianjin last month and sought to prevail on him to build a "positive image and establish a broad and inclusive political structure that suits Afghanistan's national realities".

Singh said the Taliban, not the present lot but the one that ruled earlier, openly had said they were anti-Hindu. They are still much closer to Pakistan, but that doesn't mean that Islamabad can dictate terms to them, he added.

"Pakistan financed them, then Americans armed them. It is a very complex situation but at the moment we are not a player," he said.

Singh said India spent USD 3 billion on Afghanistan in the last 10-12 years, building roads, hospitals, schools and whatever little industries they have.

"All that is gone (with the Taliban coming). Violence has already started, they beat up a few people. But they are a better lot than those 30 years ago, they are more educated, they are more aware of the world. They have also become conscious that the world opinion matters," Singh said.

He noted that the present lot of Taliban will be more careful but India was not a priority for them.

Asked if India should recognise them if they stick to their words that they will not allow Afghan soil for activities inimical to any other country, Singh said, "I think we should, absolutely. We can't choose a government of another country and if they are functioning as a responsible and a reasonable government, there is no reason (not to recognise) because we have a stake in Afghanistan."

The former foreign minister also asserted that the priority should be to evacuate Indians who want to come back.

On the Modi government's Afghanistan policy, particularly after 2019, Singh said, "I say this with due respect to the present government, we have not taken as much interest as we should have. If I were a foreign minister, I would have sent for Hamid Ansari, a former Indian envoy to Afghanistan, to consult him on this crisis."

"I would have said, let us wait and keep well informed. There are other friendly countries who are there, they can let us know," he said.

Talking about India's Afghan policy over the years after independence, Singh said India was a major player in Afghanistan 30-40 years ago but that changed in the later years.

"Jawaharlal ji, Indira Ji and Rajiv (Gandhi) were very interested in relations with Afghanistan and they had personal relations with the heads of state and government. When V P Singh and Narasimha.

Rao took over, they did not know much. Things have now altered... We have consul general's office in some places but we don't carry enough weight with the Afghan government for the last 20-30 years," he said.

Asked about the Modi government's performance on the foreign policy front, Singh said they have not made any bloomer.

"I think (S) Jaishankar has been quite active, meeting people, and is a very balanced individual. But I think the impression that goes around is that the prime minister's secretariat is also active in foreign policy. Don't know how true this is but this is the general impression," he said, adding that he was not commenting whether it was a good or bad thing.