Shortly after the attack was reported, several political leaders condemned the attack and expressed their shock and anguish. 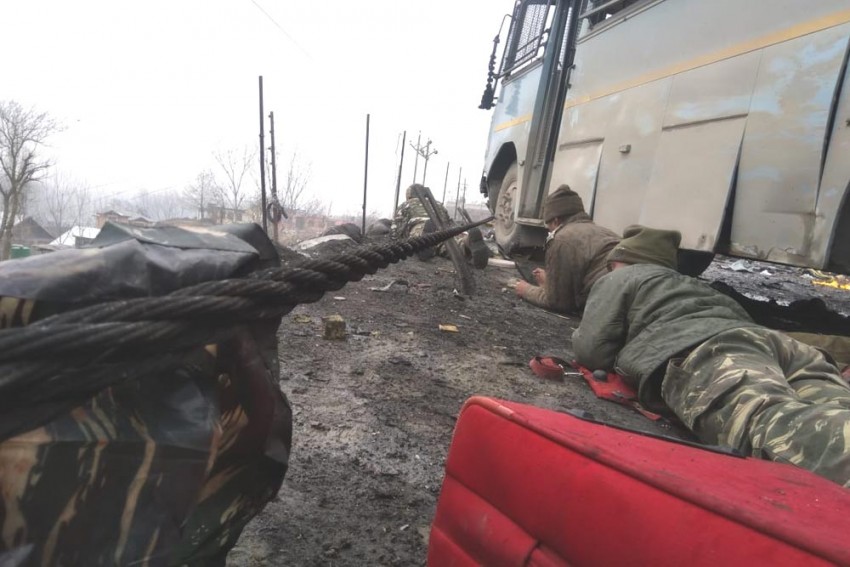 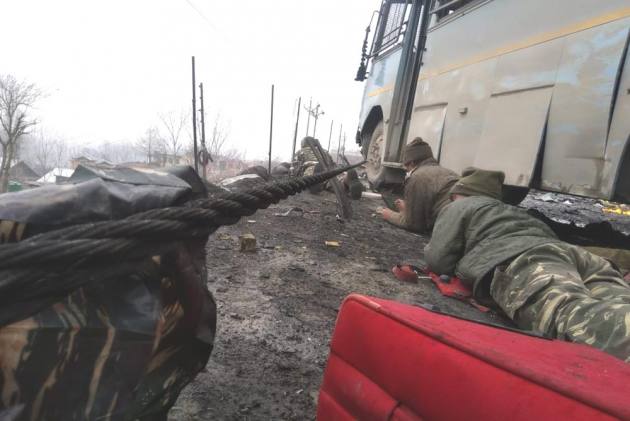 Political leaders were unanimous in their condemnation of the Pulwama terror attack in which at least 40 CRPF personnel were killed in a Jaish-e-Mohammed fidayeen attack.  While Union Finance Minister Arun Jaitley said the terrorists would be given an "unforgettable lesson" for the heinous attack,  Congress leader Priyanka Gandhi Vadra said the government should take concrete steps to ensure such incidents don't happen again.

President Ram Nath Kovind tweeted his condemnation of the terror attack, wished early recovery to the injured and said the entire nation "stands united in the fight against the forces of terror and evil".

Strongly condemn the terrorist attack in Pulwama, J&K. Thoughts and prayers with the families of martyrs and wishing an early recovery to those injured. The entire nation stands united in the fight against the forces of terror and evil #PresidentKovind

Expressing shock over the attack, Naidu took to Twitter and wrote: "Shocked by the dastardly terrorist attack in which CRPF personnel were martyred. My heartfelt condolences to bereaved families and prayers for speedy recovery of the injured.

BJP chief Amit Shah, expressing his pain at the "act of cowardice", said the forces will "remain firm against such acts of terror and defeat them".

Pained beyond words by the terror attack on our soldiers in Pulwama (J&K). It is an act of cowardice. My deepest condolences are with the families of our soldiers who have lost their lives. Our forces will remain firm against such acts of terror and defeat them.

Attack on CRPF in #Pulwama, J&K is a cowardice & condemnable act of terrorists. Nation salutes martyred soldiers and we all stand united with families of martyrs. We pray for speedy recovery of the injured. Terrorists will be given unforgettable lesson for their heinous act.

Deeply saddened by news of the IED blast in #Pulwama, Jammu & Kashmir in which our brave CRPF Jawans have been martyred. My thoughts are with the bereaved families and prayers with our injured Jawans to recover soon.

Congress president Rahul Gandhi in a tweet said that he was "deeply disturbed by the cowardly attack" on the CRPF convoy and offered condolences to the deceased.

I’m deeply disturbed by the cowardly attack on a #CRPF convoy in J&K in which 10 of our brave men have been martyred and many others wounded. My condolences to the families of our martyrs. I pray for the speedy recovery of the injured.

Congress general secretary Priyanka Gandhi Vadra expressed her deepest condolences to the families of the security personnel killed in a terror attack in Pulwama, Jammu and Kashmir.

"I can very well understand the pain and grief of losing a loved one in the family," Gandhi said in a statement.

Not only the Congress party, but the entire country is standing shoulder to shoulder with the families of the brave soldiers, she said.

"But, we must also reflect and be concerned about the high number of casualties in Kashmir. We demand that this government take concrete steps to ensure such terror attacks don't happen in the future," Gandhi said.

West Bengal Chief Minister Mamata Banerjee mourned the death of CRPF jawans and extended condolences and solidarity to their families.

Saddened that 13 CRPF jawans became martyrs today in Pulwama. We salute our brave jawans and extend our solidarity and condolences to their families. Our prayers for those injured. We wish them a speedy recovery

Jammu and Kashmir Governor Satya Pal Malik condemned the attack and conveyed his grief and sincere sympathy to the families of the brave soldiers who had lost their lives in the attack and prayed for early recovery of all those injured.

The Governor expressed serious concern about the terrorist attack on security forces and observed that the “forces responsible for insurgency in J&K are desperate and frustrated and they just want to prove their presence.” He said visibly it seems the attack was "guided from across the border" as Pakistan-based Jaish-e-Mohammad has claimed  responsibility.

He said that such actions will not deter the resolve of our Security Forces and people, and we will finish these inimical forces to the last.

Former Cheif Minister of J&K and National Conference Vice President Omar Abdullah tweeted, condemning the attack in the "strongest possible terms" and offered condolences to the families of the bereaved.

Terrible news coming from the valley. A number of CRPF soldiers are reported to have been killed & injured in an IED blast. I condemn this attack in the strongest possible terms. My prayers for the injured & condolences to the families of the bereaved. #Kashmir

In another tweet, the former CM said that the "fidaeen attack is reminiscent of the dark days" of pre-2004-05 militancy period.

Jaish has claimed the blast as a suicide (fidaeen) attack reminiscent of the dark days of militancy pre 2004-05. #Kashmir

Former Jammu and Kashmir Chief Minister and PDP chief Mehbooba Mufti in a tweet said "no words are enough to condemn the gruesome terror attack". "

Disturbing news coming in from #awantipura . Twelve of our security personnel have been martyred and several have been injured. No words are enough to condemn the gruesome terror attack. How many more lives will be snuffed out before this madness ends?

"How many more lives will be snuffed out before this madness ends?," asked Mehbooba.

Delhi Chief Minister Arvind Kejriwal in a tweet condemned the attack and said "India must stand united in this moment of grief."

Extremely shocking news coming from Pulwama (J&K). I strongly condemn the terror attack on CRPF convoy in which many casualties are feared. India must stand united in this moment of grief

PM-KISAN: Modi To Give 1st Installment To 1 Crore Beneficiaries On Feb 24