The accident occurred near Banda when the labourers were going from Maharashtra to Uttar Pradesh, police said. 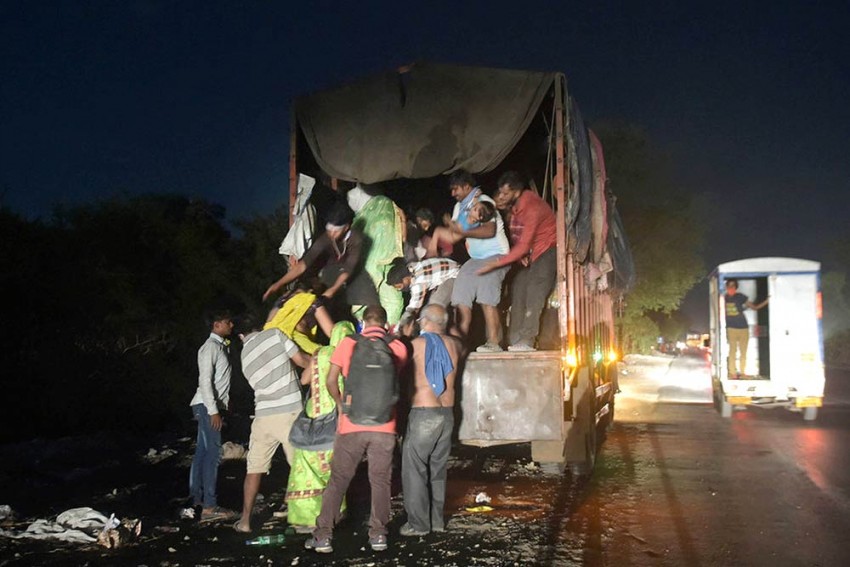 Most of the migrant labourers started walking back home after the lockdown led to a complete suspension of economic activities. Seen here are migrants from northern states taks a lift in cargo vehicle on Mumbai-Nashik highway to reach their native places. (PTI)
Outlook Web Bureau May 16, 2020 00:00 IST In Second Road Mishap Today, 5 Migrant Labourers Killed In Madhya Pradesh 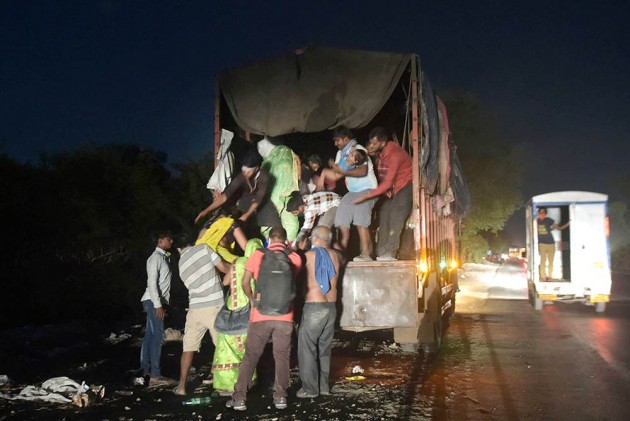 At least five migrant workers were killed in another road accident -- second in the day involving labourers -- when the truck they were travelling in overturned in Madhya Pradesh's Sagar district, police said. The accident occurred near Banda.

According to police, on Saturday morning the cargo truck was going from Sagar to Chhatarpur. The driver lost control of the vehicle near Semra Bridge and it overturned there. The accident took place under the Bakswaha police station area of Chhatarpur district.

Five labourers died on the spot while 18 laborers have been injured in the accident. These labourers were going from Maharashtra to Uttar Pradesh. The injured have been admited to the hospital in Banda, the police said.

Earlier in the day, at least 24 migrant labourers were killed and scores of others were severely injured in a collision between a mini-truck and a trolley in Uttar Pradesh's Auraiya district.

The incident took place on the national highway at Mihauli under Kotwali police circle when the trolley rammed a mini-truck.

Both the trucks were carrying the labourers.

"The accident took place in Mihauli in which 24 people died, and around 15 were injured. A trailer truck carrying around 50 migrant labourers was coming from Rajasthan and it collided with a DCM truck.

The accident took place on Saturday between 3.00 am and 3.30 am," Circle Officer, Auraiya, Surendranath Yadav told PTI.

"The DCM truck was coming from Delhi and heading towards Chhatarpur in Madhya Pradesh. The trailer truck hit the DCM vehicle. Both the vehicles turned upside down after losing control," he said.