The majority of such political events being conducted by the TMC and the BJP are about induction of supporters from other parties to their respective organisations. 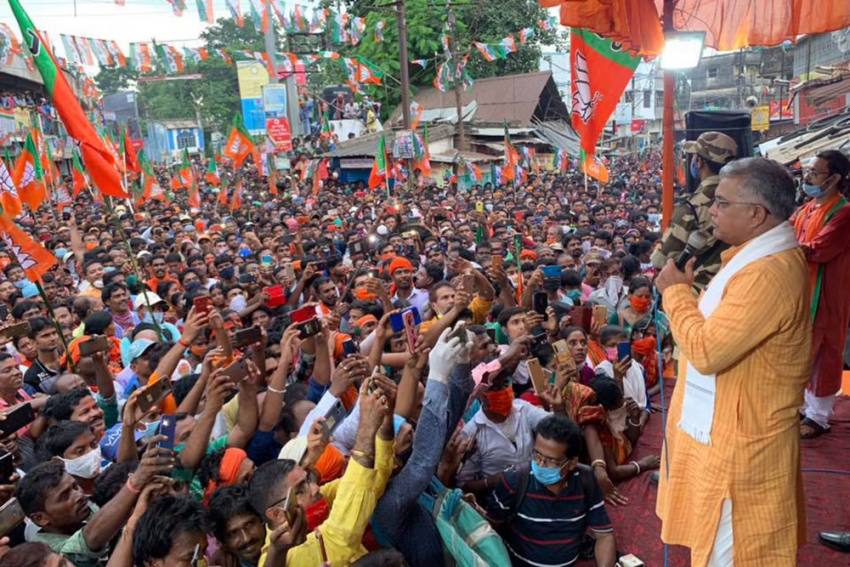 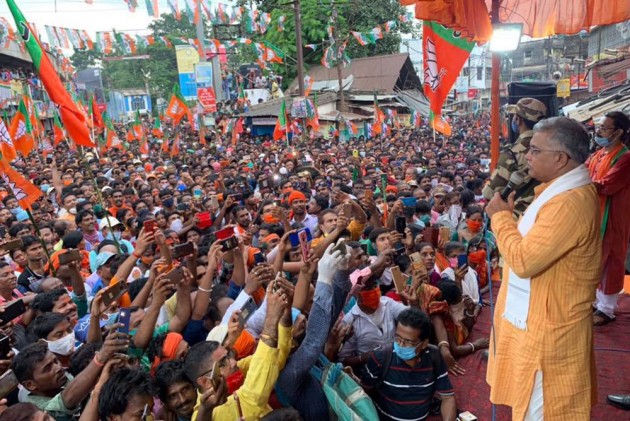 So what if West Bengal is recording 3,000 new cases and 55 deaths every day on an average for the past month, political activities have unfolded in this poll-bound state in full swing, with meetings of the Trinamool Congress (TMC) and Bharatiya Janata Party (BJP) drawing crowds of hundreds of people as a norm. There is zero physical distancing maintained in these events.

On Thursday, Dilip Ghosh told Outlook that the party could do little to prevent such gatherings. “There is huge public enthusiasm for our programmes. We did not start it. The TMC started holding political events and we only followed. What can we do if people who are dying to get freedom from the TMC’s rule throng our venues? It’s beyond our control,” Ghosh said.

Ghosh argued that these gatherings would not have any significant impact on the spread of the disease because Covid-19 was still ‘an urban phenomenon’ in West Bengal, whereas the BJP was conducting its events in the rural belts. He also even said that Covid-19 was no longer a concern. " Corona is gone! Didi is making all the drama and imposing lockdown to prevent the BJP", Ghosh said, as the crowd cheered his announcement with claps and slogans.

The majority of events being conducted by the TMC and the BJP are about induction of supporters from other parties to their respective organisations.

The state’s ruling party, the TMC, appeared a little more concerned about controlling the crowd but their events, too, are drawing hundreds of people, especially in the rural districts. Over the past few days, the TMC’s Birbhum district unit president Anubrata Mandal is addressing party workers in every Assembly segment. These meetings are drawing hundreds of attendees.

Om Prakash Mishra, a TMC spokesperson, blamed BJP for having no concern for the people’s wellbeing.

“I would not say there were no aberrations in our events but we have tried to keep the gathering as low as possible at the induction events. Sometimes, people did not listen to our local leaders. But we are making a conscious effort in ensuring physical distancing. However, the BJP has no regard for any norm whatsoever,” Mishra said.

The rallies that the Left parties took out in rural pockets had some aspects of physical distancing maintained but the protest gatherings they organised witnessed rampant violation.

Sujan Chakraborty, the leader of the Left Front in the state Assembly, blamed the TMC and the BJP for being ‘utmost irresponsible’. He alleged that both the governments at the Centre and the state failed to control the Covid-19 situation and now both the ruling parties were helping the spread of the disease.

“We have been trying to conduct our political activities as responsibly as possible. There may be some cases of violation in the rural districts but the party leadership is always trying to set an example by themselves maintaining the physical distancing norms. In Kolkata, physical distancing was maintained in every event where the leaders took part,” said Chakraborty.
According to the veteran doctor and public health activist Rezaul Karim, the complete violation of physical distancing norms in political programmes puts Bengal at high risk of a spike in the number of cases in the near future.

“The TMC is still trying to keep most of their events indoors, while BJP is relying on outdoor events. As political parties try to expand their space, people are getting exposed to grave danger,” Karim said.

Political analyst Biswanath Chakraborty, a professor of political science at Rabindra Bharati University in Kolkata, said that the leaders were taking desperate measures due to the high stakes in the Assembly elections due in 2021.

“In West Bengal, traditionally, life and death are directly related to everyday party politics. Social and economic life is also controlled by the political parties. The present series of meetings organised by different parties reflect the grip of party politics on daily life. Even in a pandemic situation, leaders of political parties are not in a position to sacrifice the interests because of the impending 2021 elections,” he said.