In Karnataka, 4 Rebel Congress MLAs Are Keeping The Coalition Govt On Edge 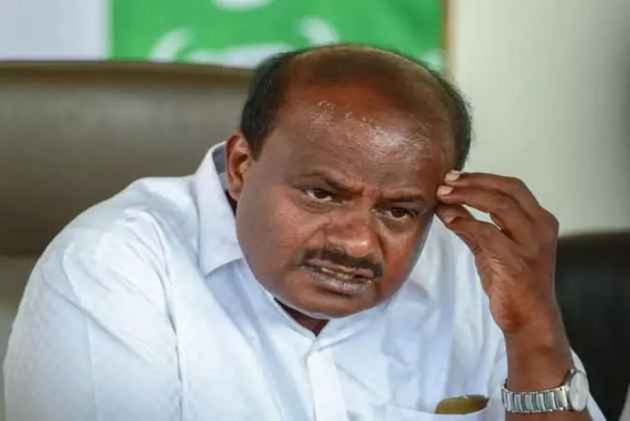 Ahead of the Lok Sbaha elections in April-May, four rebels and a few other disgruntled legislators of the Congress are keeping the H.D. Kumaraswamy-led coalition government in Karnataka on the edge.

Defying the party whip, the Congress MLAs, said to be 10 in number, skipped the joint session of the state legislature on the first day of the 10-day budget session on Wednesday.

As the rebels -- Ramesh Jharkiholi, Mahesh Kumatalli, Umesh Jadhav and B. Nagendra -- continued to remain incommunicado, Congress Legislature Party (CLP) leader Siddaramaiah on Thursday warned them of disqualification under the anti-defection law if they do not attend the CLP meeting on Friday morning.

To tackle disgruntled legislators, the Congress general body reviewed the situation and plans to write to Speaker K.R. Ramesh Kumar to disqualify the MLAs who do not attend the House when the budget is presented. The budget has to be passed after debate by February 15.

With the BJP deciding to press for division at voting on the budget, the presence of all the 79 Congress members has become necessary to ensure its passage.

In the 225-member Assembly, including one nominated from the Anglo-Indian community, the Congress has 80 members, including the Speaker, the JD-S 37, the BJP 104 and remaining are an Independent and one each from the BSP and the KPJP, a regional outfit.

As the combined strength of the ruling allies is 116, including four rebels, the government will be able to pass the budget as 113 is the halfway mark required for a simple majority.

"Even if the four rebels are disqualified, the government will still be able to pass the budget, as the overall strength of the Assembly will come down to 221, with 111 as the halfway mark for a simple majority," a Congress leader claimed.

Two legislators, H. Nagesh of Karnataka Pragnavantha Janatha Party (KPJP) and Independent R. Shankar, who withdrew their support to the coalition government last month, also kept away from the session on Wednesday. The allies are, however, trying to woo Nagesh and Shankar to vote in favour of the budget or abstain to prevent its defeat on the floor of the House.

B.S. Yeddyurappa, BJP state president and its leader in the House, however, claimed that his party would not move a no-confidence motion against the coalition government or prevent Kumaraswamy from presenting the budget

"We will neither move a no-confidence motion nor approach the Governor. The government will collapse on its own, given the bickering among its MLAs. The government is on the brink due to 'revolt' in the Congress and serious differences between the two allies over many issues," said Yeddyurappa.

Though the ruling allies have survived over the last 8 months despite uncertainty and bickering over power-sharing, fear of the 'big brother' (BJP) staging a coup has kept them together, however uneasy their relations may be.

It is for the first time an out-of-power Congress was forced to keep the JD-S alive and relevant in the state politics by extending unconditional support to form a coalition government on May 23 after the three-day BJP government fell on May 19 for want of a simple majority.

As the hung verdict was against then ruling Congress, which won 78 seats initially against 121 in the 2013 Assembly elections, it lost no time in wooing its arch rival (JD-S) to form a post-poll alliance after a bitter electoral battle, though the latter could win only 37 seats.

While the necessity of keeping the BJP at bay forced the allies to hold on, absence of "chemistry" between the two has taken a toll on their "opportunistic" alliance, which is evident from pot-shots between them over many issues from day one.

While JD-S supremo and former Prime Minister H.D. Deve Gowda and Chief Minister Kumaraswamy still consider coming to power again as a providential gift despite having only 37 members, the "big brother" attitude of the Congress is turning to be a millstone around their neck due to its alleged interference in administration, appointments, transfers and allocation of funds to various sectors, a political analyst said.

"Though coming to power with just 37 MLAs has been a dream come true for the JD-S, the Congress dominance in power-sharing in terms of cabinet posts, heads of boards and corporations and portfolios has made Kumaraswamy bear the cross for the survival and continuation of the fledgling coalition government as long as it can," he said.