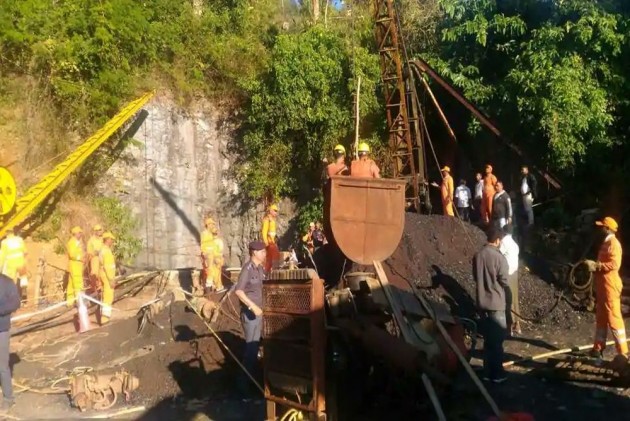 Solibar Rahman stopped working in Meghalaya's illegal coal mines in 2012. The native of this village in western Assam's Chirang district is, however, confident of his skills and is now bracing for one last attempt to rappel down the 380-foot coal mine at Ksan in Meghalaya's East Jaintia Hills district to search for his son, who had not returned from the mine since December 13.

The coal mine got flooded around 8.30 am on December 13, just a few hours after 22 miners went down below to 380 feet to extract more coal. While five miners had a miraculous escape and survived, the rescuers have failed to trace Rahman's 19-year-old-son Monirul Islam and the rest of the miners who got trapped by the sudden deluge.

"I have worked in the coal mines of Meghalaya for 30 years. I know the tricks... how to climb up and down the mines. I want to go there once the water is flushed out. My son is there and I must go look for him," Solibar Rahman said.

On Day 19, Navy Divers Reach Bottom Of Meghalaya Mine, No Trace Of Trapped Miners

A septuagenarian, Rahman is a first generation miner who worked in the different coal mines of Meghalaya between 1983 and 2012. He stopped working as his three sons grew up and started taking the responsibility of the family. Monirul's his elder brother Manik Ali works in a different coal mine.

"I request the Meghalaya government to give me an opportunity to go and look for my son in the mine. After the water is flushed out, I think we can go inside and search for the trapped persons. I have seen many deaths in coal mines in my 30 years of work there. I have taken out bodies of my colleagues from the coal mines," said Rahman.

He accused the government of delaying the rescue operation. "The government should have used high-powered pumps from day one to rescue the trapped miners. It's not possible to dry out a mine by using normal pumps," Rahman pointed out.

"The government can do anything they wish. I am an illiterate person but I knew from day one that pumps with more than 120 HP will be required to pump out the water. How come the government is now aware of that," Rahman asked.

Four youths of Bhangnamari village were working in the ill-fated coal mine when the tragedy struck on December 13. While one of them, Saheb Ali, could survive by holding on to an electric wire hanging from the top, there is no news so far about the 15 others.

Those who work in Meghalaya's illegal coal mines are aware of the risks involved. However, extreme poverty and lack of employment opportunities leave them limited options, forcing them to take up mining and risking their lives.

The National Green Tribunal had, in 2014, banned "Rat Hole" mining in Meghalaya due to the environmental impact on some rivers downstream. However, this continued unabated despite a massive hue and cry by several NGOs and civil society organisations, which leads one to believe there is a nexus between politicians and the "coal mafia", which wants the illegal trade to continue.

In fact, anti-corruption activist Agnes Kharshiing and two of her colleagues were attacked by suspected coal mafia members in November 2018 when they were returning from the East Jaintia Hills. Kharshiing, who heads the Civil Society Womens' Organisation (CSWO), had lodged a complaint against illegal mining and transportation of coal before she was attacked.

Reacting to the attack, former Meghalaya Meghalaya Home Minister R.G Lyngdoh had told media that the assault points to the seriousness of illegal coal mining in the Jaintia Hills.

Prior to the attack on Kharshiing, students' leader Poipynhun Majawa, based in the East Jaintia Hills district, was found murdered under mysterious circumstances in March 2018.