With Boroma's demise, politicians seem to have lost a place to seek the sect’s political patronage. Her heirs are today politically divided. 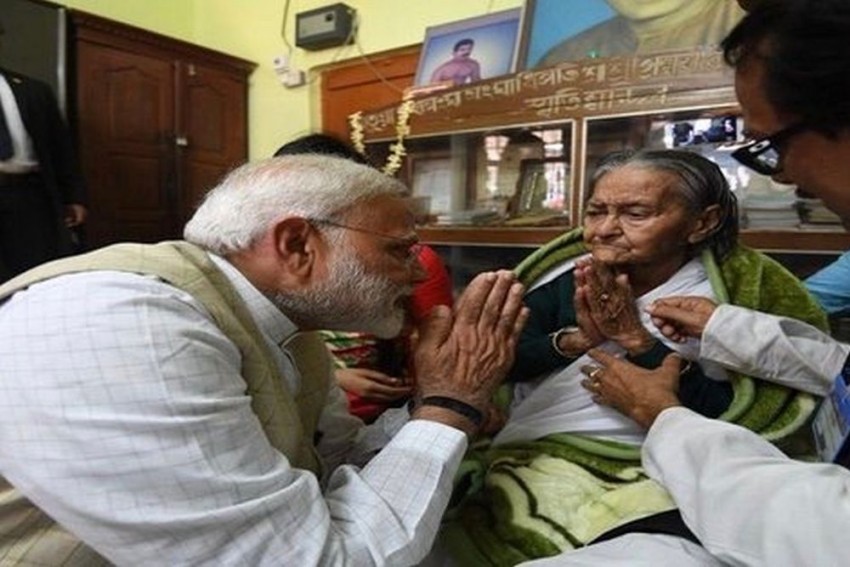 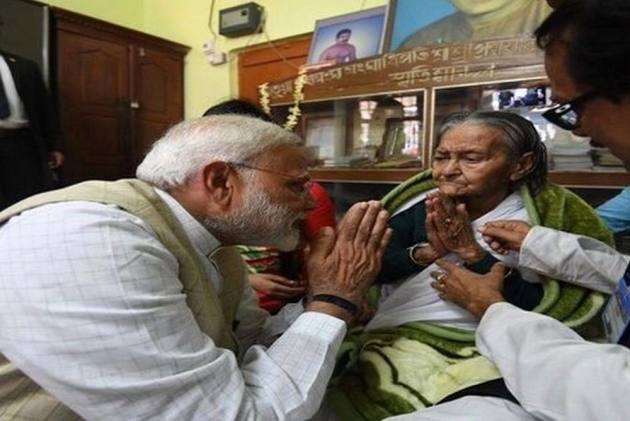 Even before the funeral pyre of Matua matriarch Binapani Devi, fondly known as Boroma or elder mother, has been lit, the Thakurbari — Matua Mahasangha headquarters in North 24 Parganas’ Bongaon, about 30 km from the India-Bangladesh border--has been dragged into a political battle between her heirs with divided political loyalties.

The Matua community — a politically influential close-knit Hindu sect consisting almost exclusively of Namashudra Dalit immigrants from erstwhile East Pakistan (now Bangladesh) after the Partition and Bangladesh after 1971 -- is divided politically, with every party from the Left, and the ruling Trinamool Congress, wooing the 7 million-strong community.

Not one to ignore the huge political influence the sect wields among its people, the BJP too joined the bandwagon with no lesser than Prime Minister Narendra Modi seeking the Matua matriarch’s blessings before addressing a rally at Thakurnagar on February 2.

The Matuas —  comprising followers of the sect’s founders Harichand Thakur and Guruchand Thakur — settled in districts along the India-Bangladesh border, a large number of them even after 1971.

But what makes the sect so attractive to political parties is their number.

The Matua community has influence on the outcome of votes in more than 70 assembly seats in the state, comprising seven Lok Sabha constituencies spread across three bordering districts of Nadia, North 24 Parganas and South 24 Parganas.

The community is the deciding factor in five assembly seats.

Boroma understood the political implications and in turn pledged support to politicians for the sect’s welfare.

But with her demise, politicians seem to have lost a place to seek the sect’s political patronage. Her heirs are today politically divided.

Over the years, Binapani Devi’s family members went on to become a minister and Member of Parliament.

Matua disciples of Boroma said after her health started failing and before her death on March 5, the centenarian was disgusted with the political class trying to extract political mileage and trying to portray themselves as being “one with the community”.

Besides trying to keep the sect united, Boroma played the perfect matriarch by blessing all those who came to seek her it, but the politically astute sect leader did not ask Matuas to vote for a particular party.

Though during her lifetime, the Matua matriarch -- who was born in 1919 in Barishal, now in Bangladesh -- had been the unifying factor for the sect, but after the demise her household appears to be faction-ridden.

One of Boroma’s daughters-in-law, Mamata Thakur, is the Trinamool MP from Bongaon, while one of her sons, Manjul Krishna Thakur has been a minister in Mamata Banerjee’s cabinet.

However, Munjul Krishna Thakur’s sons are now firmly with the BJP, the youngest, Santanu Thakur, was one of the main organizers of Modi’s February 2 rally.

What make the situation interesting is that both the Mamata Thakur and Santanu Thakur factions know that they will be able to wield political clout and be attractive to political powers only if they can control the Matua Mahasangha, over which Binapai Devi held sway.

Modi’s seeking the Matua matriarch’s blessings was seen as striking a chord with the close-knit sect, which could influence results in the 2019  Lok Sabha elections.

The Matuas came to political limelight in the state 13 years back in 2006, when the community stood en-bloc by the Trinamool candidate who defeated the sitting CPI (M) candidate, and since then the Thakurbari became a preferred destination for the Trinamool, the Left and now the BJP.

The Matua Mahasangha, a structured apex body of the close-knit sect, has been demanding citizenship for every member as most of them do not have citizenship. The sect’s key demands have been post-Partition citizenship rights for every community member.

The Scheduled Caste sect makes up 4% of Bengal’s population. Some who came from erstwhile East Pakistan after the Partition, and a sizeable chunk after Bangladesh was formed, find the cut-off date of March 25, 1971, difficult to secure citizenship.

Banerjee, whose party opposes the bill, says that it discriminates between immigrants on religious grounds. The TMC in January had stolen a march of sorts over the BJP by giving land rights to people living in 94 refugee colonies in the state irrespective of their faith.

The Matua Mahasangha is one that every party in West Bengal would want on its side. Its key demands have been post-Partition citizenship rights for every community member.

The community makes up more than a third of all Hindu immigrants from Bangladesh.

In the 2011 Bengal assembly polls, Mamata Banerjee courted them by endorsing the Matua Mahasangha, one of the important factors that led to the end of the Left’s 34-year reign in the state.

Mamata Banerjee, who wooed the group away from the Left since the 2008 panchayat polls when the Trinamool tasted its first electoral success in the state, has continued to woo them even today.

Now with Boroma no more, it will depend on how her heirs are able to take the Thakurbari out of the politician’s clutches.

But what they lack is the Matua matriarch’s acceptability to rally Matuas for a particular party. But a section of the sect feels that such an effort may boomerang in the 2019 Lok Sabha election.

They, however, feel that Boroma's heirs should take advantage of the situation by dumping the politicians for good and go back to the sect’s founder fathers’ motto of social service.

The sect’s founder fathers-- Harichand Thakur and Guruchand Thakur--gave the migrants from Orkhandi in erstwhile East Pakistan now in Bangladesh, a place and chance to start life afresh and not be political influencers.