Dharamvir Singh runs a garment business in the busy street of Kochi’s convent junction, which is thousands of miles away from his homeland in Punjab. Yet, as the 36- year-old is all set to vote for the Kerala Assembly elections on April 6, the plight of lakhs of protesting farmers at the Delhi borders will be on top of his mind.

He belongs to the third generation of a Sikh family, who moved to Kerala’s coastal city of Kochi in 1965. Singh, who was born and brought up in Kochi, says that he identifies himself as a Kochite. “Kerala is home for me,” he says.

As poll frenzy whips up in the city, the reverberations of the ongoing farmers' protest are felt in the elections here too. The Sikh community is not present in large numbers in the city, still, Kochi can boast of the most number of Punjabis in the state. As March 26 marked four months of farmers' protests against the new farm laws passed by the government, the Sikh community in Kochi feels slighted, say its members.

Amidst the hustle and bustle of campaigning, Singh’s priorities are loud and clear. With the farmers’ struggle and other issues looming large, Singh says he and his family members will vote against the Bharatiya Janata Party (BJP) and its policies. That wasn’t the case in the 2019 Lok Sabha elections and 2015 Assembly polls, when they voted for the BJP for its development plank.

“One of the main reasons for voting against the BJP is the central government’s mishandling of the farmers’ protest and other issues such as rising prices of essentials,” says Singh. 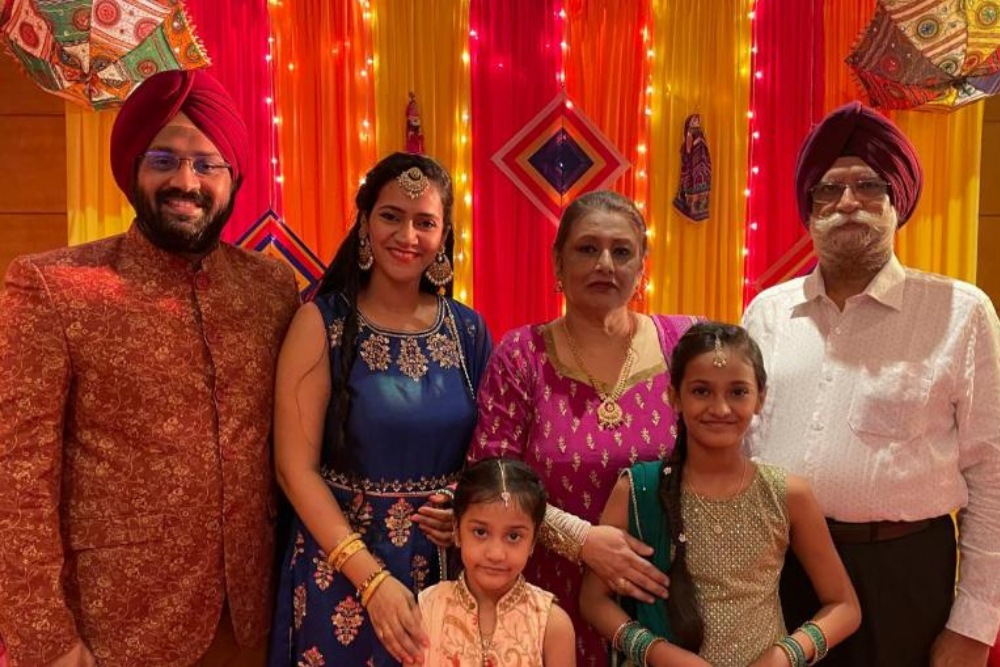 Dharamvir Singh with his family

He is also impressed with the ruling CPM-led Left Democratic Front (LDF) government, which passed a resolution in the Assembly against the new farm laws.

“My family will vote for the Left parties this time. We are happy with the way the government passed the resolution in the Assembly and gave an assurance that the bill won’t be implemented in the state. The Communist parties understand the pain of the labour class and they stood up for the people,” says Singh.

The sentiments are shared by Ruhi, who runs ‘Sardarji Ka Dhaba’, a popular food joint in Kochi’s Banerjee Road. Her husband, Daman Preet Singh and father-in-law Amar Jeet Singh are partners in the business.

Ruhi, who moved to Kochi after marriage, says that she is agonised by the plight of the protesting farmers and she thinks it will reflect in the elections.

“We are a big community. All that’s happening is quite disturbing. The farmers are fighting for their rights and livelihood. I pray to Almighty daily for the protestors,” says Ruhi.

The 34- year-old too appreciates the steps taken by the Kerala government in support of the protesting farmers. “We are grateful to the government,” she adds.

Though there are only 30 families, voting is a personal choice, says Ruhi. “No collective decision has been taken on who to vote for. Everybody has their political view,” she says.

However, unlike in other parts of the country and outside, Kochi is yet to see any solidarity movement by the Sikh community to support the protesting farmers. Dharamvir Singh feels that the reasons could be the lack of young members in the community and a fear of backlash from the government.

“Our community is disjointed and small. It won’t make much of an impact. We have aligned ourselves with the local population here. The farmers’ issue moves us all, but it doesn’t impact us directly as we are in diversified fields. There’s also a fear factor because of the way the central government treats its critics,” says Singh.

Another community member, Bunty Sethi, says that the Sikhs who have well integrated into the Malayali society also don’t directly connect with farming. Most of the Punjabis in the city are into automobiles, garments and even restaurant business.

Amarjeet Singh, 68, also shares the pain of the protestors and he is in solidarity with them.

Singh, who belongs to a second-generation Sikh family, moved to Kochi from Patiala, says that Kochi is home for him. He meets with the community members at the Gurudwara in Thevara, the only Gurudwara in the state.

“We discuss farmers' protest at the Gurudwara. We all feel very sad about what’s happening,” says Singh. He feels that the state government has taken the right step in supporting the farmers.

“I am happy with LDF ruling and I appreciate their support to the farmers. The state also has seen a lot of development in the last five years,” he says.

There is dismay among community members over the central government’s apathy towards protesting farmers, say the members. “We have also noticed how Modiji visited the Gurudwara when the protests started. That was to appease the Sikh community to create an impression that he is with the community. That’s all nonsense. They only want to divide people into communal lines,” says Singh.