When media persons asked Vikas Dubey's wife, Richa, what she thought of the events that led to her husband's death, she agitatedly said, 'Yes...Vikas did wrong and he deserved this fate.' 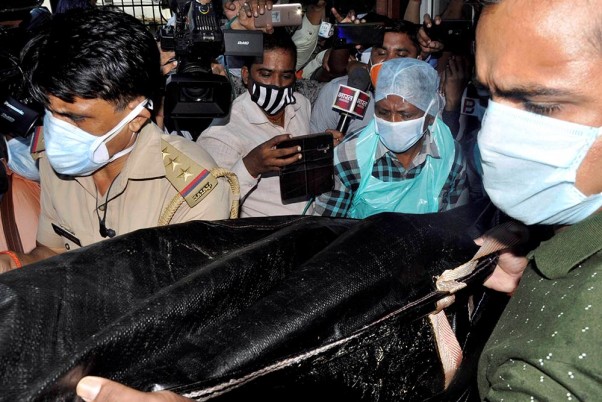 The wife of gangster Vikas Dubey, who was killed in a police encounter Friday, said her husband was “wrong” and deserved "this fate", as his last rites were conducted here amid tight security.

Richa, who came at the Bhairoghat to attend the cremation, also expressed her anger at mediapersons, at times allegedly shouting at them.

Superintendent of Police, Rural, Brijesh Srivastava told reporters that Dubey's brother- in- law Dinesh Tiwari performed the last rites at the electric crematorium in the presence of his wife and son.

Dubey was shot dead Friday morning by police, who claim he was trying to flee after the car carrying him from Ujjain overturned on an isolated stretch of the highway on the outskirts of the city. Dubey had allegedly masterminded the killing of eight policemen on July 2 when they were going to arrest him at his Bikru village.

When asked about these incidents and if she thought her husband deserved such an end, an agitated Richa said, “Yes, yes, yes. Vikas did wrong and he deserved this fate.”

She also allegedly shouted at mediapersons and asked them to leave the place. She also allegedly misbehaved with them and used foul language, even holding them responsible for the encounter killing of her husband.

After the last rites, policewomen took Richa and her son in their vehicle and left for an undisclosed location. No police official was ready to speak whether they were let off.

Vikas' father Ram Kumar Dubey had distanced himself and had justified police action. “Whatever police did was right,” he had said earlier in the day.

When asked if he would attend the cremation, he had said, ”I will not attend the last rites.”

Dinesh Tiwari, who performed the last rites, was earlier detained for questioning by the police immediately after the killing of eight policemen, including Deputy SP Devendra Kumar Mishra.

"Dubey sustained four bullet injuries, three in the upper part (chest) and one in the hand," Kamal had said.

Dubey's other relatives and neighbours shunned the gangster in his death and did not turn up for cremation, despite police request.

Citing Mumbai’s Dharavi As Example, WHO Chief Says Covid Can Be Controlled