The Youth Congress activists were going to Delhi through the Chandigarh-Delhi highway when they were stopped at the heavily barricaded entrance to Haryana by police. Some activists tried to set a tractor on fire after the march was stopped 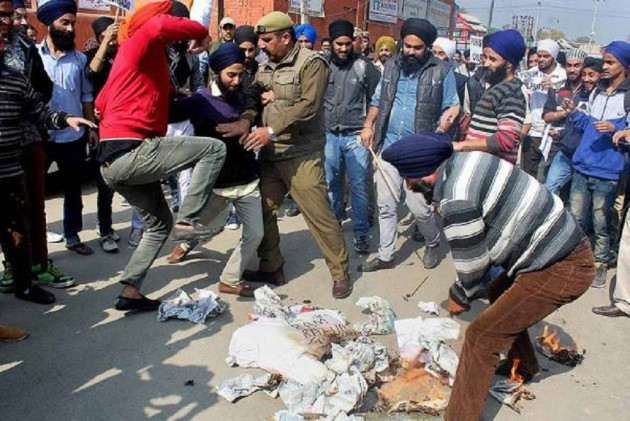 The Haryana Police on Sunday used a water cannon to stop Punjab Youth Congress activists from entering the state through Ambala during a tractor rally against the Centre's farm-related Bills.

The Youth Congress activists were going to Delhi through the Chandigarh-Delhi highway when they were stopped at the heavily barricaded entrance to Haryana by police.

The situation at the Haryana-Punjab border turned tense as the protesters remained adamant to continue their march towards the national capital.

Some activists tried to set a tractor on fire after the march was stopped.

The Haryana Police denied permission to the Youth Congress workers, saying they would not allow the traffic movement on the national highway to be disrupted and also cited the coronavirus restrictions.

After being denied permission to enter Haryana, the Youth Congress activists terminated their protest at the site.

Punjab Congress chief Sunil Jakhar, who also joined the Youth Congress protesters, said all parties, except the Shiromani Akali Dal and the BJP, are standing with farmers for their cause.

Indian Youth Congress president Srinivas B V said his party stands shoulder-to-shoulder with farmers and dubbed the reforms as “anti-farmer”.

Punjab Youth Congress chief Barinder Singh Dhillon told media in Mohali’s Dera Bassi that this is the “beginning of the fight for the rights of farmers”.

Black balloons were also released earlier in the day by the protesters as a mark of protest against the Bills.