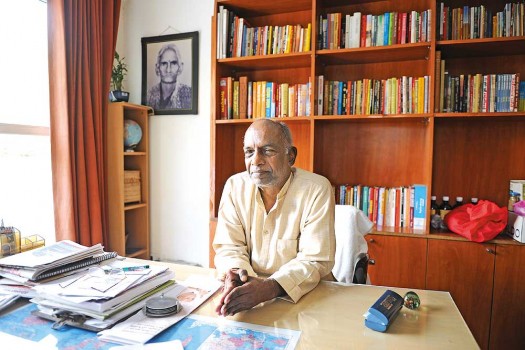 K N Govindacharya, once a key RSS leader, on Friday blamed the liberalisation policies of 1991 for the current economic slowdown and demanded that the government should review the New Economic Policy being followed since years.

Addressing a press conference held on the eve of a two-day all-India steering committee meeting of the Rashtriya Swabhiman Andolan, its founder Govindacharya said India's economic policies should be based on domestic production and consumption.

The concept of development has been completely distorted in the history of the last 200 years of the world, he claimed.

Therefore, the hegemony of state and "immoral marketism" did not result in the creation of a healthy and interdependent society, Govindacharya said.

Ecological sustainability should be the basis of development, also safeguarding the rights and interests of the weakest person in the society, Govindacharya said.

He blamed the liberalisation policies of 1991 for the current situation of "economic recession".

"We must set a favourable example for the world by balancing prosperity with Indian traditions and culture. Nature's enrichment is development," he said.

"Land people ratio in India is different compared with other developed countries, if we follow the path of America then there will be a danger of the country ending up on the lines of Brazil.

"Till 2014, Brazil was also included in the fast-growing economies of the world, after that it fell a victim of severe depression," said Govindacharya, once a key RSS and BJP leader, who has been spearheading independent initiatives to push his economic and cultural views.

India's agricultural sector feeds crores of people and also generates maximum employment, but due to the wrong and impractical policies of consecutive governments, there is a terrible discrepancy in the demand and supply of agricultural products and it results in massive loss in the agriculture sector, he said.

"Due to this, unemployment also increased. Due to the import of agricultural products, farmers were not able to get the right price for their crops and the crisis of unemployment was further deepened," Govindacharya argued.

The organisation demanded from the government that it should announce Minimum Support Price (MSP) for farmers of Jammu and Kashmir like in other states in India.

It also demanded that the Market Intervention Scheme (MIS) for apple farmers of Jammu and Kashmir be implemented as was the case in Himachal Pradesh.

Government 'mandis' should be established and the Mandi Act to be implemented and the government should seriously consider the debt waiver of farmers, small industrialists, businessmen and transporters owed due to the unfortunate circumstances of the last 30 years, the Rashtriya Swabhimaan Andolan said in a statement.

The central government should immediately take over the J&K Bank as it has the potential to become the engine of economic development of the state, it said.

The organisation said will also start a 'Pyas Movement', seeking a ban on what it said was "business of drinking water".