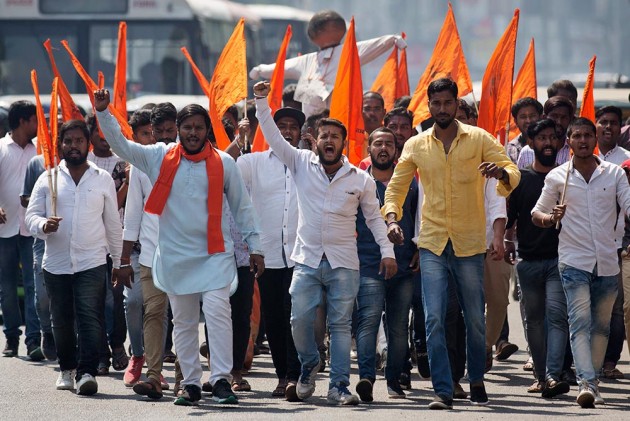 The Rashtriya Bajrang Dal (RBD) on Wednesday held a protest against National Conference president Farooq Abdullah here against his alleged statement that Article 370 would be restored with the help of China.

The National Conference on Monday had denied that Abdullah had made such a remark and accused the BJP of "completely twisting" his remarks made during a TV interview last week.

Amid chants of “desh ke gaddaro ko, goli maro saalo ko” (shoot the traitors), dozens of RBD activists led by their leader Rakesh Bajrangi appeared at the Residency Road here and tried to move towards the headquarters of the National Conference.

However, policemen who were posted in strength foiled their attempt and pushed them back.

The protesters set ablaze an effigy of Abdullah.

"Our protest is against the National Conference president Farooq Abdullah for his recent statement that Article 370 would be restored with the help of China. Jammu belongs to nationalist people and we will not tolerate such kind of statements,” Bajrangi told reporters.

On Monday, the National Conference said Abdullah never justified China's expansionist mindset or its aggression during his interview on Sunday as claimed by JP spokesperson Sambit Patra at a presser in New Delhi.

“Our president articulated the people's anger over the abrogation of Article 370 and 35-A by Parliament on August 5 last year as he has consistently done in recent months. He emphasised that no one in Jammu and Kashmir was willing to accept these changes," an NC spokesman had said.