A phone conversation was unraveled after police put two phone numbers under surveillance in connection with arms smuggling. However, the conversation revealed a conspiracy to topple Ashok Gehlot-led Congress government In Rajasthan, police said. 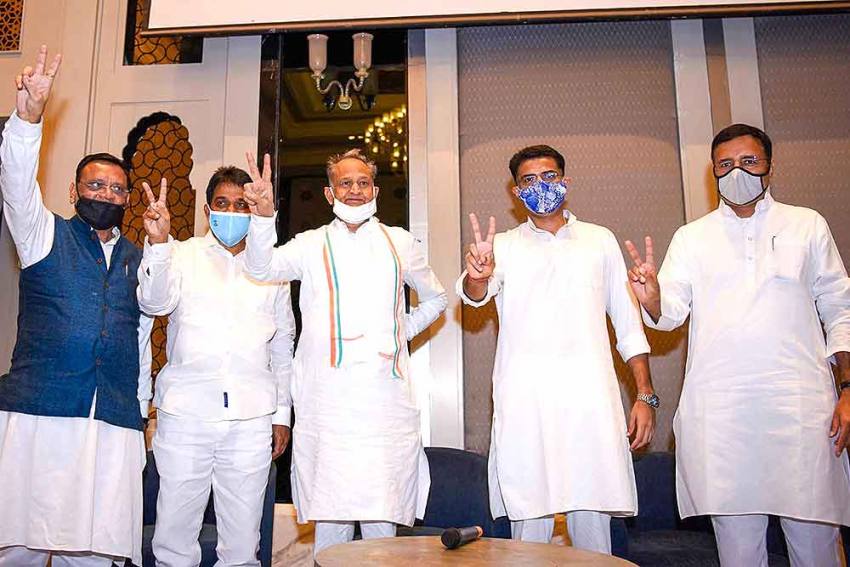 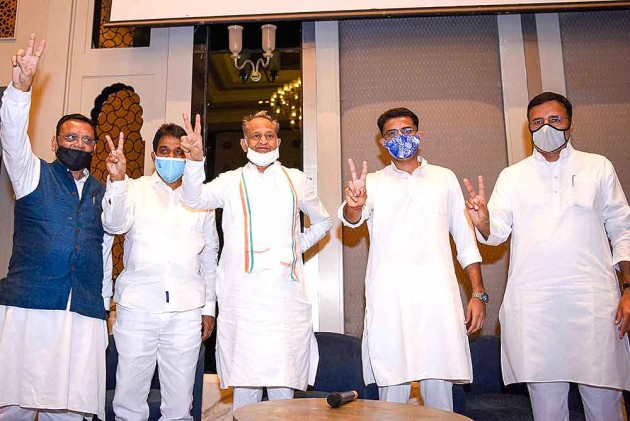 A phone conversation between two persons, who were allegedly planning to topple the Ashok Gehlot-led Congress government in Rajasthan, has created ripples in the state’s political circles.

While Chief Minister Gehlot exuded confidence that the Congress government will complete its five-year term, he accused the BJP leadership of “crossing the limits of shamelessness”. BJP, on its part, has termed Gehlot’s allegation ‘distraction from its failure to manage the Covid crisis.’

The Special Operation Group (SOG) of Rajasthan Police on Friday arrested two persons who were allegedly trying to topple the Congress government in the state by offering Rs 20-25 crore to each Congress and Independent MLAs.

The conversation -- and the alleged conspiracy -- was unraveled after the SOG put two phone numbers under surveillance in connection with arms smuggling. However, the conversation between the two persons revealed a conspiracy to topple the government ahead of Rajya Sabha polls held last month, police said.

"The CM will be made from BJP and the Deputy CM will be made a minister in centre. But the Deputy CM says that he will be the Chief Minister of Rajasthan. His (Pilot's) stars will shine after June 30 and following which he will take an oath," this is an alleged conversation between the two persons who are now in police custody.

Police identified the duo as Ashok Singh and Bharat Malani who were nabbed from Udaipur and Beawar and booked under IPC sections 124A (sedition) and 120B (criminal conspiracy).

Based on their conversations, the SOG has registered an FIR. The Rajasthan Police has also issued notices to Gehlot and deputy CM Sachin Pilot to record their statement in connection with the alleged attempts to poach Congress MLAs.

The FIR states, "The recorded telephonic conversation between these numbers suggests that there were attempts made to bring down the government in Rajasthan ahead of Rajya Sabha polls.”

Interestingly, the FIR says that the conversation revealed the differences between Gehlot and Pilot.

“The conversation reveals the differences between two leaders Ashok Gehlot and Sachin Pilot, which makes it easy for the ruling party MLAs and independent MLAs to drift away. Moreover it says that as soon as the government will topple, a new CM will be made in the state".

In the telephonic conversations, traced by the cops, the persons are also heard discussing that their plan of poaching failed when Gehlot took all his MLAs to a resort ahead of the Rajya Sabha elections. "They discuss if the CM is made as per their wishes, they could easily make money in crores after toppling the government," reads the FIR.

The police claimed that attempts were made to lure Independent MLA from Kushalgarh, Ramila Khadiya. In the telephonic conversations, the affiliations of Mahendra Jeet Singh Malviya, a Congress MLA from Bagidora in Banswara were also being discussed.

Meanwhile on the same Friday late night, around 24 Congress MLAs in a joint statement had alleged that the BJP was trying to bring down the Congress government in the state through horse trading

Reacting to the arrests made by the SOG, Chief Minister Gehlot while addressing the media on Saturday accused the BJP leaders of attempting to topple his government. "While we are fighting the Covid crisis, the BJP is trying to topple the government. The BJP leaders, like Satish Poonia, Rajendra Rathore and Gulab Chand Kataria, on the direction of their central leadership, are trying to bring down the democratically elected government".

In connection to the FIR lodged by SOG, Gehlot said, “Law will take its course.” He said he has received a notice from the SOG in this connection.

Answering a question on the cliams of infighting and differences between the CM and the deputy CM, Gehlot said, "Many people want to become CM, but there can be only one CM. Once a CM takes the charge, everyone else calms down."

The Rajasthan BJP chief Satish Poonia termed these allegations baseless. "The Congress government is diverting the attention of their failure in managing the Covid crisis. Moreover, their internal fight has become public, so they better fix their house instead of blaming the BJP," Satish Poonia told Outlook.

Ahead of the Rajya Sabha elections, Government Chief Whip in Rajasthan Assembly, Mahesh Joshi, had written a letter to the Anti-Corruption Bureau stating that attempts were being made to lure Congress MLAs and independent MLAs to topple Congress government in Rajasthan. Following which, Congress housed its MLAs in a private resort for one week ahead of the polls. 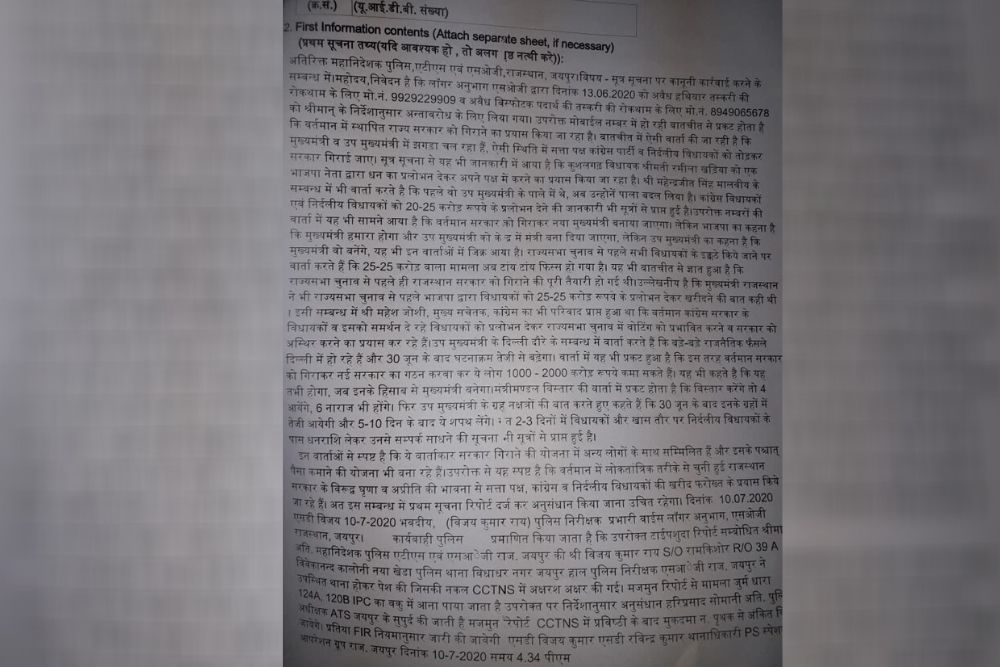 In the house of 200 MLAs in the state assembly, the Congress has 107 MLAs -- six of them were from Mayawati's Bahujan Samaj Party and changed camp last year. It also has the support of at least a dozen independent MLAs. Whereas, BJP has 72 of its own MLAs and the support of six more.