'Situation in West Bengal is similar to that of the Emergency days. #SaveDemocracy,' the JD(S) national president Godwa said. 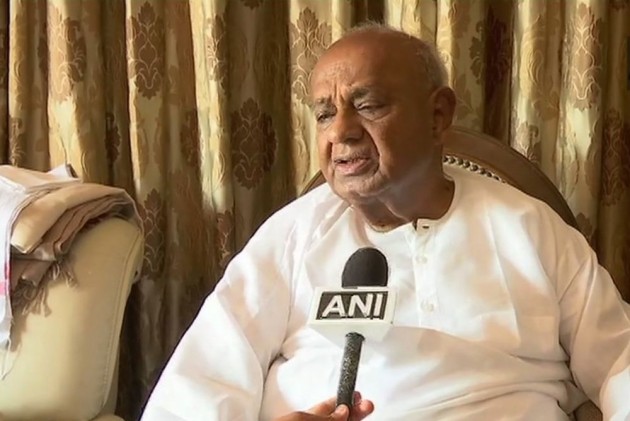 Amid chit fund scam row, former Prime Minister H D Deve Gowda has extended his support and said the massive standoff between the Centre and the West Bengal government over the CBI's attempt to question the Kolkata Police chief reminded him of the Emergency days.

The JD(S) patriarch sympathised with the Bengal government led by Mamata Banerjee and said he was shocked to learn about the CBI rushing to arrest the Kolkata Police Commissioner and the subsequent developments.

Banerjee heads the TMC, a key member of the 'Mahagathbandhan', the grand alliance, in which the JD(S) is also an active partner.

"I am shocked to learn about the CBI rushing to arrest the Police Commissioner and subsequent developments in West Bengal. The country has faced similar kind of unconstitutional methods during the Emergency. Situation in WB is similar to that of the Emergency days. #SaveDemocracy," the JD(S) national president tweeted.

The Congress' Karnataka unit too extended its support toeing the party line. It dubbed the Centre's action as anti-democratic and a threat to the federal system of the country.

"The Bharatiya Janata Party is using the CBI by filing false cases against officers. It is a clear case of political vendetta. We all stand with the Chief Minister of West Bengal," he tweeted.

The senior Congress leader, who has been criticising the NDA government at the Centre for not earmarking sufficient funds and also for excluding Puducherry from the ambit of the Central Finance Commission all along, said, "Time has come for the Narendra Modi-led Central government to go."