6 Killed, 31 Injured As Foot Over Bridge Collapses Near CST Railway Station In Mumbai 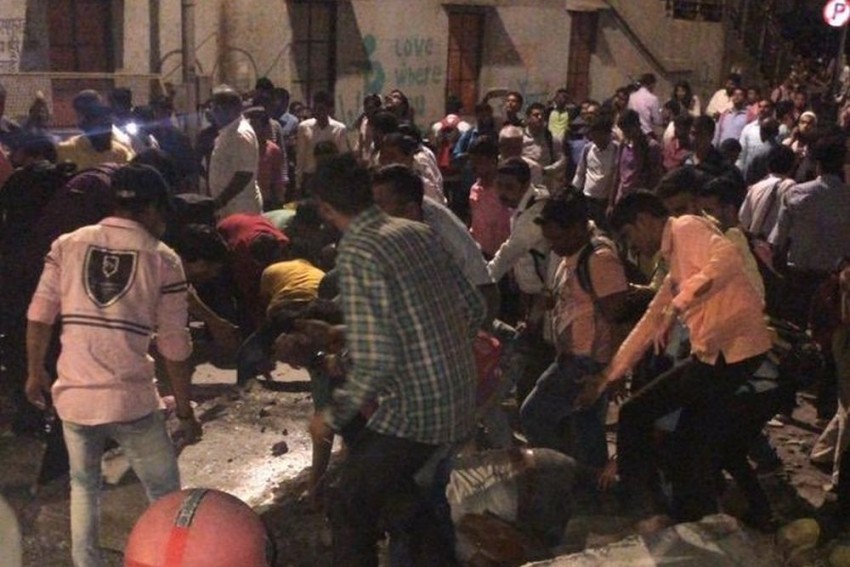 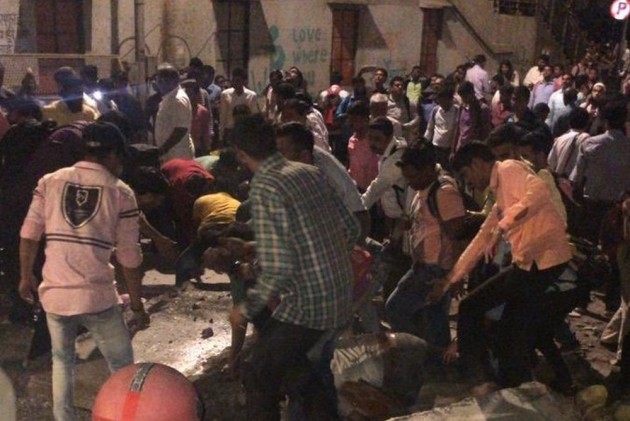 Six persons were killed and 31 injured after section of a foot overbridge near a busy train station in south Mumbai collapsed during evening rush hour on Thursday.

The bridge, which connected the area near the Times of India building with the iconic Chhatrapati Shivaji Terminus railway station station, was commonly called 'Kasab bridge' as the 26/11 Mumbai attack terrorist passed through it during the strike.

All the injured have been admitted to nearby hospitals, a disaster management cell official said.

Just after the incident, Mumbai Police had tweeted: "Foot over-bridge connecting CST platform 1 north end with B T Lane near Times of India building has collapsed. Injured persons are being shifted to hospitals. Traffic affected. Commuters to use alternate routes. Senior officers are on spot."

Foot over bridge connecting CST platform 1 north end with B T Lane near Times of India building has collapsed. Injured persons are being shifted to hospitals. Traffic affected. Commuters to use alternate routes. Senior officers are on spot.

A 45-member NDRF team was rushed to the bridge collapse site in Mumbai.

The incident took place around 7.30 pm. Some motorists who were passing beneath the bridge when it came down, were among those injured.

Prabhu and Tambe were staff members of the G T Hospital, the official said.

The tragedy comes eight months after another bridge collapsed in suburban Andheri, in which five persons were killed.

Maharashtra Chief Minister Devendra Fadnavis announced a compensation of Rs 5 lakh each to the family of the deceased and said a high-level committee will probe the circumstances under which the 40-year-old over-bridge collapsed.

"The injured persons will get Rs 50,000 each and the government will bear the cost of their treatment," Fadnavis said, adding that officials found responsible for the incident will be booked.

"I have ordered a high-level inquiry into this unfortunate incident which puts a question mark over the authenticity of the structural audit of bridges carried out across the city," he added.

Prime Minister Narendra Modi expressed his anguish on the death of people due to the foot overbridge accident.

"Deeply anguished by the loss of lives due to the foot over bridge accident in Mumbai. My thoughts are with the bereaved families. Wishing that the injured recover at the earliest. The Maharashtra Government is providing all possible assistance to those affected," he said in a tweet.

Deeply anguished by the loss of lives due to the foot overbridge accident in Mumbai. My thoughts are with the bereaved families. Wishing that the injured recover at the earliest. The Maharashtra Government is providing all possible assistance to those affected.

"I am very sad to hear about the Mumbai foot over bridge accident. I express my deep condolences to the families of the people who died in the accident. I pray that those who are injured recover as soon as possible," he said in a Facebook post in Hindi.

An eyewitness said the over-bridge was being used by pedestrians even as repair works happened in the morning.

"Fire brigade personnel reached the spot immediately and rescue work is in full swing. We have appealed the motorists to avoid the D N Road to JJ Flyover section," he said.

Another eyewitness said most of the victims were walking on the overbridge on their way to the CST station when it collapsed.

"Thankfully, when the bridge collapsed, it was red signal at the nearby road, otherwise several people would definitely have been crushed under the rubble," said a taxi driver, who luckily escaped the tragedy.

Soon after the disaster, elected representatives and local party leaders rushed to the spot amid raging political blame-game.

Arvind Sawant, the local MP from the Shiv Sena, dubbed the incident as most unfortunate and said, "This ill-fated bridge was placed under minor-repairing after the audit of all the bridges in the city. Action will be initiated against the responsible officials."

Local BJP MLA Raj Purohit also visited the spot and demanded immediate action against the engineer who had declared the bridge as "safe".

"Strictest action should be taken against the engineer who declared this bridge as safe and he should be arrested right now. He is responsible for the entire disaster," he said.

Local Shiv Sena corporator Sujata Sanap said she had alerted concerned officials about the unsafe structure, but they did not act in time.

Speaking to reporters, she said, "I have been pursuing the issue of this unsafe bridge since long and also wrote so many letters to officials but they were ignored."

The bridge collapse will be jointly probed by the BMC and Central Railways officials, said Vinod Tawde, District Guardian Minister of Mumbai.

"The audit report of the BMC had found a need of minor repairs to the bridge," he said.

Meanwhile, Congress leader Milind Deora said murder charge should be slapped on structural auditors who inspected the bridge and the BMC officers who appointed them.

"Mumbaikars feel very much unsafe in the city, considering the frequent incidents of bridge collapses," the former MP said.

"I am not politicising the issue, but hollow promises are not going to serve the people anyway. This is failure of the government and the system," he added.

On July 3 last year, portion of a road over-bridge had collapsed in suburban Andheri. Railway Minister Piyush Goyal had then announced a joint safety audit of all 445 bridges in Mumbai as part of efforts to improve safety.

Following the order, the railways, the Brihanmumbai Municipal Corporation (BMC) and the IIT-Bombay had conducted the safety audit.