In the second part of her 4-part series, poet and activist Meena Kandasami continues reporting from Ground Zero of an unfolding grassroots movement in Tamil Nadu that has escaped the attention of mainstream media. 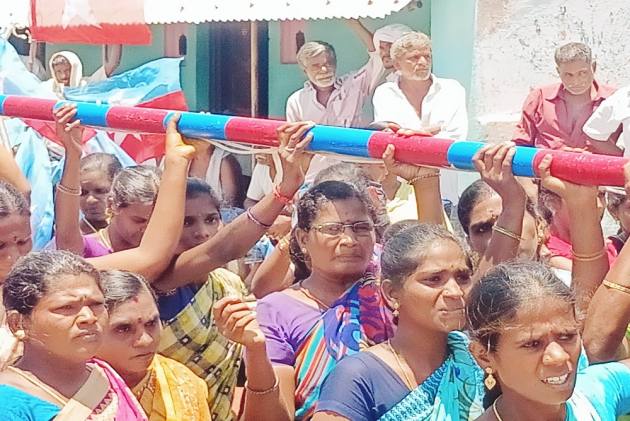 The VCK flag is no stranger to Pudu Viraalippatti. Back in the late 1990s, when VCK was known as DPI—when it was a people’s movement, not an electoral party—a flag had been hoisted on a bamboo pole. Details of how it eventually disappeared are hazy, lost from public memory in a tangle of competing narratives. This year, when local VCK functionaries Kannadasan and Nithyavalavan (names changed to protect identities) wanted to organise a tree-planting, sweet distribution and flag-hoisting ceremony to celebrate the birthday of the party’s founder-president Thirumavalavan on August 17, police refused them permission, reportedly saying that the VCK flag could cause communal tension.

Afterwards, the first peace committee meeting, with representatives from VCK and caste Hindus, took place at the taluk office on Sept 3. It was inconclusive—caste Hindus reiterated they wouldn’t allow the VCK flag to be hoisted, while VCK stood firm in its decision to go ahead with its celebrations.

So opposed to the VCK symbol and visibility were the oppressor castes, that they even offered to take down their Dravidian flags (DMK, AIADMK). This argument was used by the tehsildar, who tried to convince the Panthers to give up their demand on grounds of equivalence. 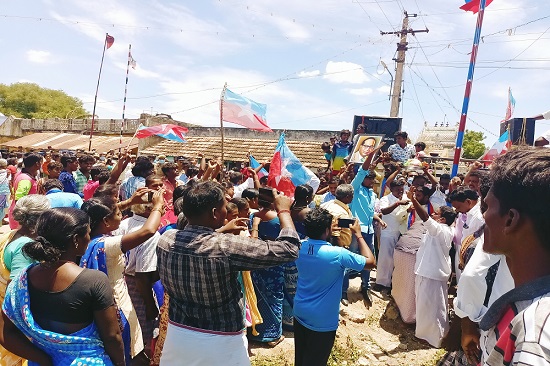 And that’s how the ideological core of mainstream parties unravels at local level, where caste tensions are sharpest, according to the Dalit women I spoke with. Instead of confronting caste directly, they strike a compromise with its most poisonous elements.

Earlier, on September 4, before the VCK could take out its flag procession, police had warned activists they would be arrested if they went ahead with their ceremony. The police were well aware there was nothing illegal about it, and that the only way they could thwart VCK from carrying out its agenda was by saying the activists lacked necessary permits. When it was pointed out that none of the flags already flying at the spot had those permits, they said they will remove all flags.

Early in the morning of September 5, around 20-30 cops were deployed in the village. Within a few hours, revenue officer Aruganantham, inspector Jeyaraman and DSP Sanjeev Kumar reached the spot. Over 200 oppressor caste residents including over 40 women, all armed with stones, congregated near the site and shouted abuses and death threats at the Dalits. They threw sand in the air and uttered curses wishing the Dalits evil.

With their backs to the wall, the Dalit women, along with a few of their men, led a procession from within the cheri to the main road, bearing a massive framed photo of Ambedkar on a heavy blue-red flagpole, chanting Panther slogans to the sound of festive drums. They managed to push past the police. Local VCK office-bearers, who wanted to avoid confrontation, did their best to exercise restraint and prevent escalation. Over the microphone, an office-bearer even extended an olive branch to the caste Hindu protestors: “Please come and hoist the VCK flag. This is a party for all people. Our leader takes up your issues all the time. We were the first to fight for OBC reservation in medical seats. It will be a great honour if you relent and hoist this flag yourselves.”

But the pleas went unheeded. The oppressors staged a road roko in protest. Exercising caution, and to prevent a fracas, the Dalit activists retreated to their cheri, and by 4pm, party functionaries also left the village after planting 10 saplings. 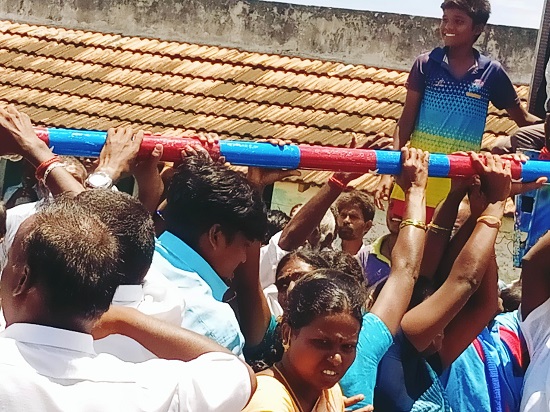 On September 6, two miscreants on bikes tore the Panthers’ flag and took it away. Dalit women immediately launched a sit-in, demanding arrest of the culprits, even as they hoisted the flag in the dark of the night. Police made two arrests, although the case was not filed under the Prevention of Atrocities Against SC/ST Act.

At the subsequent peace committee meeting organised by the sub-collector on September 7, representatives of the oppressor castes (Naidu, Chettiar and Vellalar) again offered to take down their own flags. VCK representatives stood their ground. Upon receipt of notices from the panchayat president on September 8, stating that none of the flagpoles had requisite permission and that in the interests of maintaining communal harmony among the villages, all parties were asked to remove their flag poles on their own volition, within a stipulated time period. With total consent from local DMK and AIADMK representatives, police uprooted their respective flag poles the following day, bolstering the bureaucratic push for a no-flag policy, and to put pressure on VCK to remove their flag and pole. What wears the mask of neutrality, equal treatment and depoliticisation of a public space is casteism-in-disguise—an effort to prevent and erase Dalit aspirations.

The Dalit women of Pudu Viraalippatti wore their bravery lightly when I met them. “On any other day, we’d have run away on seeing cops. But that day was different. We were willing to face whatever happened.” They were rankled by the attitude of the caste Hindu women, though. “Overnight, their friendship evaporated,” says Chitra, adding, “Our school friends stopped talking to us, even on the bus.” Her friend Lakshmi joins in, “This only means they had been acting all these years. Now we know their true nature.”

They sense there is a new caste diktat in place to ostracise them further, by avoiding any engagement. “When we met at a social function at another village, we tried to catch up. But they avoided us,” Chitra says. Another woman adds, “We don’t see them as enemies. They are doing as they are being told.”

Ambeth Gokul, an activist from the VCK’s Radical Students Front, points out that ruling classes have conveniently come together, as expected. He expresses his disappointment over the silence of democratic forces. “This is not a party issue, but one of democratic rights. Why is there an absence of dialogue and discussion from so-called progressive forces? If this does not engender debate, how can we convince the masses that debate, not confrontation, is the way forward?”

Programmed to placating caste Hindus, the bureaucracy doesn’t stop for a second while scuttling democratic rights of Dalits. Aligned entirely with oppressors, it remains complacent and does not interfere when Dalits face economic and social boycotts.

VCK positioning itself as a party for all in the last few years, has given some ammunition to the Dalits of the village in challenging segregation and discrimination. A common refrain among many Dalits I met was: “Why do caste Hindus look at VCK as a caste party, or its flag as a caste flag? Our party and our leader regularly raises issues of OBCs. Why then should we remove our flag? It’s their flag as well.” However, in the absence of other parties coming out in support of VCK, the Panthers are left facing the brunt on their own.

In a way, what VCK has been facing in Tamil Nadu over the past few decades, has parallels with what communists faced in the 1950s. The red flag was seen as an affront to feudalism and caste hierarchy, the labouring classes standing up for their rights, a threat by the ruling caste/class combine. Which is why the lack of alacrity among Tamil Nadu’s Parliamentary Left, in extending solidarity to the Panthers, leaves a lot to be desired. The silence of mainstream parties on the question of the right to hoist a party flag—something that should concern everyone—is perturbing. I left with a sense of foreboding about India’s democracy experiment coming off at the seams.