The Assam-Mizoram border tension escalated on Monday after violence broke out at Lailapur in Cachar district on the interstate border. 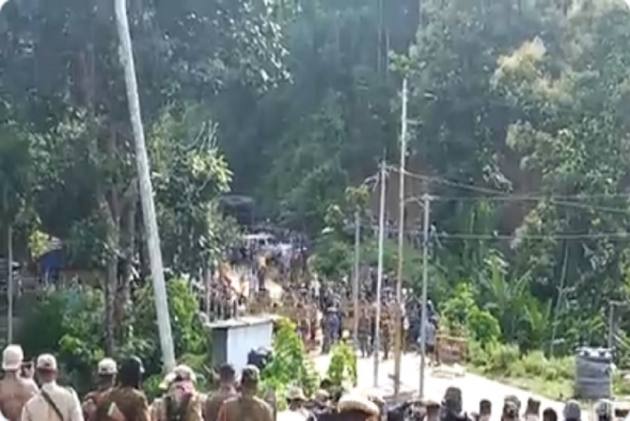 Five Assam Police personnel and a civilian died in clashes at the Assam-Mizoram border on Monday while around 50 others, including  Cachar district SP, were injured when civilians and police from Mizoram allegedly opened fire on them in one of the worst interstate border clashes in the northeast.

The five policemen had suffered injuries earlier in the day to which they succumbed at the Silchar Medical College and Hospital where the others were also undergoing treatment
Assam chief minister Himanta Biswa Sarma confirmed the death of the five policemen saying he was pained and expressed his condolences to the bereaved families.

In a tweet, he said, “I am deeply pained to inform that six brave jawans of @assampolice have sacrificed their lives while defending constitutional boundary of our state at the Assam-Mizoram border. My heartfelt condolences to the bereaved families.”

I am deeply pained to inform that six brave jawans of @assampolice have sacrificed their lives while defending constitutional boundary of our state at the Assam-Mizoram border.

My heartfelt condolences to the bereaved families.

Television footages showed injured policemen being rushed to the hospital at Silchar with many bleeding profusely from bullet wounds.

Assam Special DGP (Law and Order) G P Singh has rushed to the spot while DGP Bhaskar Jyoti Mahanta will visit the area on Tuesday.

Mizoram home minister Pu Lalchamliana blamed Assam for Monday’s “unfortunate” incidents. He said around 200 armed Assam police personnel along with an IGP, Cachar deputy commissioner and SP and DFO had arrived at Vairengte at around 11.30 am and run over a section of Mizoram Police. Besides, they also damaged vehicles.

“When residents of the area arrived there to enquire, they were also assaulted, lathicharged  and teargassed causing injuries to several persons,” he said.

According to him, the Kolasib district SP also went to take stock of the situation, but around 4.15 pm the Assam police personnel fired tear gas canisters and grenades. Mizoram police also fired back even while the Kolasib SP was still there trying to negotiate. “It all started with the aggression by the Assam police,” he said.

He said the Assam police personnel withdrew only after the Union home minister intervened in the matter.

The Assam-Mizoram border tension escalated earlier in the day with chief ministers of the two states turning to the Centre for help while blaming each other’s forces and citizens after violence broke out at Lailapur in Cachar district on the interstate border.

There were reports of gunshots being fired from the Mizoram side besides stone-pelting. The Cachar district deputy commissioner’s convoy also came under attack and his vehicle was vandalised.

Mizoram chief minister Zoramthanga tweeted seeking union home minister Amit Shah’s intervention. He also shared a clip showing police trying to stop a clash among men armed with sticks. His Assam counterpart Sarma said a superintendent of police from the neighbouring state had asked  Assam’s officials to withdraw from their post. “How can we run the government in such circumstances,” he asked Zoramthanga in a tweet while hoping for his earliest intervention. The tweet tagged the union home minister and the prime minister’s office.

Following Sarma’s tweet, Zoramthanga in another tweet said,  "After a cordial meeting of CMs (chaired) by Shah, two companies of Assam Police with civilians lathicharged and tear-gassed civilians at Vairengte Auto Rickshaw stand inside Mizoram today. They even overrun CRPF personnel/Mizoram Police."

Sarma later told the media that he had spoken to Zoramthanga and asked that restraint be exercised on both sides. He said Mizoram claims the disputed police post as theirs and they were carrying out renovation, but Assam police claimed it was new and was now under their control.

Monday’s development comes within a couple of days of the union home minister chairing a meeting of the chief ministers of all the eight states of the Northeast in Meghalaya capital Shillong. The meeting had discussed border disputes among several states of the region and agreed these should be resolved amicably at the earliest.

Sarma had said that while some progress had been made with Arunachal Pradesh and Meghalaya, there was some tension at the border with Mizoram but he was hopeful it could be sorted out.

On the other hand, Zoramthanga said the border disputes in the region were a legacy of the colonial era and lasting peace between states was important for further development.