Farooq visited under construction Zojila and Z-Morh projects that will provide all-weather connectivity between Kashmir and Ladakh.

Former Chief Minister and MP from Srinagar Farooq Abdullah's visit to the under-construction Zojila and Z-Morh tunnel projects near Sonamarg and reviewing their status has made the BJP upset. The BJP called it Farooq’s photo opportunity.

On Sunday, Farooq visited under construction Zojila and Z-Morh projects that will provide all-weather connectivity between Kashmir and Ladakh. While interacting with officials there, he said the projects will give a flip to the whole set of economic activities in the region and transform the state of people from that of despondency to opulence. “I express my gratitude to the executing agencies, engineers, and scores of workers who have been working day in and day out on the projects. I hope the projects will give a flip to the tourism potential of the Sonmarg-Kargil-Ganderbal circuit and bring more out of sight places in the region on the tourist map of the country,” he said.

He said such tunnels and highways are critical to the development of any nation. “It is a milestone that will provide faster connectivity and usher in prosperity to the people living in these areas. Such all-weather connectivity is much needed in this part of the world as the people living in the upper reaches have to face many hardships to even avail even basic facilities like health care and essential food supplies,” he said. 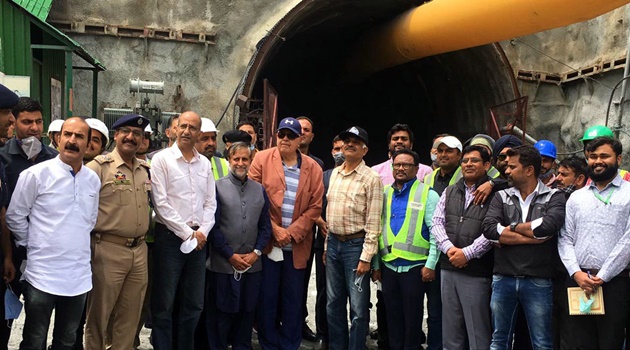 During the visit, the locals urged Farooq that they should be given first preference for jobs in the projects. In response, Farooq said he will take up the matter with Union minister Nitin Gadkari.

However, the BJP is miffed with the visit. BJP spokesperson Abhijeet Jasrotia said, Farooq is taking false credit for BJP’s developmental works. He also said that the Zojila tunnel was a strategic work of high defence priority which was never on the agenda of Congress and NC but it was delivered by the BJP government which is consistently enhancing the defence power of the country. “This tunnel is of immense importance from a defence point of view as it was the only lifeline to connect Kashmir with Ladakh, which is bordering Pakistan and China. But congress intentionally kept it in abeyance as security of the nation never their agenda.”

Last year in October, the first ceremonial blasting of Zojila Tunnel, the longest tunnel road in Asia was carried out. With a length of 14.83 km, the tunnel would be the longest bi-directional tunnel in Asia connecting Kashmir Valley to the Ladakh region making the road fair weather. While the Z-Morh tunnel is 6.5 km long and will provide all-weather connectivity to Sonmarg. The project was first conceived in 2005 and its detailed Project Report (DPR) was prepared by BRO in 2013. The Project was eventually given to NHIDCL in July 2016 for implementation on EPC mode.

Zojila pass is situated at an altitude of 11,578 feet on the Srinagar-Kargil-Leh highway. The highway remains closed during winters, from December to April, due to heavy snowfall and avalanches on the Zojila pass cutting off the Leh-Ladakh region from Kashmir and the rest of the country.