Farmers' Protest: Tomar Targets Opposition, Says It Has Become Its Nature To Oppose

Farmers may face difficulty in the short run but in the long run the reforms will prove beneficial, says agriculture minister. 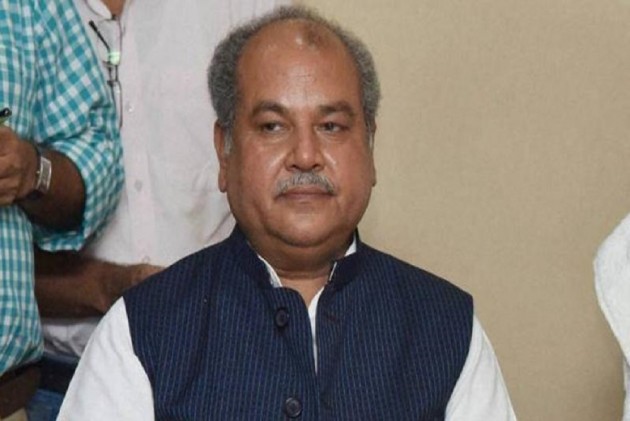 As farmers' protest entered the third week, Union agriculture minister Narendra Singh Tomar on Sunday accused Opposition parties of running a propaganda against the new farm laws and asserted that these legislations "may cause difficulty for some in the short term" but will be beneficial to farmers in the long run.

Tomar, who is leading negotiations with the 40 protesting farmer unions to break the deadlock, was addressing a delegation of over 100 farmers from Uttarakhand who came to extend their support to the laws.

Minister of state for agriculture Kailash Choudhary and Uttarakhand Eeucation minister Arvind Pandey were present in the meeting.

Farmers’ Protests: Arvind Kejriwal Expresses Solidarity, To Go On A Fast On Monday

"When the agricultural reforms were brought, there was opposition to this too.... There are some people who just oppose and weaken the country. This has become their nature," the agriculture minister said.

On agricultural sector reforms, the discussion has been going on for last many years, Tomar said.

"Unfortunately the previous governments who wanted to reform were not able to it. Since they could not try, they did get the credit," he added.

Tomar stressed that for a new India, reforms are necessary.

"When reforms are undertaken it will benefit farmers in the long run. But in the short run, some may face difficulty. We know we can achieve no gain without difficulties," the minister said.

"Any good government or good leader is one who does such work that not only ensures the country's safety for now but also boosts growth in the next hundred years," the Minister said.

The Prime Minister has fulfilled the long-pending demand of farmers, Tomar said.

National Farmers Commission, Planning Commission and Niti Aayog also raised these issues but the previous governments did not do, he said.

"Manmohan Singh Ji (former Prime Minister) tried many times but could not do. Today when it is implemented, propaganda is being spread," Tomar said.

The deadlock continues between the central government and protesting farmers on three new farm laws.

Farmer unions, particularly in Punjab and Haryana, say that the new laws will lead to the dismantling of the MSP system under which government agencies buy their crop at an assured price.

In its proposal to farmers on Wednesday, the Centre had said it will give a written assurance that the MSP system will remain and also redress their other key concerns.

The unions, however, are demanding complete rollback of the central laws and have threatened to intensify their agitation.

Thousands of farmers have been staying put at Delhi border points -- Singhu, Tikri, Ghazipur and Chilla (Delhi-Noida) -- for two weeks against the Centre's new farm laws.

On Thursday, the government had asked farmer groups to reconsider its proposals for amending the Acts to address their concerns and said it was open to discussing its offer further whenever the unions want, but protesters remained defiant.

Tomar had on Friday said some "anti-social elements" were conspiring to spoil the atmosphere of the peasants' movement under the guise of farmers and appealed to the protesting farming community to be vigilant against their platform being misused.

At least five rounds of formal talks have taken place between the central government and representatives of thousands of farmers, mainly from Punjab and Haryana, but the deadlock has continued with the unions sticking to their main demand for the repeal of the three contentious laws and repeatedly rejecting the Centre's offer to make some changes in law and give written assurances or clarifications on a few issues such as MSP and mandi systems.