Protesters, including women, carrying their respective union flags as well as black flags shouted slogans against the BJP-led government at the Centre for not acceding to their demands. 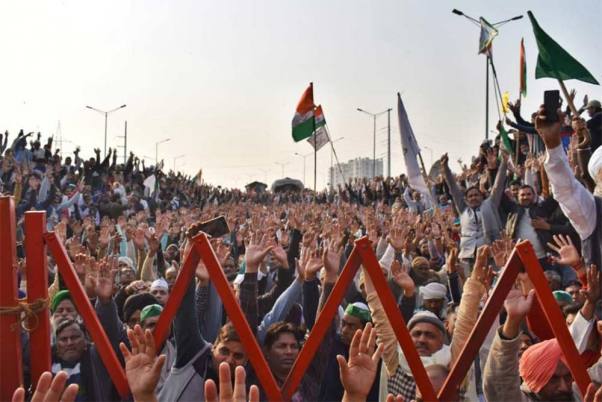 To mark the completion of 100 days of their agitation against the three farm laws passed by the Centre, protesting farmers on Saturday blocked the six-lane Kundli–Manesar–Palwal expressway at some places in Haryana.

Beginning around 11 in the morning, the protest is likely to be ended by evening.

The call for blocking the expressway was given by the Samyukta Kisan Morcha, an umbrella body of protesting farmer unions spearheading the agitation against the agriculture-related legislations.

The 136-km Kundli-Manesar-Palwal (KMP) expressway is also known as the western peripheral expressway.

Farmers in Haryana's Sonipat district brought their tractor-trolleys and parked them in the middle of a stretch of the KMP expressway.

Protesters, including women, carrying their respective union flags as well as black flags shouted slogans against the BJP-led government at the Centre for not acceding to their demands.

“Our agitation against three farm laws will continue unless the Centre withdraws these laws. We will not step back,” a protester in Sonipat said.

In Palwal district too, farmers staged a dharna.

The KMP expressway was built to decongest the ever-busy roads of Delhi, especially by reducing the number of trucks entering the national capital, thus helping to curb pollution.

It provides a high-speed link between northern and southern Haryana districts and gives an uninterrupted high-speed link for traffic, especially commercial traffic, from Haryana to neighbouring states.

Thousands of farmers have been protesting since late November at the Delhi borders with Haryana and Uttar Pradesh, demanding a rollback of the Farmers' Produce Trade and Commerce (Promotion and Facilitation) Act, 2020; Farmers' (Empowerment and Protection) Agreement on Price Assurance and Farm Services Act, 2020; and Essential Commodities (Amendment) Act, 2020.