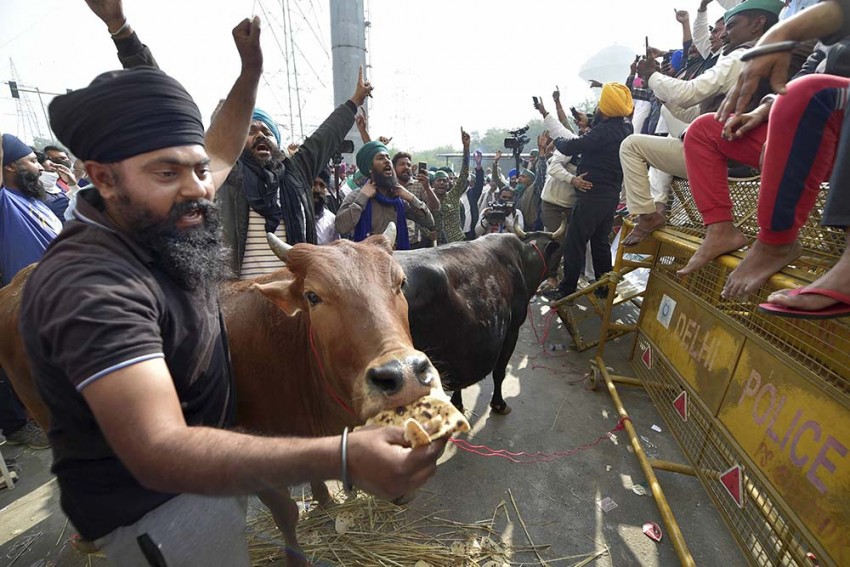 A farmer feeds a cow as others raise slogans at a protest during their ongoing agitation against new farm laws, at Ghazipur Delhi-UP border, in New Delhi.
PTI Photo/Vijay Verma
PTI 2020-12-02T16:04:56+05:30 Farmers' Protest Intensifies As More Protesters Gather At Delhi Borders 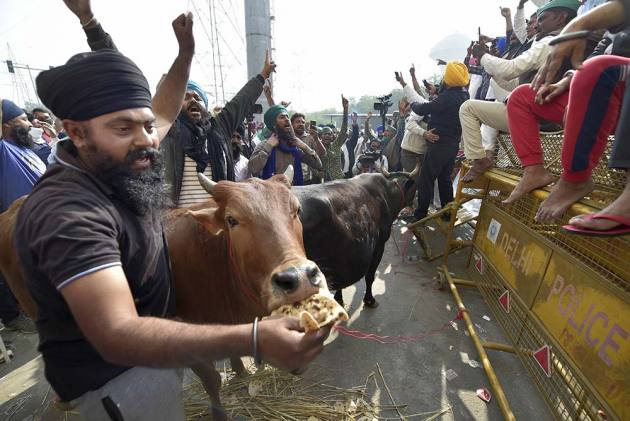 The number of protesting farmers swelled at Delhi border points on Wednesday as police stepped up security after thousands blocked key gateways into the national capital for the seventh day on the trot, leaving commuters to face a harrowing time.

The protest at the Delhi-Uttar Pradesh border in Ghazipur intensified leading to the closure of a key route connecting the national capital with Uttar Pradesh.

“The Chilla border on Noida link road is closed for traffic due to farmers' protests near Gautam Budh Dwar. People are advised to avoid Noida link road for going to Noida and use NH 24 and DND instead,” the traffic police tweeted.

At the Chilla Border which connects Delhi with Noida, more farmers from Firozabad, Meerut, Noida and Etawah started gathering, prompting the authorities to close the key road stretch for the second consecutive day.

The protestors at the Delhi-Noida border belong to various districts of western Uttar Pradesh and want to reach the national capital to join the bigger stir launched by the farmers of Punjab and Haryana against the Centre's new agriculture reform laws.

"More farmers from several districts, including Firozabad, Meerut, Noida and Etawah, are on their way to Chilla border. We will not leave this place until our demands are met," Ramkishan, a protesting farmer, said.

A protestor camping at the Ghazipur border said farmers are here despite facing huge losses back home.

"This is the time we harvest sugarcane. But this is more important. We will continue to protest until the government agrees to our demands," Sonu, a member of Muzaffarnagar Bharatiya Kisan Union, said.

The Delhi border points remained under heavy police deployment with concrete barriers and multi-layered barricades in place as the farmers continued their agitation against the new farm laws.

According to police, checking of vehicles has also been intensified at the border points as a precautionary measure in view of the 'Delhi Chalo' protest march by farmers.

"Cemented barriers and multi-layered barricades have been put up besides heavy security personnel at Ghazipur border near UP gate where many farmers have been protesting since Saturday," a senior police officer said.

The protest against the new farm laws is set to continue as talks between three Union ministers and farmer groups ended in a stalemate on Tuesday after they rejected the government's suggestion of a new committee to look into the issues raised by agitating farmers.

The two sides, however, have decided to meet again on Thursday.

The city police have kept the Haryana-Delhi border at Singhu and Tikri closed for traffic.

Two more border points connecting the national capital with Gurgaon and Jhajjar-Bahadurgarh were also closed as precautionary measures on Tuesday. With this, five border points, including Singhu and Tikri, have so far been closed due to the protest.

The traffic police said the borders at Tikri, Jharoda and Jhatikra are closed for all kinds of “traffic movement”. The Badusarai border is open only for two-wheelers.

As traffic spilled over to alternative routes, it led to long jams there as well.

The commuters entering or exiting Delhi faced inconvenience as the protesting farmers blocked key entrances to the city.

Earlier in the day, Congress leader Rahul Gandhi attacked the Centre over its claim of doubling farmers' income and alleged that their income has in fact "halved" under the 'suit-boot sarkar', while that of its crony friends has grown four times.

"They said farmers income will be doubled. What they did was increase incomes of 'friends' four times and those of farmers will be halved. This suit-boot government is of lies and loot," he tweeted in Hindi.