Bharat Bandh on February 6: The mega rally has been called against the internet ban by the Centre, as well as in response to Budget 2021 that ‘ignored’ the demands of farmers.

The ongoing farmers’ agitation has entered its 73rd day and the farmers have continued to camp at the Singhu, Ghazipur, and Tikri borders around the national capital. The protesting Kisan unions have called for a nationwide ‘chakka jam’ on Saturday blocking all roads across the country. The mega rally has been called against the internet ban by the Centre, as well as in response to Monday’s Budget 2021 that “ignored” the demands of farmers.

The Delhi Police has beefed up security, deployed additional forces at borders, studded iron nails on the road and built walls for barricading as farmers try to enter the national capital.

On Thursday, going firm on their demand, hundreds of farmers spent another night in the cold and withstood spells of drizzle at Ghazipur border. 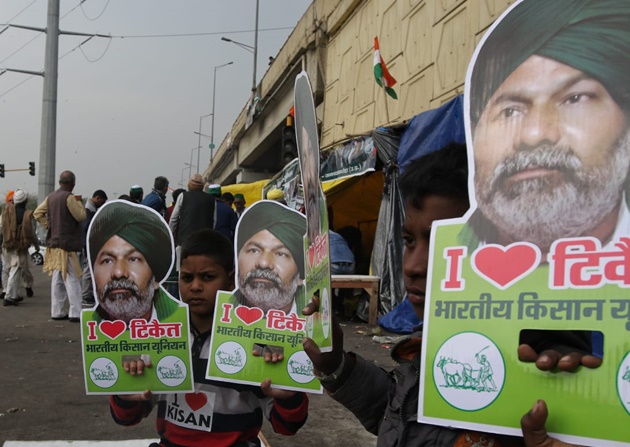 The movement to continue till October:

Bharatiya Kisan Union (BKU) leader Rakesh Tikait, leading the stir since November with his supporters, said the movement at Delhi's outskirts could continue till October this year and would be supported by villagers.

Blockade in UP, Rajasthan, Haryana:

Rakesh Tikait said the blockade will not be done in Delhi but will take place in other parts of the National Capital Region, which comprises parts of Uttar Pradesh, Haryana and Rajasthan, and the rest of country including the southern states.

“Dilli mein hum nahi kar rahe, wahan to raja ne khud qile-bandi kar li hai humare jaam karne ki zaroorat hi nahi hai (We are not going to do anything in Delhi, the king there has already fortified it, there is no need for us to do a blockade now),” he said.

On the proposed 'chakka jaam', he said, “There will be a three-hour blockade on roads. It won't happen in Delhi but other parts of the country. The vehicles which will come and stop will be given water and food. Items like 'chana' and peanuts will also be distributed to these people and we will apprise them of what the government is doing with us.” 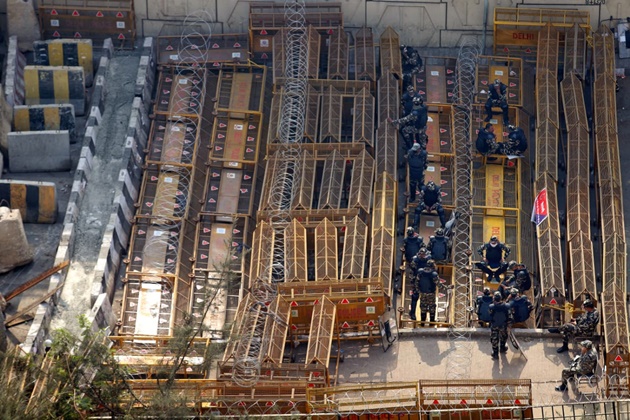 Addressing a press conference, farmer union leaders said that highways and roads would be blocked between 12 noon and 3 pm on Saturday, February 6. All major routes are expected to be blocked not just in the national capital but across the country.

The Bhartiya Kisan Union had announced that there would be a country-wide agitation on February 6 against the contentious farm bills.

“Our February 6 protest would also be against this harassment faced by journalists who are trying to report the truth from the ground and the Twitter restrictions,” Balbir Singh Rajewal, a farmer leader from Punjab, and part of the SKM said.

The Ministry of Home Affairs has already extended the suspension of internet services at the farmer protest sites in Singhu, Ghazipur and Tikri borders till Tuesday night.

Internet services were also temporary suspended in some parts of Delhi on January 26, when large scale violence was reported during the farmers’ tractor rally.

Swaraj Abhiyan leader Yogendra Yadav alleged the action against the Twitter account was taken on the “request of government authorities”, adding accounts of some private individuals, who have been very vocal against the movement, have also been restricted.

The administration has left no stones unturned in attempting to thwart the protest. The police have beefed up security at the Ghazipur border between Delhi and Uttar Pradesh - the new focal point of the farmers' agitation.

Following farmers' chakka jam announcement, Rajewal said the trains were being diverted to prevent the farmers from reaching the protest sites in the national Capital from the neighbouring states.

As the number of protesters continues to swell at farmers' protest sites, the Delhi Police has put up multi-layer barricades, spikes on roads, concertina wires and also parked buses sealing the main entry points to prevent the movement of protesters agitating against the Centre's farm laws. 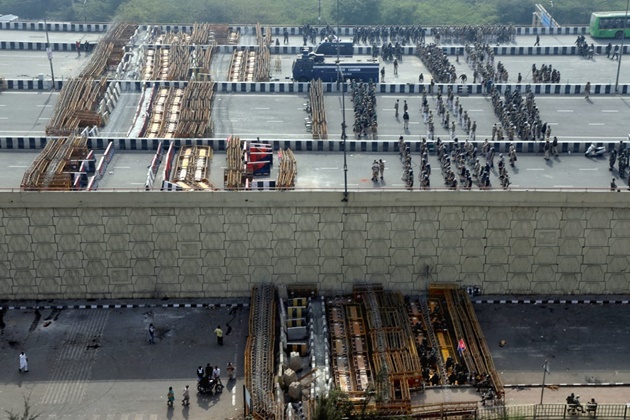 The iron nails studded on roads have been "repositioned" behind the barricades, Deputy Commissioner of Police (East) Deepak Yadav.

At Singhu border, workers under the watch of police personnel on Monday were seen hooking iron rods between two rows of cement barriers on a flank of the main highway to put up a makeshift wall, to further restrict the movement of protesters.

However, Tikait said, “The farmers will pull out all iron nails of the government, and also pull out those fixed at protest sites one by one,” he said, on the police repositioning iron nails at the protest sites.

On further talks between the farmers and the government to break the impasse, he said that decision will be taken by the committee of the farmer's unions.

Police and paramilitary forces, deployed in large numbers here in the wake of the Republic Day furore, remained on the ground while multi-layered barricades and concertina wires remained in place along with iron nails studded on roads to prevent any movement towards Delhi.

Drones have also been deployed to monitor the protesters.

Farmers from Punjab, Haryana and Uttar Pradesh have been camping at Delhi's borders seeking the repeal of the three agriculture laws.

They claim that the new laws will weaken the minimum support price (MSP) system. But the government says the laws will only give farmers more options to sell their produce.