When PM Narendra Modi announced the decision to repeal the three contentious farm laws on November 19, many media houses and political pundits couldn't wrap their heads around it.

Although this TV news anchor didn’t break down and cry, he was almost on the verge of tears when he reacted to the Prime Minister’s proclamation regarding the rollback of three contentious farm laws.

On November 19 morning, the anchor from a top Hindi channel — it was launched by one of the largest media conglomerates in the country recently — appeared on his YouTube channel, exasperated just like a wounded warrior who has a broken sword in his hand and whose commander-in-chief had just surrendered, abandoning him all alone in the battlefield.

Hours later, putting up a brave face, he appeared on the TV screen with his regular programme which loosely translates as “nationalism”. With a pertinent question whether it was the prime minister’s masterstroke or a majboori (compulsion), he commented on home minister Amit Shah’s welcome tweet on PM Modi’s announcement. And he asked, “Home Minister has stated that it’s remarkable statesmanship. Then why did this move take so long? The Prime Minister says he couldn’t make some farmers understand. Try to understand this ‘some’… He said, ‘there must have been some shortcoming in our Tapasya (devotion)’. Why couldn’t he do a little more Tapasya, why did he revoke the laws?” As he continued, many quipped and later commented on social media, “He has become a rebel.”

Other high-flying editors from the same media stable too had a crash-landing. Otherwise known for holding shouting matches in the name of debates and their animated commentaries aimed at defending majoritarian politics, suddenly they were voiceless. Shocked by the repeal of the farm laws, they wondered if the government would succumb to the popular protests against the Citizenship (Amendment) Act 2019, National Register of Citizens and revocation of the special status of Jammu and Kashmir as well? Some wondered about the fate of the proposed Uniform Civil Code.

Then, on their TV shows, they also described the government move as a disastrous defeat of the long-pending agrarian reforms. Questioning whether the country had lost in the victory of politics around three laws, they suggested that the second green revolution had got derailed in the country.

It was not the only media house. Many pundits had a hard time wrapping their heads around what Modi stated in his address to the nation on November 19. As the carefully-crafted hashtags, which proclaimed that the Prime Minister chose national interest above everything else, trended across TV screens and social media platforms, the frustration among the media supporters of the farm laws seemed not completely misplaced. TV anchors started struggling to make sense as to who had won the long-drawn battle — the fake farmers or the middlemen masquerading as farmers, the separatist Khalistani terrorists or the “Andolanjeevis- Parjevis”, who just jump into any protest agitation as and when an opportunity comes across.

Within no time, articles appeared on websites, claiming that the laws were repealed to thwart the foreign hand, which could have destabilised the country. Others went to the extent of explaining the Prime Minister’s love for Sikhs — something, they said, that made the Prime Minister pick up Guru Nanak Jayanti to announce his decision. Incidentally, the Kartarpur corridor was also reopened on the same day.

In certain primetime theatrics, their laments were loud and clear — the powerful government has done a prostration before the purported anarchists and anti-national elements. The news anchors came across as sulking children and struggled to tame their tempers. A few editors took to social media, wondering “what next?” An editor dubbed the decision a sign of a “weak democracy” and forgot to comment on draconian laws invoked against protesters in the past over 11 months.

A journalist took to Facebook and looked at the revocation through the prism of larger geopolitics of the region. “In 1989-90 and then once again in 2021, the US handed over Afghanistan to its mercenary army of Pakistan and jihadi Taliban. In 1989-90, the Indian state capitulated before Islamists of Kashmir. In 2021, the state capitulated before the Sikh/Hindu rioters of Punjab. Not much has changed,” she wrote.

The agitation also saw how the weapon of fake news was deployed. Alt News, a top-ranking fact-checking website in the country, debunked several viral fake videos, misleading pictures and conspiracy theories. On January 26 as some protesting groups entered the iconic Red Fort and hoisted flags from some domes and from a flagstaff used to unfurl the Tricolour on Independence Day, the agitation had come under fierce media attack for allegedly taking down the national flag and replacing the Tricolour with the Khalistan flag. But the website within hours of the incident debunked all the false claims of media and right-wing social media users.

Two days later, in another news report written by founding editors of the news website, Mohammad Zubair and Pratik Sinha, showed how BJP workers allegedly posed as local residents protesting against farmers at the Singhu border to demean the protest sit-in that started on November 26 last year. In the past year, a significant section of media demonstrated scant regard for professional ethics and sanity. The protesting farmers were lampooned, maligned and attacked for allegedly acting against national interests and putting national security in peril in their opposition to the so-called “agrarian reforms”.

Incidentally, on the World Press Freedom Index, India was once again placed in the 142th spot among 180 nations, which is counted among the countries classified as “one of the world’s most dangerous countries for journalists”, according to the international journalism not-for-profit body, Reporters Without Borders.

Recent years have seen academics, activists and lawyers who have devoted decades of their life fighting for rights of the dispossessed, deprived and disadvantaged, being regularly labelled as “Urban Naxals”. To justify their hate speech against people who are ideologically different from them, these hashtag journalists pretend to be fighting anti-nationals. A sting operation by the website Cobrapost in 2018 had exposed how several media outlets had purportedly agreed to polarise voters in the run-up to the 2019 general elections.

Not so surprisingly, Chief Justice of India NV Ramana recently lamented that debates on television channels were creating more pollution than anybody else.

On the other side, while the alternative media played a critical role in the coverage of the movement, the agitating farmers launched their own newspaper and website, Trolley Times, to counter the propaganda. Describing them as “Godi Media”, the protesters even shooed away many TV news anchors from the protest sites at the Delhi border. 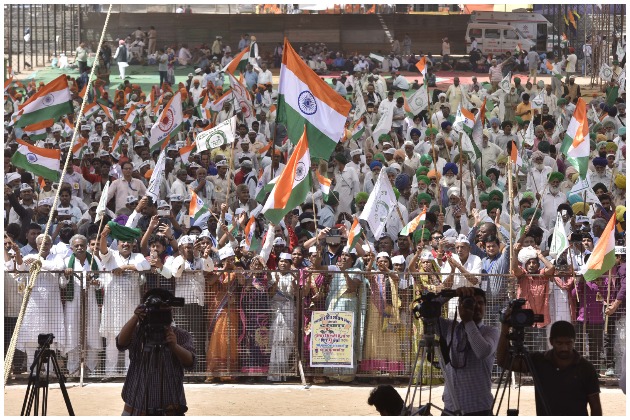 Many journalists covering farmers’ stir had to face harsh stern police action for performing their professional duties. Vinod K Jose, the executive editor of The Caravan, shared his experience in a social media post, “Caravan was at the forefront of covering farm protests, from longforms to on-the-spot stories, some of which led to sedition cases against us across India! Ten sedition cases. Yours truly for example is out on bail from the Supreme Court. Our regular contributor Mandeep Punia was arrested and sent to jail for his fearless coverage.”

In June this year, The Caravan published a report, “Media misreported my ordeal to defame farmers’ movement”: Tikri sexual-harassment survivor, explaining how the ordeal of a 29-year-old chartered accountant was exploited by a section of influential media to defame the protest. Soon after sending legal notices to OpIndia and CNN News18, the survivor had told the Caravan journalist Jatinder Kaur Tur, “They never consulted me before writing these false stories and sensationalising the whole matter with the usage of words like rape and molestation.”

Consider the Singhu border lynching case which was weaponised against the farmers’ movement. The gory incident was milked to the hilt by the majority of TV news channels to target farmers’ movement. But they chose to turn a blind eye towards the account of the victim’s family and other important facts that emerged later.

Earlier in February this year, a journalist announced his resignation from ABP News during farmers’ mahapanchayat in Meerut on Saturday. “I don’t want this job. I wanted to work because I wanted to speak the truth. And I wasn’t allowed to do it,” Rakshit Singh, who covered banking and finance for the channel, was quoted as saying by the Indian Express.

Apart from the media, several ministers in the Modi government and those who enjoy the patronage of the current regime have also been attacking the protesting farmers. Padma Shri Kangana Ranaut, took to Instagram Stories and described the rollback as “Sad, shameful, absolutely unfair”. Invoking Islamophobia, she added, “If people on the streets have started to make laws and not the chosen government in the Parliament, then even this is a jihadi nation.” In another post, she also suggested genocide of the “Khalistani terrorists” as conscientious users raised questions about Instagram’s rules against hate speech.

In the past, several ministers and senior BJP leaders made comments that sought to demonise the protesting farmers. Union minister Narendra Singh Tomar had stated that crowds on the roads won’t lead to revocation of laws, Union Minister Piyush Goyal had alleged that the agitation had been hijacked by Maoists. Questioning the legitimacy of the farmers’ protests, Union Minister VK Singh had said that the demonstrators didn’t look like farmers. Akshayvar Lal Gond, the BJP MP from Bahraich, Uttar Pradesh, called Bhartiya Kisan Union chief Rakesh Tikait a “dacoit”.

While Union minister Rattan Lal Kataria mocked the plight of the protesters, BJP leader and Karnataka Agriculture Minister BC Patil had gone a step ahead, maintaining that only weak-minded people committed suicide.

Similarly, JP Dalal, the BJP leader and Haryana Agriculture Minister, and Raosaheb Danve, another Union minister, had claimed that China and Pakistan were behind the ongoing protests by farmers. Another ruling party leader, Manoj Tiwari, who is Delhi BJP MP and former president of the party's state unit, had commented that “Tukde-Tukde Gang” was trying to turn the farmers’ stir into a Shaheen Bagh, which was the hub of the agitation against the citizenship amendment act.

As the riled-up media continues to question the protesting farmers’ decision to stay put at the protest sites until Parliament formally revoked the three laws in the upcoming budget session, a leading Hindi daily, Dainik Jagran, which is well known for its pro-establishment bias, published a cartoon on November 20. It showed a person with tricolour draped around his neck and a newspaper in his hands, telling another person, who sports a saffron muffler, “Ab Kissan netaon ki maang hai ki sansad ka agla satr bhi hum he chalainge — Now the farmers’ leaders are demanding that they be allowed to run the next session of the Parliament.”

As the dark black dominates the darbaris and their media lackeys, a viral cartoon on social media captures the irony in the predicament of pliant media journalists: A TV reporter with a microphone in front of the camera has been shown in two side to side frames. In the first frame, the reporter rants, “Farm laws are here! Master Stroke.” And in the second frame, the same reporter with his head buried in the sand shouts, “Farm laws are gone! Master Stroke.”