Earlier in the day, Fadnavis thanked Ajit, MLAs, and Independent legislators for their support. 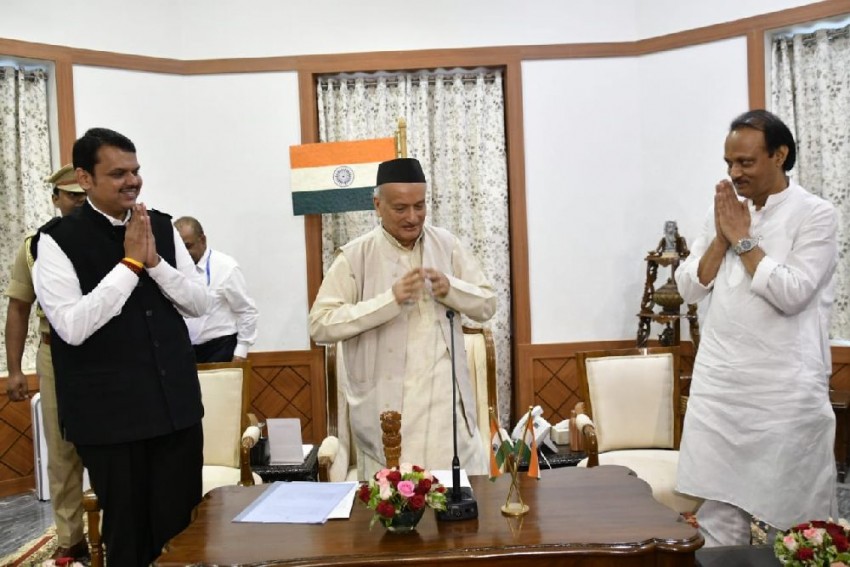 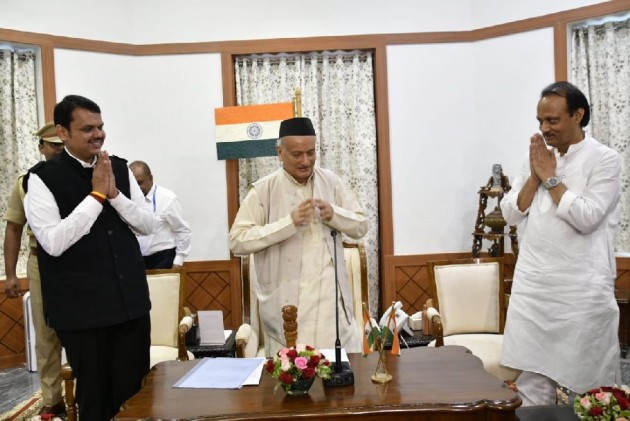 In an unprecedented twist to the Maharashtra plot, Bharatiya Janata Party (BJP)'s Devendra Fadnavis was on Saturday morning administered the oath of office with Nationalist Congress Party (NCP)'s Ajit Pawar taking oath as his deputy, leaving the entire country in utter shock.

Addressing a gathering at the party office in the afternoon, Fadnavis said, "Modi hai to mumkin hai (Everything possible under the leadership of PM Narendra Modi)".

Fadnavis thanked Ajit, MLAs, and Independent legislators for their support.

"Indeed, some friends are not with us anymore," he said referring to the Shiv Sena, which fell out with the BJP after assembly poll results over its demand for rotational chief ministership.

On Saturday evening, Ajit was sacked as the NCP legislature party leader at the meeting called by Sharad Pawar. Jayant Patil will now replace Ajit and lead the party in Maharashtra assembly.

The Sena-NCP-Congress coalition on Saturday night moved the Supreme Court calling the governor's invite to the BJP, calling it "illegal". The alliance repeated they had the required numbers to form the government.

But Fadnavis' oath ceremony came as a shock to the three parties, which were preparing to stake claim to form the government just last night. Congress said the political developments in the state were tantamount to "murdering democracy".

Senior Congress leader Ahmed Patel said the "clandestine" manner in which Devendra Fadnavis was sworn in as chief minister of Maharashtra and NCP's Ajit Pawar his deputy will be written in black ink in the state's history, adding that a government of the Shiv Sena, the NCP and his party will be formed in the state.

Patel also dismissed allegations that the Congress delayed formation of a prospective alliance government by withholding its consent for such arrangement.

He accused the BJP of crossing the limits of "shamelessness" and "shattering" democracy after the Amit Shah-led party formed the government due to coup by NCP chief Sharad Pawar's nephew Ajit Pawar.

Patel, however, said the Sena-Congress-NCP combine will defeat the BJP during the floor test, and the alliance of the three parties will form the government.

Later, addressing a press conference, Congress spokesperson Randeep Singh Surjewala said the BJP "scared" an "opportunist" Ajit Pawar, the NCP leader who has joined hands with the saffron party and acted as "contract killer" of democracy.

NCP president Sharad Pawar said his nephew Ajit Pawar's decision to join hands with the BJP to form a government in Maharashtra was an act of indiscipline and attracts provisions of the anti-defection law.

"Ajit Pawar's decision is an act of indiscipline. No NCP worker is in favour of the NCP-BJP government. NCP MLAs who support the BJP should know this move attracts provisions of anti-defection law," he said.

Union Law Minister Ravi Shankar Prasad, too, came down heavily on the opposition for attacking BJP and Ajit Pawar, saying a the NCP-Congress-Shiv Sena "conspired" to wrest control of the financial capital of the country through back door.

In the wee hours of Saturday, the government invoked Rule 12 of its transaction of business to bypass the need of Union Cabinet's nod for revocation President's rule in Maharashtra, Officials told PTI.