Drone Shot In Jammu Was Assembled, Parts Were Made In China, Taiwan, Hong Kong: Police 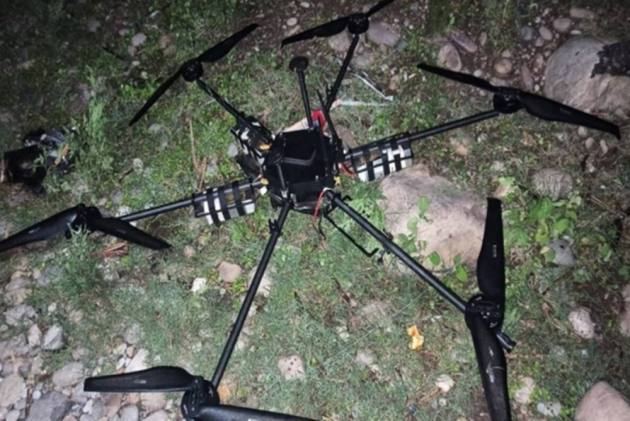 The drone that was shot down in the Akhnoor sector of Jammu early Friday morning was assembled and made in China, Hong Kong, and Taiwan, the Inspector General of Police Jammu range, Mukesh Singh said. He said, in the past one and half year Jammu and Kashmir Police have recovered ammunition dropped through 25 drones. The payload is dropped by militant organizations Lashkar-e-Toiba and Jaish Mohammad through the drone sorties.

“We got specific input last night that Jaish Mohammad is going to drop a payload through a drone in the Akhnoor sector. On this specific information, Jammu and Kashmir Police team reached there and laid an ambush. At around 1 a.m. one drone was spotted. The police fired at the drone when the latter lowered its height to drop the payload. The drone was containing a payload of 5 kg weight and it was packed. It was carrying an IED. Only the wires of the IED were to be connected to create an explosion,” Singh said addressing a press conference.

The IED dropped through the drone was covered in good packing and it was supposed to be picked up their contact, he said. “But before that, we shot down the drone. We have placed an anti-drone system at vital places. We have secured VIPs and others. Drones are posing threat and we are working to tackle this threat,” he said. He said with the shooting down of this drone a huge incident has been averted and further drone sorties through this drone had been stopped.

The security forces have recovered 16 AK-47 rifles, three M4 USA-made rifles, 34 pistols, 15 grenades, and three IEDs dropped through the drones, so far. He said through some drone sorties currency was also dropped. “We have recovered around Rs 4 lakh,” he said.

The Jammu Police chief said the preliminary analysis of the drone indicates that it is a hexacopter having six fans with a flight controller and GPS intact. “Interestingly, the serial number of the flight controller of this drone has the only one-digit difference with a drone which dropped in Kathua a year ago. This shows militants organizations operating from across have got several flight controllers of one series of drones and they place them at different drones and send them to this side,” Singh said.