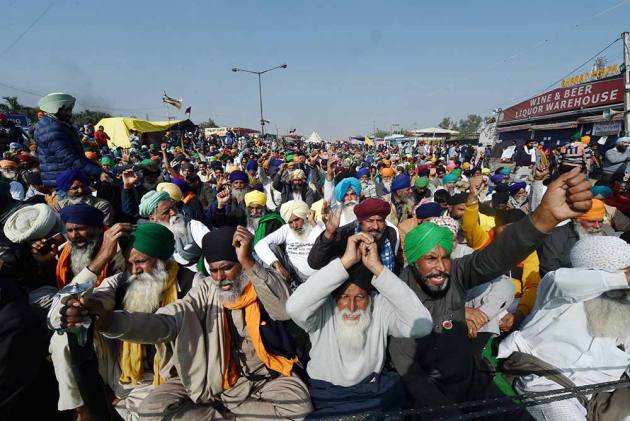 Prime Minister Narendra Modi’s grand gesture of announcing the release of Rs 18,000 crore for PM Kisan scheme on December 25, under which around 9 crore registered farmers get Rs 2,000 at four-monthly intervals, has failed to appease agitating large farmer groups who have urged the government not to treat them as “beggars”.

Hannan Mollah, general secretary, All India Kisan Sabha, described the Prime Minister’s announcement, marking the birth anniversary of former Prime Minister Atal Bihari Vajpayee, as “chewing the same old chewing gum” as there is nothing new in his latest message.

Haryana Bhartiya Kisan Union president Gurnam Singh Chaduni said the release of additional funds for direct benefit transfer to farmers is nothing new,  “nor does it in any way address our demands or our concerns”.

Ball In Your Court: Farmers Ask Govt To Come Up With Proposal, Not 'Love Letters'

Looking forward to further talks with the government “on farmers agenda”, Chaduni states it is important that there is an early resolution on the demand for the repeal of the three new farm laws and making sure that farmers get a fair price for their produce by making minimum support price (MSP) mandatory on private sector buyers too.

Stressing the importance of MSP demand, Chaduni cited the example of a small paddy farmer who should be getting Rs1,870/quintal, which is the government declared MSP, but if the government is not procuring his stocks, like most farmers he is unlikely to get more than Rs 1,200/quintal. If the farmer’s paddy production is 20 quintals, his loss would be Rs. 13,400, which is far more than the “dole” being given by the government.

“What we are asking is a fair remunerative price rather than alms. We are not beggars to be happy that the government is giving us Rs 6,000 per annum nor are most of the farmers strong enough to fight against traders and corporates to get a fair price. The case of the paddy is true of most crops which is why we are insistent on the government making MSP mandatory for private sector buyers too,” said Chaduni.

Expressing keenness for the resumption of talks with the government, Pushpendra Singh, president, Kisan Shakti Sangh, said it is unfortunate that the Prime Minister has remained silent on the issue of making MSP mandatory for all.  “The offer of further talks to resolve the impasse is, however, welcome as without dialogue nothing can be resolved. We would like the government to find a solution that is agreeable to both sides without compromising farmers’ interests or making the government lose its face or hurt the interests of consumers,” said Singh.

The farmer leaders said while the amendments proposed in the three farm laws are welcome, the government has so far done nothing to address the core issue of ensuring that farmers get remunerative prices for their crops. “In the agenda proposed by farmers, the issue of MSP carries 90 per cent weightage and is thus the core of our demand,” emphasised Singh.

The seven-month-long farmers protest over the new farm bills has resulted in thousands of them pitching tents at four border posts of Delhi despite the cold weather. No early solution seems to be in sight with both sides unwilling to ease their position. It appears the Supreme Court intervention could help provide a face-saver if it agrees to direct stalling the implementation of the new laws till an expert committee is able to give its recommendations.

Chudani said despite the government’s effort to project a pro-farmer approach, the fact is that the government’s apathy toward agriculture and average farmers has become more pronounced. Instead, corporate interests are being promoted.

Farm leaders also pointed out that from a share 14 per cent in the budgetary allocation during the first Five Year Plan, the allocation to promote and support agriculture in India is now barely 2 per cent. Many agriculture experts also point out that while most countries, including the US, EU member nations and many African countries continue to subsidise the farm sector, in India, there has been a steady withdrawal of state support whether for fertilisers, power, or marketing.