Home  »  Website  »  National  »  Key Highlights: Will Do Whatever I Can To Mediate Between India & Pak, Says Trump On Kashmir

Key Highlights: Will Do Whatever I Can To Mediate Between India & Pak, Says Trump On Kashmir

The US President was accorded a ceremonial welcome at the forecourt of Rashtrapati Bhavan at 10:00 am. The ceremony will be followed by a visit to Rajghat, where he will pay tributes to India's Freedom Fighter Mahatma Gandhi. 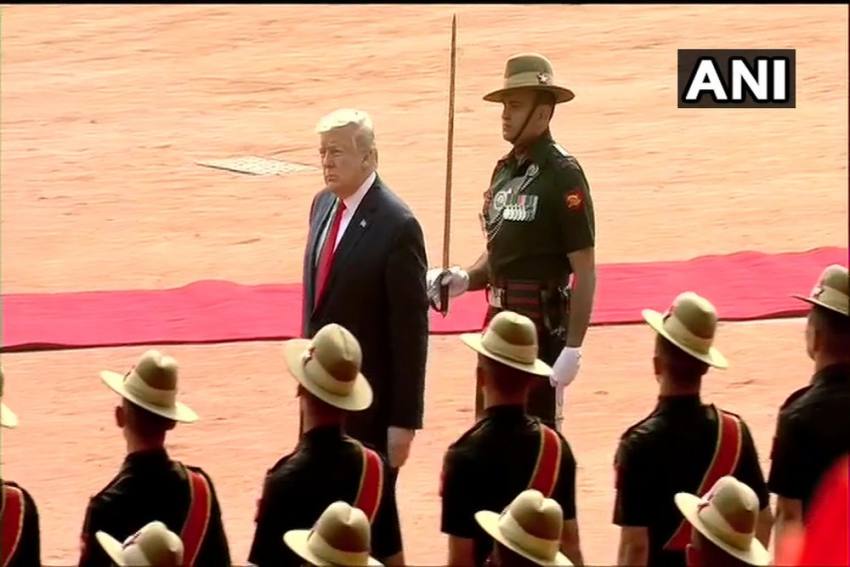 President Donald Trump inspects the guard of honour in the forecourt of the Rashtrapati Bhavan. (ANI)
Outlook Web Bureau February 25, 2020 00:00 IST Key Highlights: Will Do Whatever I Can To Mediate Between India & Pak, Says Trump On Kashmir 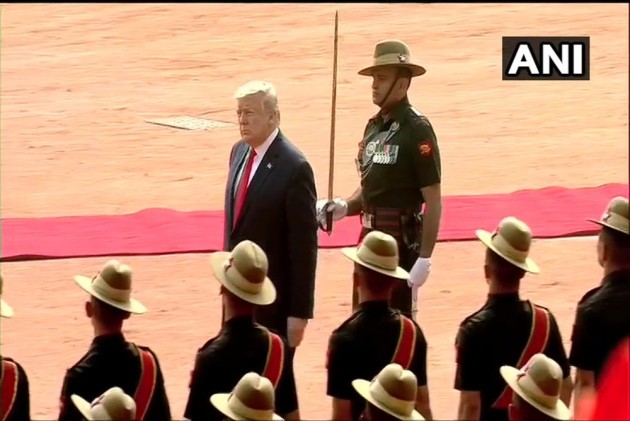 US President Donald Trump will have a packed schedule on Tuesday in New Delhi, where he arrived last evening on the last leg of his India visit.

The US President was accorded a ceremonial welcome at the forecourt of Rashtrapati Bhavan at 10:00 am. Trumps then visited Rajghat, where they paid tributes to Mahatma Gandhi.

Here are all the Key Highlights:

6:23PM: Donald Trump says he has good relations with both India and Pakistan and he is ready to do whatever he can to help in Kashmir.

US Pres on being asked about terrorism emanating from Pak: We talked a lot about it today. I said I will do whatever I can do to help as my relationship with both gentlemen (PM Modi&Pak PM) is so good...Anything I can do to mediate/help, I'd do. They (Pak) are working on Kashmir pic.twitter.com/RtCkbeuAqZ

US President Donald Trump on US peace deal with Taliban: Yes, I spoke to PM Modi on it. I think India would like to see it happen. We are pretty close. Everybody is happy about it. pic.twitter.com/8Ga1BTZbYj

5:48PM: Donald Trump says he did not discuss the violence in North-east Delhi with PM Modi.

US President on violence in North East Delhi and CAA: We did talk about religious freedom. The PM said he wants people to have religious freedom. They have worked really hard on it. I heard about the individual attacks but I did not discuss it. It is up to India. pic.twitter.com/p0hEYfqhU1

5:33PM: Addressing the media, US President Donald Trump says the coronavirus situation in US is under control.

4:18PM: Issue of CAA didn't come up during Modi-Trump talks. There is appreciation from both sides that pluralism, diversity binding factor, says Foreign Secretary Harsh Vardhan Shringla on talks on CAA and religious freedom. Talking about the H1B visa, he said, "Indian side raised issue of H1 B visa and highlighted the contribution of Indian professionals in IT sector."

4:06PM: Some of the regulations have to go through statutory process; we are going to reduce a lot more regulations, says Donald Trump during Q&A with India Inc.

3:54PM: Speaking to India Inc, US President Donald Trump says, "I feel I am going to win the coming elections; when we win, markets will go up."

3:45PM: China Coronavirus Under Control: Trump | China is working very hard to contain coronavirus; it looks like they are getting it more and more under control, says US President Trump.

2:08PM: Donald Trump says US exports to India have increased by 60% in the last three years.

US Pres: Our teams have made tremendous progress for a comprehensive trade agreement & I'm optimistic we can reach a deal of great importance to both countries. Since I took office, US exports to India are up nearly 60% & exports of high quality American energy have grown by 500% pic.twitter.com/ooGmOQCqpU

1:49PM: Donald Trump announces sale of US defence equipments worth $3 billion to India.

US President: Earlier today we expanded our defence cooperation with agreements for India to purchase more than US$ 3 Bn of advanced American military equipment, including Apache & MH-60 Romeo Helicopters - finest in the world. These will enhance our joint defence capabilities. pic.twitter.com/TD6xMTx20q

1:39PM: PM Modi says US and India are working on a big trade deal.

PM Modi: Our commerce ministers have had positive talks on trade. Both of us have decided that our teams should give legal shape to these trade talks. We also agreed to open negotiations on a big trade deal pic.twitter.com/cBT7IP0L09

1:34PM: Addressing a joint press conference with US President Donald Trump, PM Modi says, "This is the fifth meeting between me President Trump in the last eight months. Relations between India and US are not just between countries, but between people. This will turn out to be the most important strategic partnership of the 21st century. Increasing defence cooperation between the two countries is very important for this strategic partnership. We are also working on increasing cooperation on homeland security and terrorism."

Delhi: Students of Sarvodaya Co-Ed Senior Secondary School in Nanakpura, gift Madhubani paintings made by them to First Lady of the United States Melania Trump. pic.twitter.com/f7yiQiwmaT

1:16PM: After attending a happiness class at Sarvodaya Co-Ed Senior Secondary School in Nanakpura, First Lady of the United States Melania Trump said, "Namaste! It's a beautiful school. Thank you for welcoming me with a traditional dance performance. This is my first visit to India, people here are so welcoming and so kind."

12:30 PM: President Donald Trump and Prime Minister Narendra Modi are currently at Hyderabad house jointly addressing the media. PM Modi thanked Trump for taking out time to pay a visit to India despite a busy schedule back home ahead of elections in November 2019.

11:19 AM: "The American people stand strongly with a sovereign and wonderful India - The vision of the great Mahatma Gandhi. This is a tremendous honor!" Trump wrote in the visiter's book at Rajghat.

11:17 AM: US President Donald Trump arrives at Hyderabad House for bilateral talks with PM Narendra Modi.

10:38 AM: President Donald Trump and Melania Trump have arrived at Rajghat to pay tribute to Mahatma Gandhi.

10: 16 AM: President Trump inspects the guard of honour:

10:10 AM: Ahead of a packed day in the national capital, US President Donald Trump was on Tuesday accorded a ceremonial welcome at the Rashtrapati Bhawan.

9:36 AM: On Tuesday, Trump will hold restricted and then delegation-level bilateral talks with Prime Minister Narendra Modi at the Hyderabad House. This will be followed by the signing of agreements between the two sides and press statement by both the leaders.