As Ladakh, with just two per cent of the state's population, becomes the third division, it will now have 40 separate offices. The decision is based on a host of factors as well as political necessity 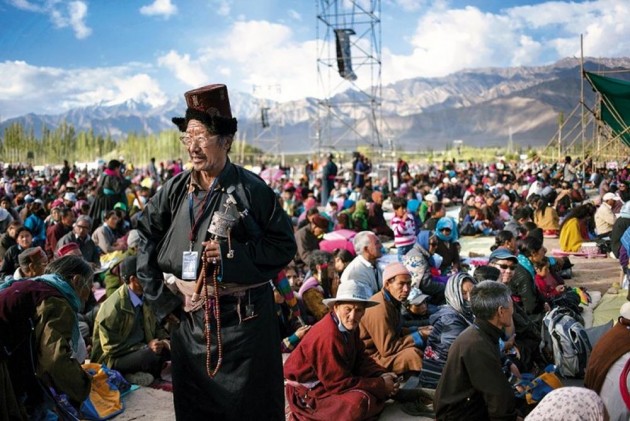 Carving out Ladakh region from the Muslim-dominated Kashmir valley by granting it a separate division status is more than an administrative decision by the Modi government since the state is under President's rule from December 2018.

People in Leh believe it is the culmination of the "Free Ladakh from Kashmir" slogan during the '80s agitation for the Ladakh Autonomous Hill Development Council.

Former Chief Minister and an ex-ally of the Bharatiya Janata Party (BJP), Mehbooba Mufti said with this decision it's becoming clear that the Jammu and Kashmir Governor Satyapal Malik is pursuing the BJP's "agenda".

Jammu and Kashmir state, until this decision, was divided into two divisions: Hindu majority- Jammu and Muslim-majority Kashmir.  Buddhist-majority Ladakh continued to remain under the administrative control of the Kashmir region.

Districts heads (Deputy Commissioners) of two districts of the Ladakh region -- Leh and Kargil -- were under control of the Divisional Commissioner Kashmir, which also routed funds to them allocated by the state.

People of Ladakh, especially Leh, have consistently accused the Kashmir-centric leadership of not being 'sensitive' to their aspirations. They nursed a grievance of being "subjugated".  It erupted in the six-year-long agitation (1989-95) for Union Territory status. Three protesters died in the police firing in 1989.

According the divisional status entails not only sanctioning separate offices of the Divisional Commissioner and Inspector General of Police, but also Directorate and heads of different departments. Such decisions are determined primarily by population. The population of Kashmir Division is 55 lakh, of Jammu Division  44.28 lakh. Ladakh's population is merely 2.36 lakh.

As Ladakh, with just two per cent of the state's population, becomes the third division, it will now have 40 separate offices. The decision is based on a host of factors and as well as a political necessity. In 2014, the BJP had for the first time won the only parliamentary seat from Ladakh.

Last November, Thupstan Chewwang, the BJP MP, resigned on grounds that he was not being taken into confidence on Ladakh affairs. His resignation came a month after the BJP couldn’t win a single seat in the Leh Municipal Committee elections.

There was growing resentment in Ladakh, especially in Leh, that the BJP has backtracked on its promise of granting UT status to the region. The party believes that this decision could now help shore up its political fortunes in the region.

"This decision could never have been taken by a popular government headed by the Kashmiri leadership. The same set of leadership had opposed granting Council to Leh. J&K has three distinct regions and the BJP government has finally accepted and approved it," said BJP MLC and former minister of Ladakh Affairs, Chhering Dorje.

Housing the headquarters of Ladakh region in Leh aims to reverse this equation, and fills into the Modi government's Kashmir policy of reducing hegemony of the Kashmir-based parties in state affairs and politics by insulating it from other regions.

The decision has prompted heated debates on social media. The posts from Kashmir were critical while those from Jammu and Ladakh were welcoming.

These are Muslim-majority regions, comprising four districts, with substantial Hindu population except in Poonch district. Stoking such a demand which doesn't find a parallel with geographically remote Ladakh region has strong religious overtones.

MoS PMO Jitendra Singh said while according divisional status to Ladakh was based on reasons,  those demanding the same in Jammu region where none has existed before are introducing the poison of religious divisive politics.